It’s a whole new world for Naomi Scott as she embarks on her breakout role as Princess Jasmine in the live-action remake of Aladdin, directed by Guy Ritchie alongside Will Smith as The Genie and Mena Massoud as the title character. Although it’s important to note that this isn’t her first acting stint, having been involved in multiple supporting roles on tv and film, but you’ll most probably recognise her from another remake, as Kimberly Hart aka the Pink Power Ranger in the 2017 reprisal.

We’ve been keeping tabs on the 26-year old who’s been gracing the red carpet promoting the latest Disney film, and she’s been proving to be a strong contender for fashion’s new favourite. Below, 10 of her recent looks that we’ve been ogling.

At the recent photocall in Jordan, Naomi stole the show in a high-waisted gold foil skirt from MSGM and a crescent moon printed top from Marine Serre, known for their futuristic designs. Queen Bey approves, too. Naomi definitely has a way of amping up an all-white look with this modern ball gown from Off-White. The demure nature of the floor-length floral-embroidered skirt is balanced with the athleticism of a form-fitted rash guard.

But she looks good in almost every colour

Orange is a tricky hue but the actress pulls it off like a pro in a tulle halter-neck gown from Valentino’s Autumn/Winter 2019 collection which she wore to the Aladdin premiere in Berlin. This is how you make an entrance! 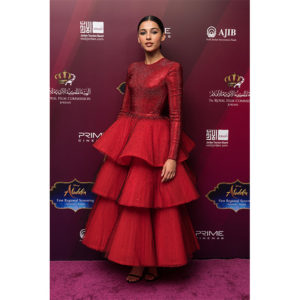 This girl is on fire! Naomi looked red hot in an Armani Privé haute couture creation at the Jordan preimiere. The fitted long-sleeved bodysuit was covered in crystals and was paired with a flouncy tiered tulle skirt for dramatic effect. The young actress proves she can pull off warm and cool tones in this bright cyan suit by Paul and Joe, paired with a turquoise satin shirt and sparkling glittered platforms. We’re living for this ice cold look.

A star is born

At the Met Gala 2019, she chose to honour her British heritage by donning Burberry for her first gala. She wore a black corset top and trousers overlayed with an apron dress made out of PVC, decked in Swarovski crystals on the front and a poof of fluffy feathers on the back.

Naomi looked like a true Disney princess at the London premiere of Aladdin. Her pale powder blue heavily embellished corset is what we imagine Princess Jasmine would wear today. Zoom in on the loose-fitted draped skirt with the faux trouser design!

Don’t be fooled by her ladylike red carpet ensembles. This Brit gets lit when needed. Her sleek, all black and peek-a-boo ensemble from Saint Laurent proves she can definitely do both. 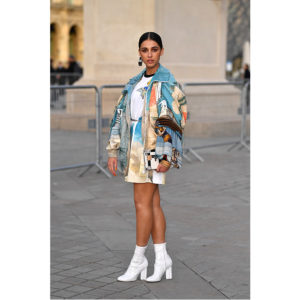