Car Review: I went out with the Mercedes-AMG C 63 S for a week and here's my romantic review

I had the chance to test drive the sedan version of the model for seven days. Find out what I think below—and let me know if you agree

My affiliation (or interest, rather) with Mercedes-Benz begin from a very young age. I will always remember all the childhood episodes with my dad; from speaking about getting a new car to actually being in one. I won't forget about the little joke I told him—that the house is like a mini (emphasis on "mini") Mercedes-Benz museum. I guess this is where one can say, "like father, like son", because of our mutual love for all things Mercedes. Hence, you can imagine my excitement when I was offered the opportunity to take the Mercedes-AMG C 63 S for a drive in Kuala Lumpur. One week in the concrete jungle, to be specific. Did my excitement last until my last day with the car? Well, check out my review of the relationship car and find out. Even the sweetest relationships end, unfortunately. 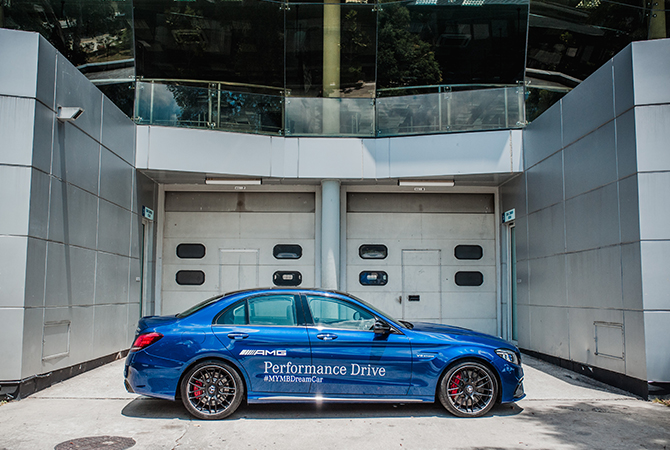 What was it about the C 63 S that swept me off my feet? Let's begin with appearance because first impressions do matter. Even though blue isn't my favourite colour (for many reasons), I was impressed by the brilliant metallic finishing of the C 63 S I first set eyes on. At first glance, it is clear that the C 63 S is very expressive—from the sporty bodystyling to the light-alloy wheels. My perception of the vehicle was elevated by the gorgeous grille at the front. Who doesn't fancy a date with perfect teeth? All in all, I was floored (positively) by the classy and sleek yet sporty outlook of the C 63 S. I was ready to walk down the aisle take it for a ride. 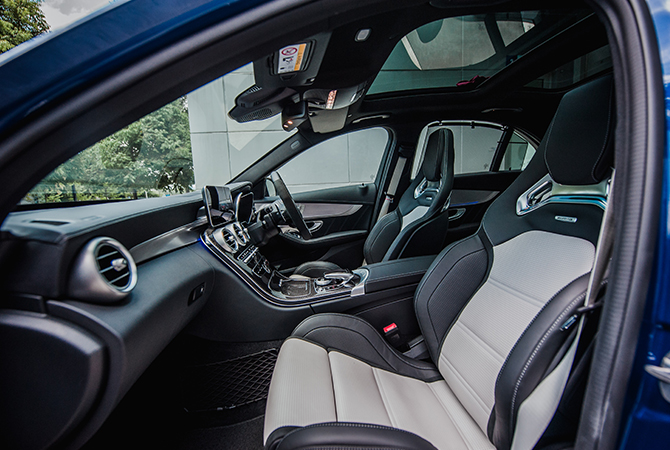 But first, I had to take a glimpse of the interior. Let's all appreciate entities that are as beautiful on the inside as they are on the outside. How about the Mercedes-AMG C 63 S? Did the sedan fit the mold? What first caught my eye was the instant ambience of sportiness that can be felt as soon as one enters the vehicle. The Performance seats for driver and front passenger stood out, especially. Another characteristic that I was really happy with was the steering wheel—a combination of nappa leather with grippy Dinamica microfibre. This meant that the grip was good and controlling the steering wheel was precise. This would end up being really essential during drives because of the power that the car possesses. 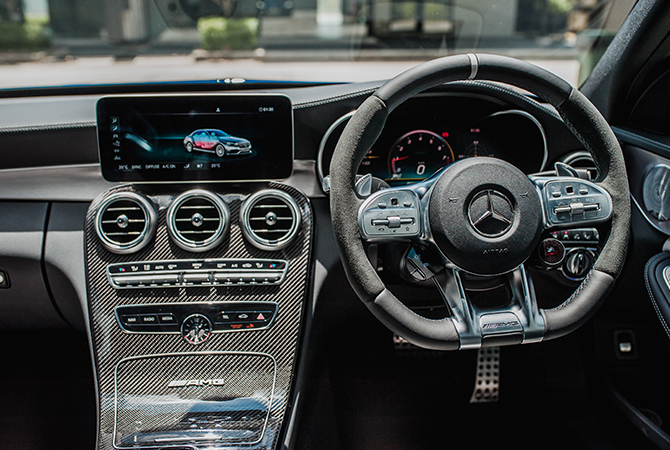 While I usually prefer my dates to be in the driver's seat, I enjoyed the brief period of which I was in charge. Who's the captain now? I am, I am. There is also is the 12.3-inch display system which has a simple interface; and was easy to decipher. Pretty important for anyone that's about to go rather fast in the C 63 S. 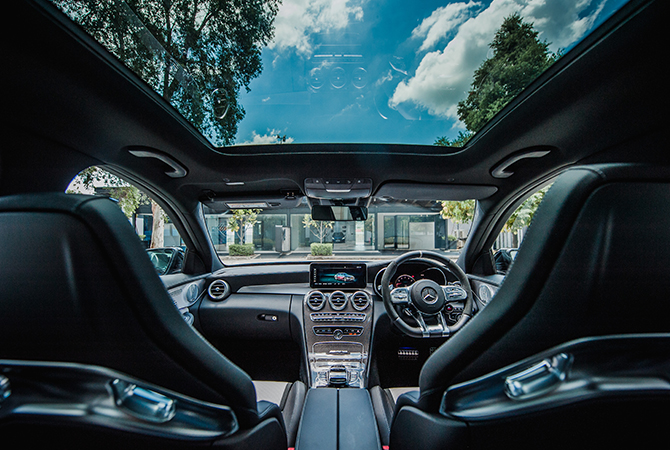 What happened when I turn my date the engine on? Did sparks fly immediately? Were our souls instantly intertwined? Honestly, no. The ignition brought upon a loud roar that, while expected from a sports car such as the Mercedes-AMG C 63 S, took me by surprise. I began to feel uneasy; mainly because I was not familiar with the noise (and the "public commotion" that came later). "It's alright. Let me get to know you first", I said to the car. I did not give up. Here's the thing: I knew my "relationship" with the C 63 S was only going to last for a week. I warned myself not to fall too hard so I was rather reserved in the beginning. For the next seven days, we went out and the C 63 S accompanied me everywhere I went—from the office to the mall. We were inseparable. 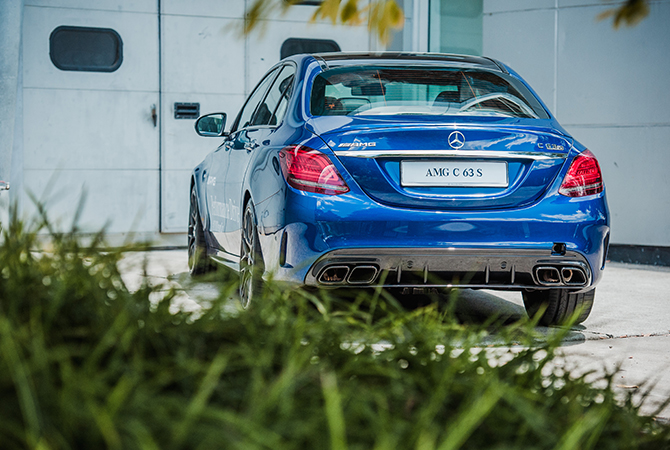 Yes, I wasn't fond of the ongoing noise that "played" whenever the engine's on. The exhaust, well, could get quite exhausting for the mind. Am I getting too much attention? Whether the vehicle's mobile or stationary, it felt as if the body of the car was in constant contact with mini fiery raindrops. However, things took a turn for the better as I soon as I accelerated and drove into the city horizon. I have to be honest—I felt really, really good at the helm of the C 63 S. It's powerful, smooth, and ultimately, easy to maneuver. 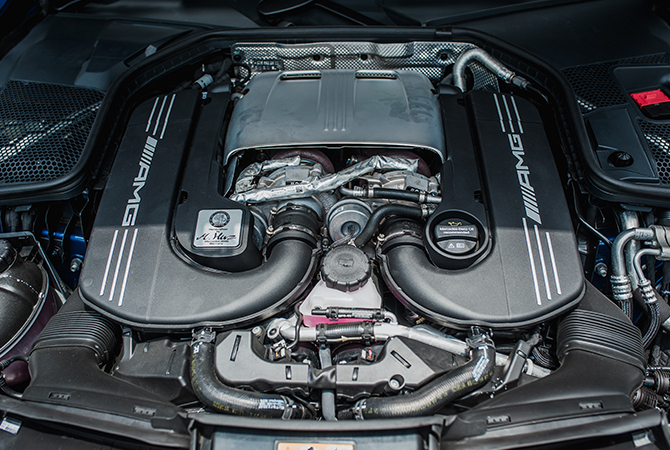 The C 63 S comes equipped with a 4.0-Litre V8 Biturbo Engine—manufactured according to the well-known "one man, one engine" principle. It has a maximum speed of 290 kilometres per hour and has the ability to go from zero to 100 kilometres per hour in 3.9 seconds. Knowing this beforehand, I expected explosive power delivery and the C 63 S did not disappoint. I don't drive a vehicle of such calibre on a daily basis, especially not in Kuala Lumpur; not with the traffic situation. But one thing's for sure is that, in addition to the attention I received on the road, I had one of the best driving experiences of my life. Our time together might be short but I truly enjoyed the ride. Truly. 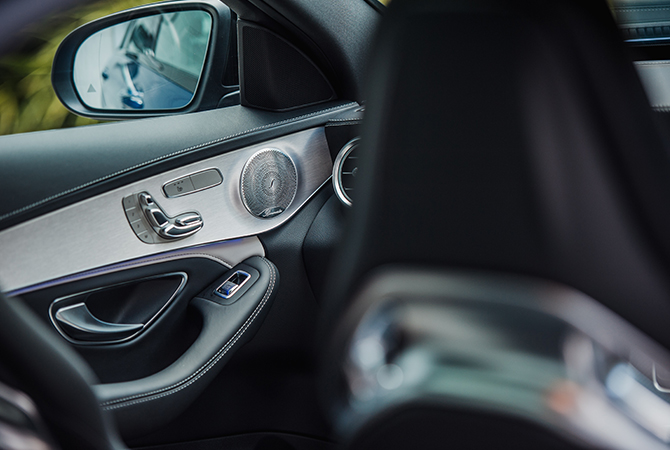 For an entity like the C 63 S, it has to possess top-notch braking ability. Although I didn't have many opportunities to go all out on the speed, I utilised the few I had to test the braking system. The Mercedes-AMG C 63 S uses a ceramic high-performance compound braking system that is characterised by low weight to enhance agility. In my opinion, the system was massively crucial during instances when I had to do quick stops—at traffic lights and the sudden presence of vehicles in my lane. I appreciate the fact that safety isn't neglected. Some features that really assisted me (plus kept my mind at ease) were the 360º degree camera, lane keeping assist, blind spot detection, and the existence of seven airbags. These safety components definitely helped with driving in Kuala Lumpur, especially on the Federal Highway and tight parking spots in certain malls. 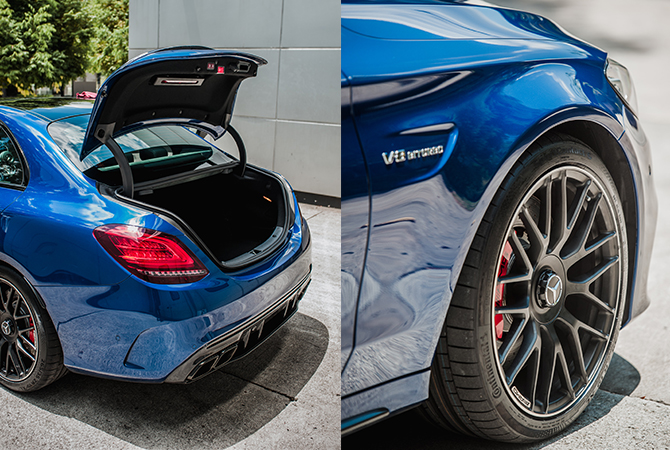 It was a ferocious but wonderful seven days with the C 63 S. From the Burmester surround sound system or the drive modes (Comfort, Sport, Sport+, Individual, and Race), the Mercedes-AMG C 63 S is what one can describe as the epitome of luxury performance. In spite of the mild but noticeable noises that the C 63 S makes, it is still beautiful, polished, well-behaved, eye-catching, and most importantly, extremely drivable (in KL and beyond). I was sad when our relationship ended and we had to part ways. I didn't cry like I did when I watched Next In Fashion but boy did I feel empty for a moment. After all, it was an immensely enjoyable and ethereal week with the C 63 S. Let's just say that the vehicle has tweaked what I look for in a car (for the better) from now on. I did enjoy the car until the very end. It's probably my best relationship so far. I hope my opinions get you thinking and considering but now, it's time to vroom away!