Bvlgari is on a roll. The Italian Maison claims its fifth world record in a row with the Octo Finissimo Chronograph GMT Automatic, the thinnest mechanical chronograph in the watchmaking world to date. Measuring a mere 6.9mm thick (or thin, if you will), the brand new movement at its heart, the Caliber BVL 318, makes it possible with its 3.3mm profile. The spectacular movement is encased in a body made of sandblasted titanium, along with a titanium dial and bracelet to match. Super sleek.

READ MORE: A look at Bulgari’s record-breaking watch from Baselworld 2018 Unlike in 2017, when only 10 pieces of the Zenith Defy Lab was produced, you could very well own a timepiece with the Zenith Oscillator beating at its heart this year. Meet the Zenith Defy Inventor, a technical masterpiece driven by the revolutionary oscillator that replaces thirty or so parts with a single silicon component. While the Defy Lab’s oscillator had a frequency of 15 Hz, the Defy Inventor beats at a higher frequency of 18Hz with a power reserve of 50 hours. As opposed to a full Aeronith (a unique aluminium-polymer composite) case, only the bezel is made of the textured material, sitting atop an ultra-lightweight titanium case. A few hundred units (they didn’t specify how many) will be manufactured. The honour of being Chopard’s flying tourbillon debut goes to the L.U.C Flying T Twin. It may not be a technical breakthrough in the industry, but it is a technical first for the brand, and what an elegant entrance it is. At the heart of the timepiece is the Calibre 96.24-L with a flying tourbillon, an automatic movement fitted in an ultra-thin 40mm case made of Fairmined rose gold. The finesse of the movement is reflected in the dial, where a hand-guillochéd outer ring encircles the central medallion with a beautiful honeycomb motif. Collectors take note—the L.U.C Flying T Twin is a limited edition of just 50 pieces. Trust H. Moser & Cie to combine a flying tourbillon and a minute repeater—on the dial side, no less—while keeping the dial clean and uncluttered; creating a treat to both the visual and hearing senses. It is a technical feat really. For example, the chimes have been curved so as to not interfere with the flying tourbillon, while the case middle was widened as much as possible in order to accommodate the movement and allow enough space to create a soundbox. What you get is a flying tourbillon that seemingly suspends in mid-air at 6 o’clock and a minute repeater mechanism that chimes beautifully all encased in H. Moser & Cie’s understated style. This re-edition is as true to the original Breitling Navitimer from 1959 as it gets. The Navitimer should be familiar to most pilot’s watches enthusiasts, known for its classic design which combines a chronograph with a rotating slide rule beaded bezel—an innovative feature that allowed pilots to make all critical flight calculations. On the outside, it is pretty much a carbon copy of the 1959 design, except for the use of Superluminova in place of radium. Other upgrades came in the form of water resistance, which has been increased to 3 bars (30 metres), and most notably a brand new movement, the calibre B09, a hand-wound COSC-rated chronograph based on the brand’s renown calibre 01. Taking inspiration from the original Autavia models, which ceased production in 1985, TAG Heuer introduces a brand new line that pays tribute to the line’s motorsports and aviation heritage (automobile + aviation = you get the picture). The Autavia Isograph features the rounded first-generation Autavia case and bevelled lugs from the ’60s, standing at 42mm with either a ceramic or stainless steel bezel and an oversized crown which references the functionality of pilot’s watches and timers. Driving the timepiece is the carbon hairspring-equipped Calibre 5 movement. The collection come in seven references, including two models in bronze.

Housed in Bell & Ross’ emblematic BR 03-92 square case, this new release is an homage to what is perhaps the most unusual aviation inspiration yet—the MA-1 flight jacket. Unusual, but interesting. The main talking point of the MA-1 is most definitely its reversible feature, with its orange lining doubling as a wearable beacon while a downed pilot was waiting for search and rescue. The BR 03-92 MA-1 keeps true to the colour codes of the lifesaving tool, bearing a case of dark khaki ceramic and a matching sandwich dial, stencilled for the orange luminescent numerals and indications to peak through. And just like the jacket, the calfskin strap is reversible, khaki on one side and orange on the other. When the J12 was introduced as Chanel’s first automatic watch back in 1999, it didn’t just pave the way fashion houses looking to establish themselves in the watchmaking world, it also sparked the trend of high-tech ceramics in timepieces. 20 years on, the J12 gets a makeover to celebrate its two-decade milestone—nothing drastic, but just enough for the icon to be the best version of itself. From the front, you’ll see that the dial opening was increased slightly and the numeral typeface redesigned for a more refined aesthetic. Flip it over and the biggest upgrade will be visible: the all-new 12.1 calibre automatic movement, specially developed by Kenissi Manufacture, takes centre stage through the sapphire crystal caseback. The movement is chronometre certified by the COSC with a 70-hour power reserve. It is the timepiece embodiment of a beauty with brains.

READ MORE: All the reasons to love Chanel’s J12 collection

OUT TO INDUCE DIAL ENVY Last year, Rolex released the GMT-Master in steel with a Pepsi bezel and Jubilee bracelet. Here comes the dressier version, decked in white gold and a Meteorite dial—it is the first time Rolex is using the material on a GMT. Not the most common combination for sure, but definitely eye-catching. On the inside is the same COSC-certified automatic calibre 3285 movement that can be found in its predecessor. Just look at that gorgeous texture. Sitting at the pinnacle of four new Spring Drive releases in celebration of the unique movement and line’s 20th anniversary, the SBGZ001 sports a beautiful “snowflake” pattern dial with a hand-carved platinum case that complements the dial finish, and hands and hour markers made from 14k white gold. Driving the stunning timepiece is the new calibre 9R02 with an 82-hour power reserve. The two-tone dial has really been making its rounds in the watch world as of late, and there are few ways better to take on the trend than with a Tudor Black Bay Chrono—now available in an S&G (steel and gold) version too. What we have here is an elegant diver’s timepiece with the hands, pushers and bezel all made with yellow gold. On the dial, hollowed counters in champagne gold contrast handsomely against the domed matt-black backdrop. What we love about the dial on the Ref. 5212A-001 Calatrava Weekly Calendar is how it packs so much information—time, day, date, month and the number of the week in the year—yet it still looks so clean and sophisticated. The choice of case style, dial finish and typography come together to give it a polished vintage aesthetic. Hublot has always been associated with the bold and audacious, but this collaboration with Ferrari takes it to another level by straying from the manufacture’s signature angular silhouettes—without taking away any of the attitude, of course. The Unico self-winding flyback chronograph movement is integrated into a 45mm Classic Fusion case, but thanks to the raised convex profile, it wears smaller (read: more wearable) than you would think. Designed by the masterminds behind the Ferrari Monza SP1 and SP2, the Classic Fusion Ferrari GT draws inspiration from the GT designed and crafted in the Maranello workshops. Dynamic curves aside, the famous Prancing Horse appears at 12 o’clock, and red accents pay stylistic homage to the legendary luxury brand. To be fair, MB&F has never been one for conventions. With the Legacy Machine FlyingT, it presents its first three-dimensional horological art pieces dedicated to women. Beneath the extravagant dome of sapphire crystal lies a highly intriguing dial that calls for a double take. In the middle of the dial plate, an asymmetric ventricular opening reveals the heart of the LM FlyingT engine—a flying tourbillon that beats at a serene rate of 2.5Hz. A single diamond sits on the top of the upper tourbillon cage, glimmering as it rotates simultaneously with the tourbillon. The time display is positioned at 7 o’clock, inclined at a 50° tilt so that the time can only be read by the wearer. Hover over the image above to see the incredible profile of the timepiece. 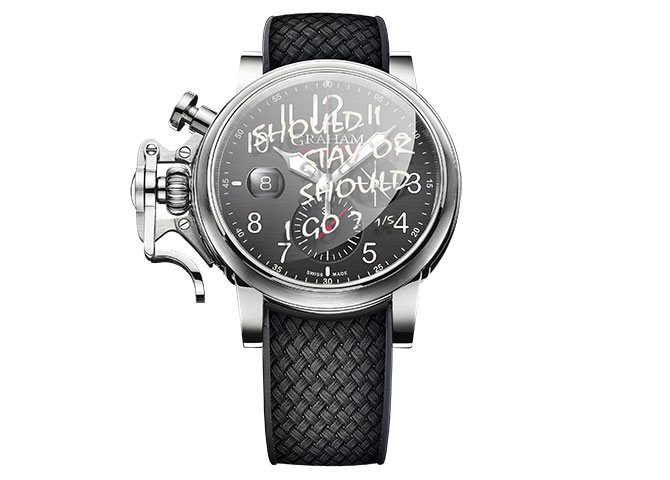 The “Graffiti” featured on this series by Graham are edgy, no doubt. But what makes them stand out further is that instead of being engraved on the dial, as is the norm, the designs are laser engraved on the domed, scratchproof sapphire crystal, teasing the face of time without obscuring it. Armed with the brand’s signature start-stop trigger, this collection comes in five limited edition designs: one features the Chinese character that means “Win” (388 pieces), three different iterations of the skull (50 pieces each), and our favourite, one that poses the famous question from the Clash, “Should I Stay or Should I Go?”. A brand new line by Gucci, Grip naturally draws attention with its unique design. From afar, the silhouette is unmistakably that of a watch. But go nearer and you’ll probably ask, “where is the dial?”. Upon closer look you’ll see that the time is revealed through three windows on the rounded square case, under which holds three white rotating discs indicating the hour, minute and date. The collection comprises of four quartz models. The full-steel and full-yellow gold PVD variants both sport Gucci’s Interlocking G logo on the case, while the steel and yellow gold PVD models with leather straps are kept clean and sleek.