A rare collectible from Baume & Mercier for the racing fan 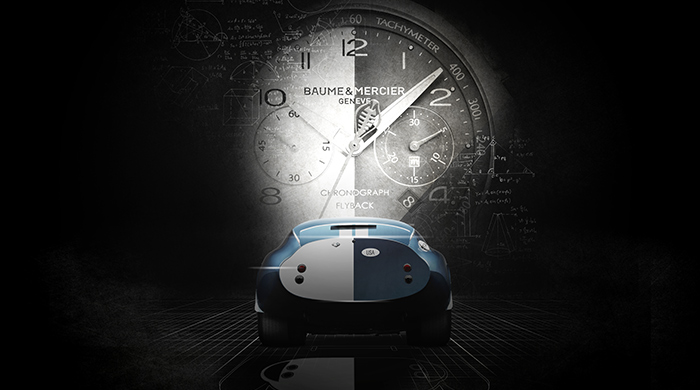 During the early 1960s, a legend was born in the form of the Shelby Cobra Daytona Coupe. It was a car designed by Peter Brock in collaboration with Carroll Shelby that went on to debut at the race circuits and beat other larger race teams including Ferrari at Le Mans.

In a milestone celebration of the Shelby Cobra Daytona Coupe, Baume & Mercier releases a new collection of three limited-edition models. The highlight is the Clifton Club Shelby Cobra with its split blue and white dial to mimic the signature of the car’s half blue/half silver livery. Peter Brock worked closely with Baume & Mercier designer Alexandre Peraldi to give the watch a distinct look.

Powered with a Swiss-made manufacture self-winding movement with flyback chronograph function, you can move from one chronograph reading to another with a single push of the button. Trace your fingers along the edges and you’ll find an exact replica of the foot pedals placed on either side of the crown to control chronograph functions.

The 44mm diameter case is forged in polished/satin-finished stainless steel and titanium. While a red ‘196mph’ in the tachymeters scale is meant to highlight the speed record of the Daytona Coupe. On the rear of the case, you’ll find a sapphire crystal caseback window where you can see the thick automatic rotor that resembles the wheels. The Baume & Mercier Clifton Club Shelby Cobra’s vivid design is complemented with a blue “automotive carbon-like” calfskin strap with rubberised soft-touch calfskin lining and red stitching.