'Top of the Lake: China Girl' through Alice Englert's eyes

Critically acclaimed series Top of the Lake returns for a second season, with Elisabeth Moss reprising the role Detective Robin Griffin. This time, Moss is joined by Nicole Kidman, Gwendoline Christie, Alice Englert and David Dencik in the crime-mystery series. Detective Griffin will be investigating the death of an unidentified Asian girl whose body washed up on Bondi beach. Armed with a formidable cast and intriguing plot, Top of the Lake: China Girl is one to put in your to-watch list.

Here, up-and-coming actress Alice Englert talks about her character on the show to give us a better idea of what to expect come Friday:

Tell us about your character and where she fits into the storyline.

"I play Mary Edwards, the biological daughter of detective Robin Griffin. Adopted at birth by Julia and Pyke Edwards who live in Sydney, Australia where Top of the Lake: China Girl is based, Mary is an intense personality. I think some of that is borrowed from the complication of being an adolescent person and then just the complications of being a human, which is a central theme in Top of the Lake and something that I've thoroughly enjoyed appreciating and examining in the series, as well as being part of something that is complicated and intelligent in its mystery." 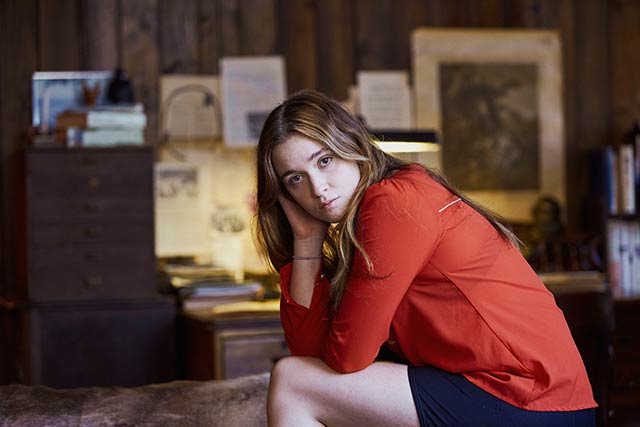 "It's a very interesting time in Mary's life, because there was a moment in the first series of Top of the Lake where Robin revealed that she had a letter from her daughter who was the baby that she had had from being raped when she was 15 years old, and she could not reply to that letter. When we meet Mary, she is in the process of recovering and finding a way to take control of her life post suffering the rejection of not receiving a reply. Mary is interesting because unlike me she has a very strong survival instinct, which can sometimes be mean and can be scary. It's a fight that I think Robin has within her, and it's a strength of a sort. I can't remember the exact quote but Robin's mother said this in Season One: "You mistake this coldness for strength"—and I think that Mary is experiencing that herself when we meet her, the attempt to try and control her life and to feel safe by not being vulnerable anymore."

What was your reaction when you first got the script?

"Reading the script for the first time, I actually cried. I knew I could do the role because every time it said "Mary cries", I was going "oh God". I was moved following the journey of my character and the characters in the story. I have to say, though, that without rehearsal it would've been totally confusing, because it is a very complicated and character-rich series, and there are things that have to be held and embraced in that moment that aren't present in the story—things that have happened so long ago, that have been happening for years and years—without rehearsal you wouldn't know that you were all in the same world."

What was it like doing the scene where Mary first meets her birth mother?

"It was extremely special to do the scene where they meet for the first time, because it's like meeting the creator and she has to confront these fantasies of love and protection and safety that she had associated with this mother figure that she had also tried to let go in the years leading up to the beginning of the series. Mary has really committed herself to living a life with Puss and to making that the world that she can survive in. When she meets her mother, it's almost like a moment of infidelity because the strength of the romance of the mother figure and the strength of the romance of the lover figure are on par. That was a really interesting thing to explore throughout the series, Mary's infidelities with all the romances of her adopted mother, her real mother, her real lover and the dad. I don't mean in a sexual way, but I think romance is not necessarily a sexual thing."

There are different love stories playing throughout the series. Tell us more about that.

"I think in the series there's a great deal of romance and some of it is in actual sexual relationships while some of them are really friendships, family and it's so rich and deep. I only cross over into the world of Robin Griffin and Miranda Hilmarson briefly, but I've been very aware of that relationship and what that is in the story throughout the process of making it. I was also very aware of Gwendoline and Lizzie (Elisabeth Moss) and their rapport, both onscreen and offscreen. I think that is a beautiful relationship in this story—it's great to see women who are not just strong, but also really complicated, and sometimes weepy and messed up I love their romance, and I love seeing Miranda's (played by Gwendoline)  desires for what she wanted Robin Griffin to be as well and how she wanted Robin to see her.

It's actually quite a different story for Robin and Mary, because they actually do like each other, and they respect each other. Although there's this remarkable tension and feeling of what's at stake and what could go so terribly wrong, it doesn't go terribly wrong. Mary is able to let go of those fantasies because she's actually interested in the real person that is her mother."

Tell us about the experience of the rehearsals and how that helped build the character of Mary.

"Rehearsal was incredible, I really loved it. Jane and Ariel (the other director) were both great in rehearsal, and that feeling that we were all creating the same world made all the cast and myself feel really confident about the things that we were forming, and what we were going to be able to offer. In rehearsal we did a lot of improvisations around the family time and around Mary's adolescence growing up. I have a little pink book, it's my bible. I've written all my little things and if I'm ever at a loss, I can flick through the book. I did a lot of writing about bad things that Julia (her adoptive mother in the show) has done to deserve the cruel treatment she's given."

How would you describe Mary's relationship with her adoptive mother Julia?

"I do want to talk about Mary and Julia, because it's full on. We've been doing these family dinner scenes and it's just war, and all kinds of war, too—there's the boring, still kind that is filled with tension, and then the complete battle, carnage kind. It's so confusing to try and be objective, or have my own point of view about the way Mary behaves in these scenes, because I have to believe everything she says, and she says some terrible stuff, but I just have to be there with her till it's over. I'm not method in any way, but I have to shut my ears if anyone else feels provoked on set by my character's journey." 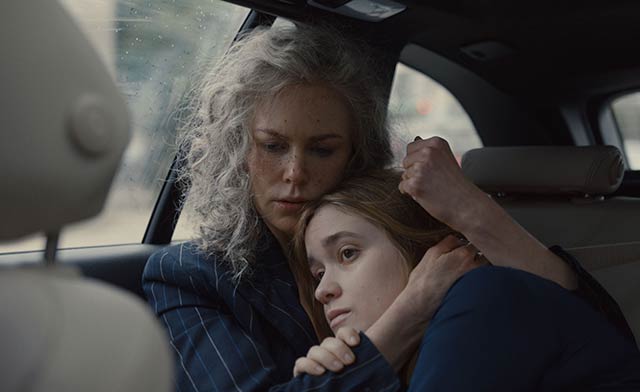 What about Mary's very unusual relationship with Puss?

"I think to Mary, they are a king and a queen, and they're living in a strange and complicated world together. But they're doing it together, and they're going to be ruthlessly honest about their own prejudice and everyone else's prejudice even when it makes them feel uncomfortable, and even when it's painful or seems confusing—or at least that's the philosophy that leads Mary to do some extreme things for Puss.

But I think that the love with them is actually really strong. Puss really does love Mary and I'm glad and proud that that is something that the series wants to portray. It's easy to say, "Oh, look at this inappropriate relationship," but there is a relationship, and there are two whole people in that relationship. If people see that there is love and something really important there, and not just "oh they did this thing", then we have an actual chance of understanding why we do painful things to ourselves."

How is that relationship connected to the crime that takes place?

"The good intentions that they have are integral to the mystery of this story and the crime. The crime is complex. Trying to figure out who the bad guy is in this series, I don't think you'll do it. I don't think anyone will. Because I don't know who it is really either. This series does not tell you who to root for."

How was it for you being a part of the brothel scenes?

"It was an extremely difficult set to work in because it was summer and it was hot and there was no space and I'm sure that we were all a bit smelly at some point because of that. But everyone continued to be charming and real—it was a great and unusual world to be inside of and to learn about actually, I really appreciated that. In a way, that world is so removed from my everyday experience. But for so many people it really isn't."

What was it like working with your mother, Jane, and director Ariel on the series?

"A really comforting thing for an actor is when you have two directors and you can see that they both want to make the same series. I definitely feel that with Jane and Ari, and it's just been a pleasure working with both of them. I love working with my mother and it doesn't feel so strange because I spent a lot of my youth working as an actress, rehearsing with my mum, or wanting her opinion and input, because I think she's fantastic—she's one of the best filmmakers in the world. So it has been easy because on this, I just do what she wants or try to do what she wants. I totally trust her. Meanwhile, Ari has a beautiful way of talking with actors. I find him really easy to understand. He's really sweet and funny and observant. He gives good direction, it's lovely when you can feel that someone's there for you like that."

The entire season of 'Top of the Lake: China Girl' premieres on BBC Player this Friday, 28 July 2017.

2017 Emmy Awards: The nominees are in