Omega's ties with 007 started with GoldenEye in 1995, when James Bond was played by Pierce Brosnan for the first time. It was Lindy Hemming—costume designer for GoldenEye, Tomorrow Never Dies, The World Is Not Enough, Die Another Day and Casino Royale—who proposed that Bond should wear an Omega Seamaster. "I fought for Bond to wear an Omega watch because I wanted a watch that I felt was appropriate for a naval to wear, and the company was known for its diving watches, the Seamaster in particular," says Hemming. 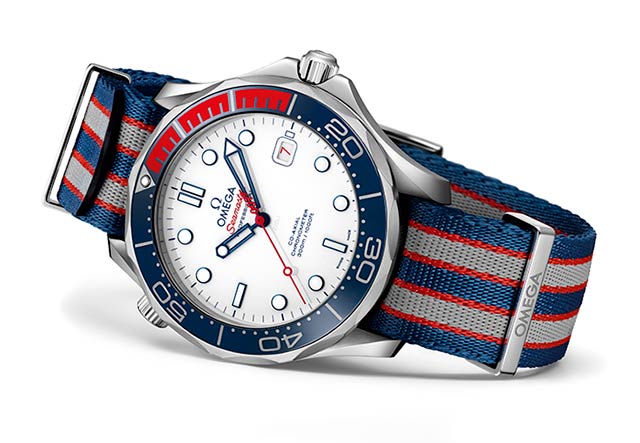 Did you know? The original Seamaster, released in 1957, was used by military divers around the world. During the early days of the Second World War, Omega delivered more than 110,00 watches to Great Britain's Ministry of Defence.

On the design front, the Omega 'Commander's Watch' Limited Edition fittingly wears the British Royal Navy's colours of white, blue and red. It matches the other Seamaster 300m Diver's watches with a 41mm case and Omega Calibre 2507 movement with co-axial escapement, but it gets unique Bond touches with the 007 gun logo counterweight on the central seconds hand, and the three stripes of the Commander's naval insignia along with the iconic logo on the rotor, which is visible through the wave-edged caseback. 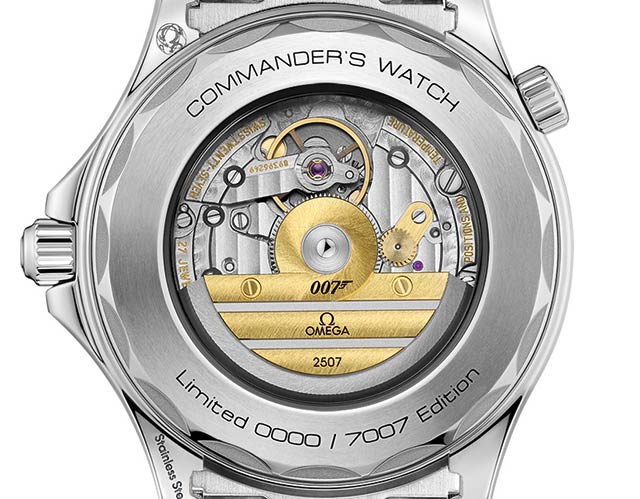 The stainless steel model sees production of only 7,007 pieces, while an exclusive model crafted from 18K yellow gold is limited to just seven. A special auction later in the year will see the two Omega Seamaster Diver 300m 'Commander's Watch' Limited edition timepieces—a stainless steel model with the serial number 007 and a 18K yellow gold model—as well as a one-of-a-kind 18K white gold version being sold, with all proceeds going to selected charities.

Eye Candy: See all 60 years of the Omega Speedmaster

How Omega became the official timekeeper at the Olympics