The all-new BMW 5 Series is here in Malaysia Known as the sportiest and most successful premium business sedan, the BMW 5 Series is one of the brand’s most iconic range. Today, BMW Group Malaysia has introduced its seventh generation featuring more upgrades than before and continuing to deliver that promised Sheer Driving Pleasure. Here’s the lowdown of all you need to know about the new BMW 5 Series:

1. It won the much coveted iF Gold Award 2017, the highest accolade for Design at the recent iF Design Awards 2017.

2. It is also in the running for the famed World Luxury Car of the Year Award 2017. 3. The new BMW 5 Series carries an even more powerful stance with a sexy coupé-like silhouette. For the first time ever, the kidney grille and headlights are directly linked and the crease below the side windows curve upwards into the Hofmeister kink.

4. It’s 100 kilograms lighter than its predecessor thanks to a rigorous application of the BMW Efficient Lightweight design concept and increased uses of aluminium and high-strength steels.

5. There’s more space (and comfort) inside the car for both occupants and things you would want to put in the boot. It boasts a luggage compartment of 530 litres. 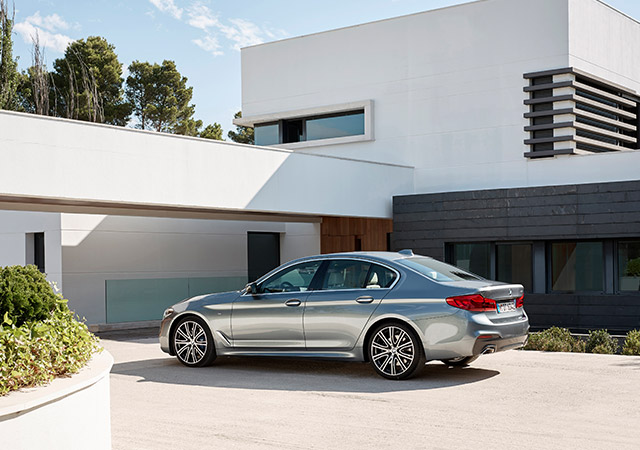 7. The new BMW 530i M Sport comes with the latest-generation inline 4-cylinder 2-litre petrol engine coupled with an equally optimised eight-speed Steptronic Sport transmission. It generates  a maximum output of 252hp, 350 Nm of torque and is able to accelerate from 0-100km/h in just 6.2 seconds at a top speed of 250km/h. 9. The new BMW 5 Series has been fitted with a series of innovative technology and first class equipment. For starters, its intuitive controls have received much praise. The iDrive system can be operated using the iDrive controller by voice command, gestures or display controls via touch.

10. The system has an Active Cruise Control with Stop&Go function that can adjust pre-set speed according to the traffic situation based on radar and camera data. It also recognises roundabouts and motorway exits, and is able to control acceleration accordingly.

11. Its safety functions are top notch. The new BMW 5 Series can warn and brake within a speed range from roughly 10km/h to 60 km/h for approaching people and up to 80km/h for oncoming vehicles. In the event an accident is unavoidable, the city braking function will help reduce the impact speed and thus, the severity of the accident. Besides warning potential collision with a vehicle ahead at higher speeds, it can precondition the brakes for faster brake response and shorter braking distances. The new BMW 530i M Sport’s retails for RM398,800 (on the road, without insurance, and with BMW Group Malaysia’s latest 5 Years Unlimited Mileage Warranty, Free Scheduled Service Program and BMW Tyre Warranty Programme) and is available at all authorised BMW dealerships across the country from this weekend onwards. For more information, visit www.bmw.com.my.

It will also be displayed at Pavilion Kuala Lumpur Main Entrance from 31 March 2017 to 2 April 2017 where visitors can participate in interactive activities and stand a chance to win an exclusive experience with BMW.