How to make Iced Gem Biscuits with a twist for Christmas

If you're a Malaysian who grew up anywhere between the 70s and early 00s, I bet your childhood was filled with iced gem biscuits—alongside haw flakes, Sugus candies, Paddle Pop ice creams, and Bin Bin rice crackers

For the uninitiated, iced gem biscuits might seem wholly unremarkable. After all, they're just made of a basic, cream cracker-esque biscuit base, with a dollop of hardened, artificially-coloured, saccharine icing sugar on top. But man, for us 90s kids, one bite and it'll bring back a flood of childhood memories getting sugar rushes gorging ourselves silly on these snacks.

Back then, iced gem biscuits were most commonly sold in jars or plastic containers at the back of the counter in local tuck shops or convenience stores. Known as biskut ais jem in Malay or 花占饼干 in Chinese, they were my go-to snack at my local haunt—the Kett Star store opposite my primary school in SS19, Subang. It was always busy with Lick Hung students craving for a treat or two after school, with everyone clamouring over the best goodies, not least because the auntie who manned the till was always extra generous with the candies she handed out.

Nowadays, iced gem biscuits are nowhere near as pervasive, being replaced instead by the recent flood of imported snacks like Peppa Pig candies, Pocky sticks, and the admittedly addictive salted egg chips. Still, these newer inventions have not managed to totally stamp out the timeless iced gem biscuits.

Weirdly enough, while we might think of iced gem biscuits as a Malaysian or Singaporean invention, it's actually a snack first created in England in the early 2000s. According to the Straits Time, the biscuit bottoms were first made by Huntley and Palmer in Reading, Britain in the 1850s. The iconic icing came later in the 1910s. Since then, thanks to colonialism, and later capitalism, this British snack infiltrated the Malaysian food scene and quickly established itself as a firm favourite among Malaysian kids.

Despite its English origins, there is one key difference between the iced gem biscuits found in the UK and those we have here in Malaysia. Instead of the airy, crunchy cracker base we know and love, most British recipes for iced gems call for a buttery biscuit base that is reminiscent more of British shortbread than a Hup Seng cream cracker.

Curious as to the taste of the buttery, biscuity version, the pastry fiend in me had to try it out. So try it out I did, and I have to say, I am pleasantly surprised! It combines the best part of an iced gem—the icing—with the rich, crumbly goodness of a shortbread biscuit. Sure, some might say it doesn't quite have that original sense of nostalgia, but in terms of flavour, this builds on the iced gem biscuits we grew up with, turning it into something that us Malaysians, even now as adults, would eat and enjoy, and not just because of that bit of childhood nostalgia.

Also, since Christmas is nearly upon us, I thought it apt to make the icing in shades of red and green, combining the nostalgic Malaysian iced gem with the colours and comfort of Christmas! (Don't worry, the colouring is all-natural; I made them from beetroot and pandan, which adds to their Malaysian-ness, in a sense!)

So make these iced gem biscuits for Christmas this year and relive your childhood sugar rushes! 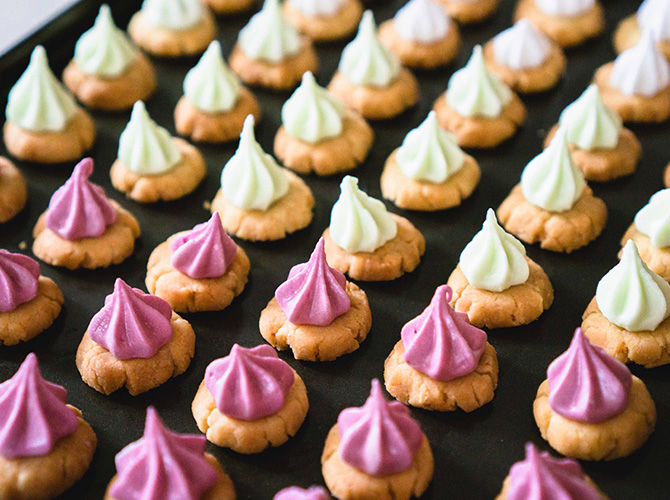 Royal icing (I made them in three different colours but you can do more if you like!) 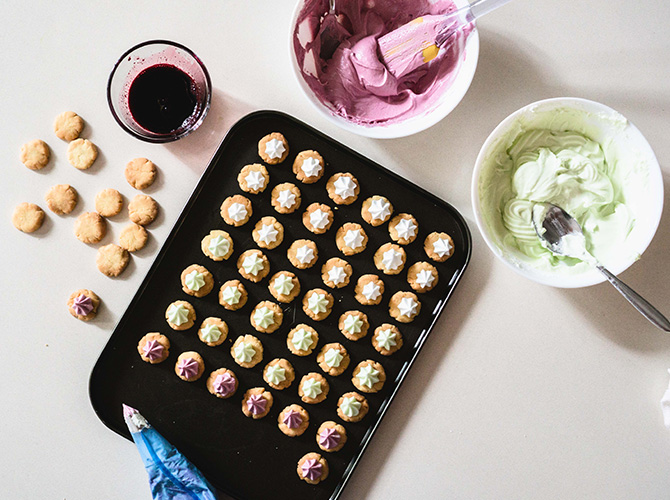 Recreating the burnt cheesecake ala The Tokyo Restaurant

How to make this delicious chocolate mousse with only two ingredients