In the UK, there’s the royal wedding; in Malaysia, we have #chrysfaliqeverafter; and in Italy, there’s #TheFerragnez. Voted the most powerful fashion influencer in the world by Forbes last year, Chiara Ferragni launched her career as a fashion blogger under the name The Blonde Salad in 2009, and she is one of the few who has successfully launched her own fashion line, the Chiara Ferragni Collection. Fedez, on the other hand, is one of Italy’s most popular rappers at the moment.

With a combined number of 20.4 million followers on their Instagram accounts, the stars have been making waves throughout the course of their relationship, but the highlight of them all is definitely the sweet public proposal, where Fedez asked for Chiara’s hand in marriage at his concert in Verona, Italy. Less than five months after welcoming the birth of their adorable son, Leone, on September 1, the couple got married on the island of Sicily, and it’s been dubbed “the Italian royal wedding”.

Here, everything we know about the nuptials:

1.     Although Chiara Ferragni celebrated her bachelorette in Ibiza, the couple opted for somewhere closer to home for the wedding, tying the knot in Noto, Southeastern of Sicily. The palace of choice?  Palazzo Ducezio, a grand 18th-century building used for the town hall.

2.     To fly the guests to the destination, the flag carrier of Italy, Alitalia sponsored a plane for the wedding, complete with a Chiara mascot, custom air tickets, and personalised snacks.

3.     Previously revealing Dior’s Maria Grazia Chiuri will be designing her haute couture gown, Chiara Ferragni walked down the aisle in a dress that features a lace bodice with long sleeves and high neck, complete with a full tulle skirt. She changed into a second Dior gown for the reception, and this time, it’s a fit-and-flare dress which was covered with lyrics from “Favorisca i Sentimenti” which was written by Fedez for her, and symbols that represent their relationship. 4.     Her six bridesmaids—including sisters Valentina and Francesca—wore custom Alberta Ferretti gowns that were made with sustainable fabrics. The pink silk georgette pleated gowns had lace inlays, and were made in deep V and sweetheart necklines.

5.     The dinner venues were worth a mention too. The rehearsal dinner on the first night at Palazzo Nicolaci di Villadorata had a crystal-trimmed DJ booth. The DJ of the night? Benny Benassi. If guests would like a photo op, they can head to a special room filled with thousands of red roses, and pose in front of a neon “amore” sign. At the reception venue on Saturday night, the oh-so-magical dinner venue was covered with sparkles, flowers and mosses. And at the end of the reception, The Circle of Life from The Lion King played as fireworks lit up the night sky. 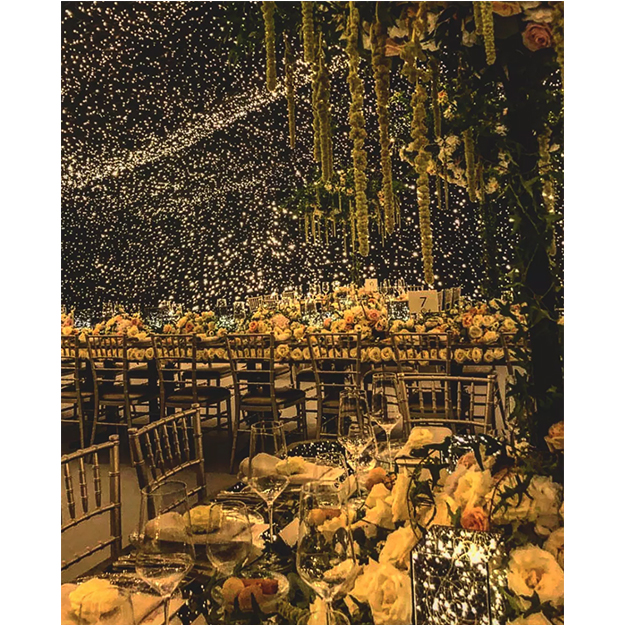 6.     The pop-up wedding invitations hinted at a Coachella-themed after-party, but the real deal was more fun than expected. Called The Ferragnez Luna Park, the funfair boasted a merry-go-round, Ferris wheel, claw machines (with Fedez and Chiara soft toys) and more. Guests were also treated to a special performance by Fedez and Italian singer-songwriter Giusy Ferreri.