A shiny golden sun with metallic rays that extend the entire length of the townhouse on Place Vendôme in Paris decorates Louis Vuitton's new Maison. Situated on the corner of Place Vendôme and Rue Saint-Honoré, the already much-photographed structure aptly marks the new beginning for Louis Vuitton, as they return to Place Vendôme, the very same place where a young Louis Vuitton opened his first store in 1854. 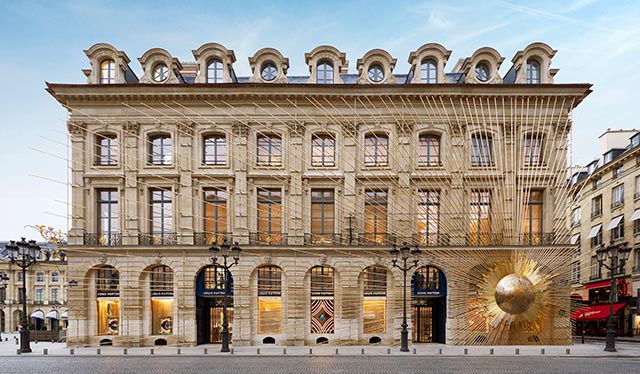 Sprawled across two 18th-century hôtel particuliers, or classic Parisian townhouses, the newly designed and carefully re-instated flagship store by architect Peter Marino, is home to both men's and women's universes, alongside watches and jewellery, fragrances, travel books and City Guides, and the Louis Vuitton Objet Nomades, the home collection designed in collaboration with designers like the Campana Brothers, and Marcel Wanders.

Originally the location of two hotels, Hôtel Beaudet de Morlet, and Hôtel Heuzé de Vologer that were both completed in 1714, the structure and façade have been returned to their 18th-century grandeur—the first level where the women's clothes and shoes are showcased has a ceiling height of nearly five metres, while the façade, designed by Jules-Hardouin Mansart, architect of the Palace of Versailles, has been restored to its former glory. 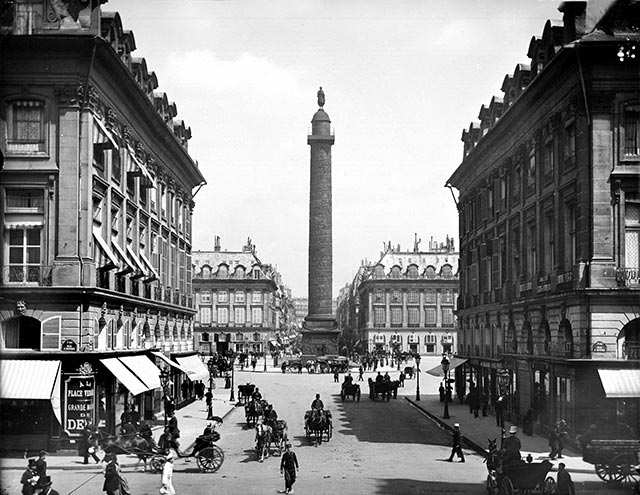 Open and airy, there's an extensive use of glass and light-coloured stone throughout the store that artfully blends history and ultra-modern design. Over 30 pieces of contemporary artwork are found on every floor, some specially commissioned, by artists including Stephen Sprouse, Laurent Grasso, Annie Morris, and Yan Pei Ming.

The Maison also houses two working ateliers—an haute joaillerie, or high jewellery, atelier, and the Atelier Rare and Exceptionnel, where VIP clients and celebrities will be able to view the latest collections and have their outfits fitted and customised, or have exclusive red carpet-ready gowns made for them by the atelier's in-house artisans.

No doubt some of these lucky celebrities were in attendance at the opening of the Maison Louis Vuitton Vendôme on Tuesday night. The star-studded event saw Louis Vuitton campaign faces Alicia Vikander, Michelle Williams, and Lea Seydoux in attendance, alongside Nicolas Ghesquière, Cate Blanchett, Julianne Moore, Fan Bing Bing, Rila Fukushima, Marion Caunter, and Will and Jaden Smith. 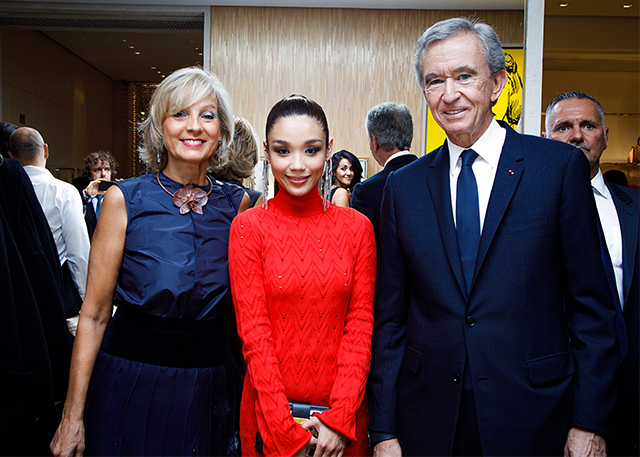 The latter two later performed at the afterparty, with Jaden Smith opening for his dad. Guests took to the packed dancefloor and danced the night away to hits like Gettin' Jiggy Wit It, Switch, Miami, and Just the Two of Us, with DJ Jazzy Jeff keeping the music amped up till the wee hours of morning. There's nothing like a good fashion week party, and Louis Vuitton sure knows how to throw a great one.

Red carpet arrivals at the opening of the Maison Louis Vuitton Vendome:

LVMH is opening a $70million theme park in Paris