At Loewe AW17, Jonathan Anderson toyed with the idea of a flower growing in a dark box—the perseverance and struggle to survive. This translated into a much smaller show space (to last season), plunged in darkness—so much so that guests could hardly see each other, let alone find their seats without the help of light from their phones. Wilting orchids were placed in a seemingly random fashion around the show space—the only items that had a dim light shining on them. If a weakness or struggle produces something all the more impressive then Jonathan Anderson certainly achieved that at Loewe this season. Romantic dresses with billowing skirts, one particularly beautiful with puff sleeves, were shown along side Fair Isle knit sweaters, bold-shouldered coats in half wool-half leather, and full skirts cut from leather—one particularly standout look matched with a mustard brown leather shirt with a nipped-in waist. While bats and clouds were last season's key motifs, this season saw Anderson placing loaves of Loewe bread on floppy hats, and tote bags—when in times of darkness, let Loewe be your daily bread. 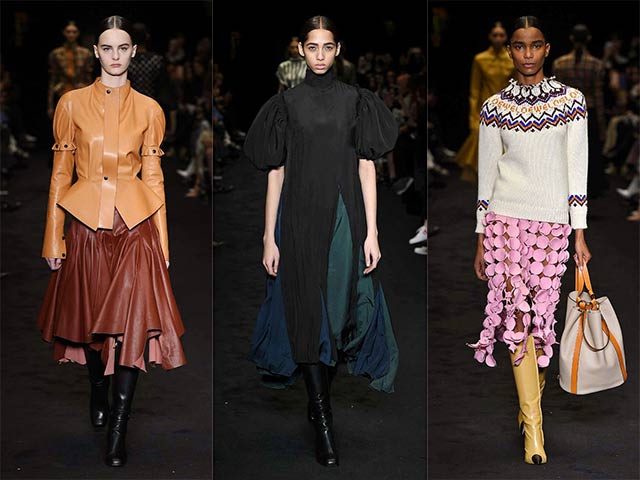 Where Loewe was bursting with elements, Maria Grazia Chiuri's show at Christian Dior was united by the black leather berets that accompanied every look—even the evening ones—and the colour blue.

"Among all the colours, navy blue is the only one which can ever compete with black, it has all the same qualities."

Those are the words of Christian Dior, written in The Little Dictionary of Fashion. Seeing that this year marks the maison's 70th anniversary, Chiuri staged a beautiful ode to the past, present and future. Not that the show followed a timeline, instead it seemed to interweave notions of then and now. Hues of blue came through in ensembles of utilitarian nuances, skirt suits and ethereal evening gowns. Denim—not a textile usually associated with Dior—had its fair run on the runway too, cut in wide jeans and bib overalls worn under a tailored jacket; a casual day look with a Dior sophistication. In the eveningwear front, Chiuri's signature tulle evening gowns are as pretty as ever, presented alongside a number of plush velvet renditions. 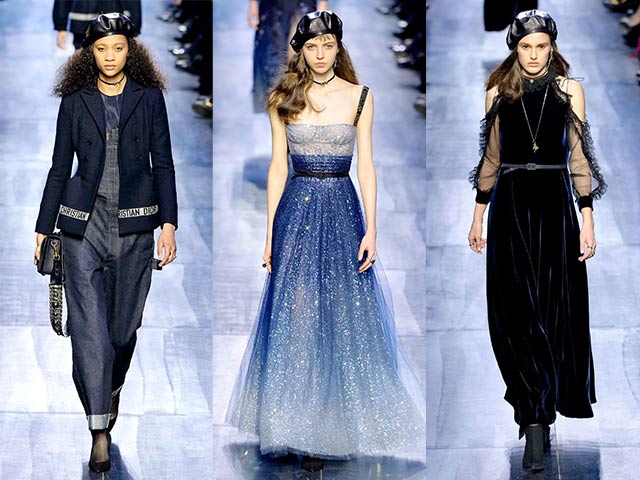