Tonal dressing at its finest was showcased at Max Mara, where Max Griffiths conjured all-monochromatic outfits with a play in texture. The palette was classic and bold: strong looks in red opened the show, followed by shades of brown, grey, gold and camel, before closing out with black. While we can't say if the tropical prints from his SS17 show will still be in season when next spring rolls around, his AW17 collection tells a different story with creations that look utterly timeless—coats are Max Mara's undeniable forte, after all, and the likes of tailored skirts, trousers and pant suits will hardly wear out. 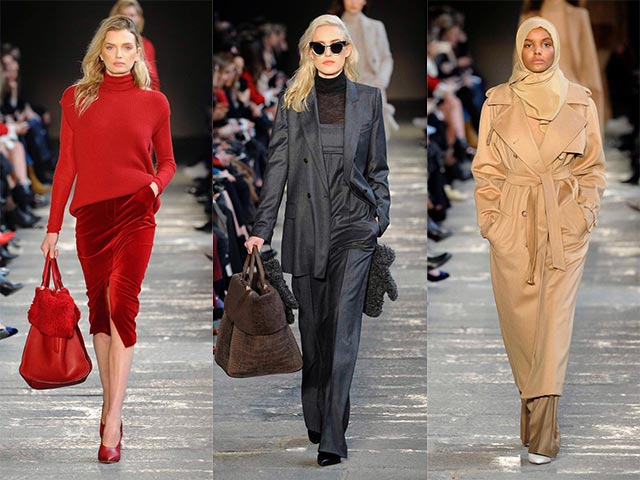 Another show that echoed the sentiment of being timeless is Fendi. After a frolic through the gardens of Versailles last spring comes a grown-up outing this fall, where a theme did not come screaming through, but Karl Lagerfeld and Silvia Venturini Fendi's Roman inspiration was as subtle as can be. For example, the opening look of a double-breasted coat with deep mink cuffs worn over a longer skirt is a nod to the "stratification" of Roman architecture. Elsewhere, the geometric prints and patterns that were brilliantly incorporated onto intarsia coats and knitwear, at times with a cut-out design, were inspired by Viennese woodblock printing and 18th century Italian papiers dominotés. 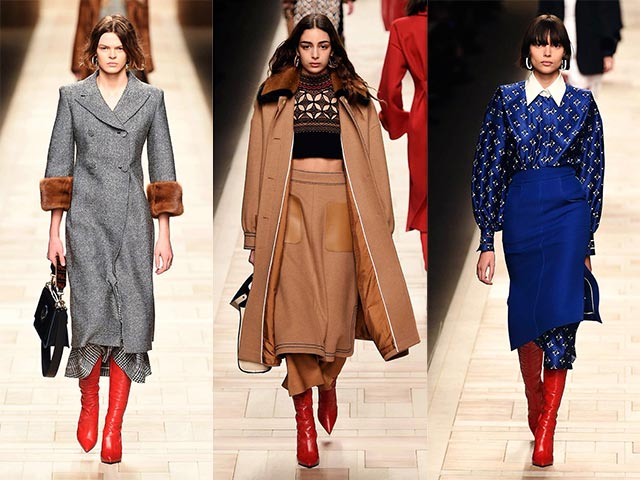 Near the mouth of the Prada runway, a poster-form declaration read: "Continuous Interior, Prada 2017. We have decided to look at the role women had in the shaping of modern society, their political participation and social achievements." Perhaps that explains the hint of rebellion in the collection; the glamorous, statement elements that adorned everyday staples: feather in bright hues fluffing up the hemlines of skirts and coats, a series of co-ords and shift dresses featuring prints from paperback novels of the '60s, as well as unlikely patterns and colours put together to complete head-turning looks. 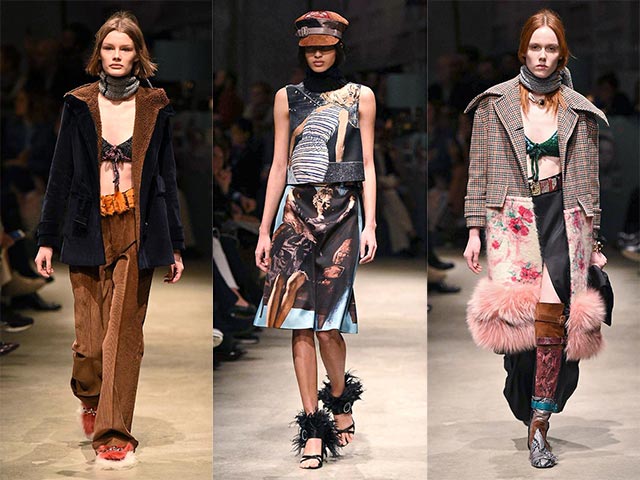 There is rarely a dull moment (or theme) at Moschino, and this season sees Jeremy Scott go about the idea of making do: what will a rich clotheshorse who's gone dead broke wear? The show opened with cardboard couture looks—Kendall Jenner kicked things off in a skirt suit that looked to be taped together, and her good friends Gigi and Bella Hadid followed in coats covered with 'fragile' and 'handle with care' labels. Then came ensembles clad in collage prints of old Moschino editorials, before the show closed on a high with party dresses and gowns fashioned from mundane household items, think bathroom curtains, bubble wraps, shopping bags, duct tapes, as well as, well, trash. To drive the message home, Scott took his bow in a tee that read "Couture is an attitude, it's not a price point". 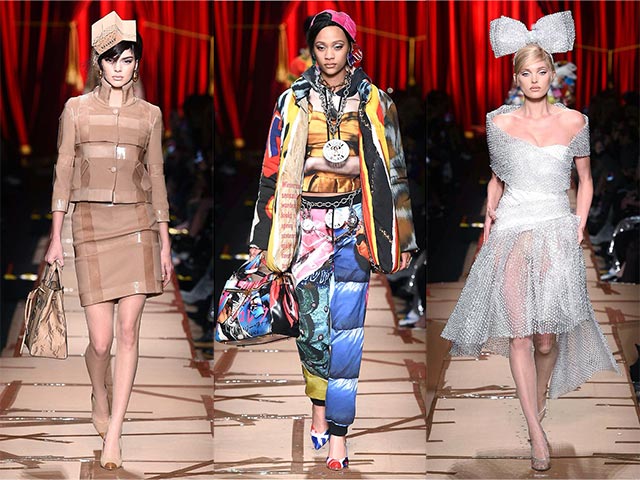