07.06.19
One thing these brands had in common? Presenting their Cruise 2020 collections in art museums.

And we're back with our second round-up of the latest Cruise 2020 shows. Missed the first? Click here. 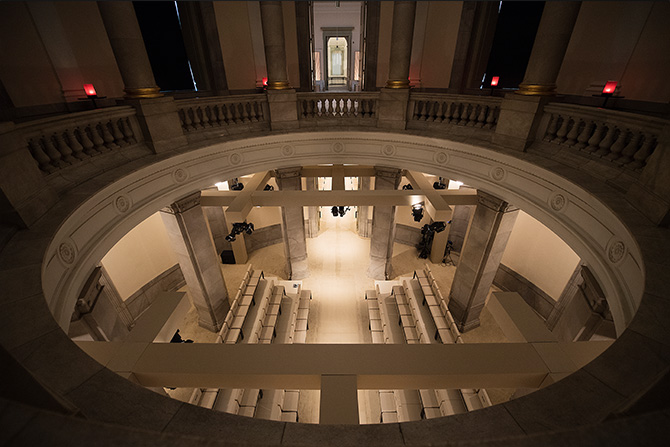 Where: Giorgio Armani took to the oriental island of Japan for the brand's first runway show for a cruise collection. Held at the Tokyo National Museum built in 1872, it is the largest and oldest museum in Japan's capital.

The low-down: It appears that Giorgio Armani took to another faraway Eastern culture for Cruise 2020's inspiration. The boxy, peakless hats resemble the ‘fez', a cultural headdress commonly found in Morocco and its neighbouring Mediterranean cities. Earth tones, burnt neutrals and cool grays were the key colour palette, translated on breezy tunics, flyaway capes and shawls. Accompanied by its sharply tailored suits, we can easily imagine the collection to a scene in Casablanca, with Humphrey Bogart and Ingrid Bergman clad in Giorgio Armani's timeless wares.

Where: It's known that Creative Director Alessandro Michele is deeply fascinated with the old world and its historical significance on today's present culture. Michele introduced Gucci's Cruise 2020 collection at the Capitoline Museums, located in the heart of his hometown, Rome. It is easily defined as the oldest museum complex in the world and offers a unique look inside Ancient Rome through its antiquities collection.

The low-down: It was an eclectic mix of fashion though the decades and centuries, tied together with Gucci's colourful eccentricity. The plain toga worn by the citizens of Ancient Rome was rehashed in soft blush, the cobalt blue fitted sequin cloche paid homage to the 1920s popular headgear, while the large, heavy (faux) fur coats rung true to the past age of decadence. Back to present times, in the height of the talks about the abortion ban in Alabama, Michele spoke out about the issue through the image of a female reproductive system embroidered on a pleated maxi dress and the slogan, ‘My Body, My Choice' emblazoned on the back of a bright purple blazer. "It's unbelievable that around the world there are still people who believe that they can control a woman's body [and] a woman's choice. I will always stand behind the freedom of being", he tells WWD.

Where: Creative Director Ian Griffiths set the stage at The Neues Museum built in 1855 in the city of Berlin. The museum was closed at the beginning of World War II in 1939, and was heavily damaged during the bombing of Berlin.

The low-down: Griffiths was largely inspired by the strong personas of David Bowie and Marlene Dietrich. Considering the show was set in Dietrich's birthplace and the strong suited looks that were sent down the runway, it's safe to say that the Hollywood legend's influence was dominant as her character. The core muse of the collection was famously known for her unconventional dressing in the 1930s, pushing boundaries in mens suits and hats during a time where it was still considered a taboo. Griffiths channeled her spirit with a softer take on her signature mannish silhouette with broad-shouldered jackets and cinched waists in a soft, neutral palette that will stand the test of time, just like Dietrich's confident swagger.


Who: Get ready for the rise of the eastern-based influencers. Spotted at the show were Lapassalan Jiravechsoontornkul, Yilin Hong, Tina Leung and slow fashion believer, Leaf Greener.


Where: For its first show out of Paris, the French womenswear brand presented their Cruise 2020 on the rooftop of the Long Museum in Shanghai, a private art museum founded in 2012.

The low-down: Creative Director Natacha Ramsay-Levi incorporated the host city's rich cultural history with traditional prints that were reminscent of old Chinese tapestries. Painterly sceneries were depicted on pyjama coordinates while the intricate floral prints that lined delicate sheer separates bore a strong resemblance to fine Chinese porcelain. Known for its Parisian nonchalant coolness, Ramsay-Levi incorporated this ethos in casual layering: see-through skirts worn over short shorts, striped-button down shirts and trousers. Our favourite piece? The modern take on the traditional qipao with the side buttons and Mandarin collar in a refreshing hue.

Everything you need to know about Polycystic Ovarian Syndrome (PCOS)

Meet MYJN, the homegrown demi-fine jewellery brand that stands out with its minimalist design