The exclusive Pirelli Calendar is traditionally known for its celebration of female beauty, typically with provocative, sexually charged images, since its first edition in 1964. But recently, the calendar has shifted gears and redefined itself, becoming a platform for social commentary. It started with the 2016 edition, where photographer Annie Leibovitz opted for accomplished women in diverse fields (mostly clothed) instead of models. Then for the 2017 calendar, Peter Lindbergh photographed more notable women, including the likes of Nicole Kidman, Dame Helen Mirren and Zhang Ziyi, and published the images—completely unretouched.

This year, photographer Tim Walker and British Vogue editor Edward Enninful team up for the 45th edition, reimagining Lewis Carroll's Alice's Adventures in Wonderland with a star-studded, all-black cast that includes the likes of Naomi Campbell, Whoopi Goldberg, RuPaul, Lupita Nyong'o and Sean "Diddy" Combs. This marks the first time Pirelli featured an all-black cast in the calendar since 1987—a then teen Campbell starred in that edition as well. This year, Campbell takes the role of The Royal Beheader in Walker's version of Wonderland. 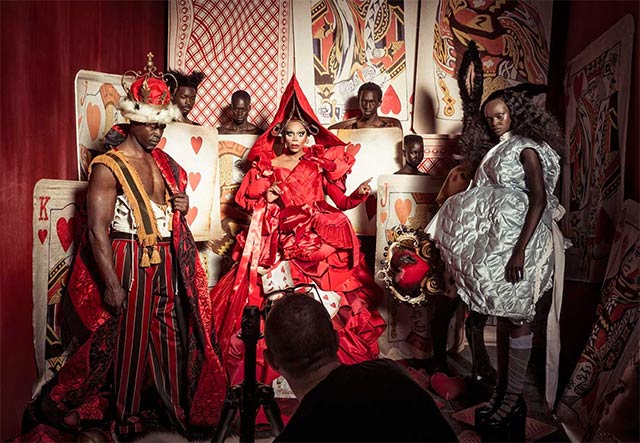 "Inclusivity is more part of the conversation than it has even been before, but it goes far beyond black and white," Enninful tells The New York Times. "It is about all creeds, all colours, all sizes and people just living their truths. Given the state of the world we live in, sometimes I think we all feel like we've fallen down the rabbit hole. For me, a retelling of 'Alice' for the modern world was a perfect project, particularly once the cast fell into place."

See the full cast list and BTS video of the 2018 Pirelli Calendar shoot below:

Stars go naked while fully dressed for the 2017 Pirelli Calendar