Having been with Van Cleef & Arpels since the year 2000, Catherine Cariou shares her thoughts on the maison’s iconic Alhambra collection that just celebrated its fiftieth birthday

We're in sunny Marrakech, Morocco, to celebrate the 50th anniversary of Van Cleef & Arpels's Alhambra collection. The maison has taken over Dar Moulay Ali, the residence of the Consul General of France, and transformed it into part workshop, with artisans showing off the many different steps involved in creating the Alhambra, and part fancy lunch soirée, complete with food by Michelin-starred chef Yannick Alléno, and a photobooth with multiple racks heaving with the most amazing vintage clothing from Chloé to YSL. Catherine and I were lounging on the sofa in the gorgeous living room to talk jewels, good luck charms, and 50 years of Alhambra.

Cai Mei: The Alhambra is celebrating its 50th anniversary this year. The four leaf clover motif is iconic to the house. Can you please tell us how this came about?

Catherine: Van Cleef & Arpels was founded in 1906, and we started to create clover designs at the end of the 1910s. We recently discovered these designs and it's exciting—I've been working at Van Cleef & Arpels for 18 years now and we are still discovering new things in our archives. Just two years ago, we accidentally found books describing jewels that were made at the very beginning of the founding of the maison, a bracelet called 'Clover' that was made from platinum with rubies. So we know that we've created jewellery with the clover theme right from the start.

Was that Clover bracelet similar in design to the Alhambra?

Unfortunately there was no design, only the description of the jewellery piece so we don't know what it looks like, but that was the earliest records of the house having a 'clover' design. We regularly create jewellery inspired by clovers, and of course the epitome of the clover design is found in the Alhambra, created in 1968. The very first Alhambra necklace was created in gold with golden beads around the edges of each clover. In that same year, we also launched versions in lapis lazuli and carnelian.

How would you describe that creased gold texture of the first Alhambra?

It's what we call textural or granulated. At the end of the Sixties, man took the first steps on the moon and there were a lot of jewels that took inspiration from the moon. The origin of this granulated texture is from that momentous event; it's inspired by the craters of the moon. Within the maison's heritage collection, there's a pendant named 'Moon' from 1968. It's irregular surface replicates the craters of the moon.

How are the different precious materials that go into the making of the Alhambra picked?

The materials are selected by our gemologists. They choose the best quality and the best colours in order to set the stones. In the 1970s, we used a lot of ornamental stones, hard stones, and organic materials, such as wood, carnelian, turquoise, ivory, tortoiseshell, and malachite. The Seventies was all about hippie chic, flower power, and the ladies who wore the Alhambra jewellery mixed and matched all different colours and materials. For example, Princess Grace Kelly had a lot of Alhambras; she had them in yellow gold, in tortoiseshell, in coral, in malachite and she mixed and matched everything. Prince Albert II told us that when he was very young, he often played with his mother's sautoirs.

What are your favourite materials for the Alhambra?

I love the lapis lazuli with yellow gold. In the Seventies, ladies started to get tanned. It was very trendy at that time. I think all the browns that we have like the tiger's eye, wood, tortoiseshell or even onyx matches very well with tanned skin. It was very chic, very elegant. Ivory is also beautiful on tanned skin.

What do you think makes the Alhambra so popular?

When you look at the Alhambra, what I find interesting is that its design matches very well with abstract, Indian, or Oriental designs—the Alhambra goes with everything. That's probably the reason for the success of the Alhambra—it's timeless, and beyond fashion. And that's also the reason why it's so difficult for me to find vintage, or second-hand Alhambras on the market. One of my responsibilities is to source for objects to enrich our museum but it's difficult to find Alhambras from the '70s and '80s. It's probably because it's the symbol of our luck—daughters inherit Alhambra pieces from their mothers or grandmothers so there's an emotional connection.

And what makes the Alhambra unique?

Our clients have been very creative in the way they wear their jewellery in the Seventies, which reflected the mood then; it was all about originality and innovation. Innovation in the way they wore their jewellery, in the way they combined the different colours of the Alhambra. In 1954, we came up with the concept of La Boutique. The La Boutique range of jewellery were more accessible and included a range of animals, flowers, Alhambra, jewels that were more affordable than the Van Cleef & Arpels high jewellery pieces. The idea was so that the same lady could buy, say, a lapis lazuli sautoir, and then six months or a year later, come back to buy another sautoir in tortoiseshell Alhambra, in order to mix and match the colours. My mother used to link two sautoirs together and wore them as a belt, or to make several rows of chains around her neck, or wore them as multiple bracelets.

Now, 50 years later, how are women wearing the Alhambra differently?

Women these days have a lot more product offering. In the Seventies, they only had the sautoir. In the Eighties, we added the ring, and ear clips, but today there are a lot of different choices.

Who is the Alhambra woman?

In the Seventies, definitely Princess Grace of Monaco. She wore the Alhambra perfectly. She's gorgeous and elegant. 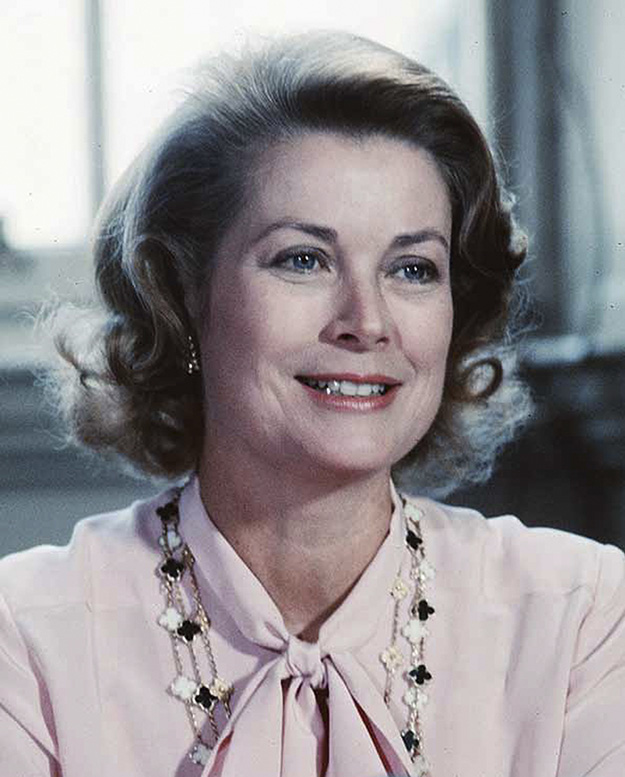 What material would you like to see the Alhambra made of?

Amethyst. We've never created an Alhambra with amethyst before, and violet was a colour that was very trendy in the Seventies so why not amethyst.

What are your personal luck signifiers?

I don't have a lucky charm or a porte-bonheur per se. A lucky charm doesn't necessarily need to have a lucky motif, it could be something you've inherited, something emotional, something that symbolises love. One thing that's dear to me would be a pendant given to me by my mum that's inspired by an African sculpture. It's from Van Cleef & Arpels from 1971, made of ivory and yellow gold. In my small private collection, I've also inherited the Winking Cat brooch. It's part of the La Boutique collection created in the Fifties. We created lots of small animals and each animal had a character. My mother had a few different animals and since my parents always told me I'm mischievious, I inherited the Chat Malicieux, or the Winking Cat brooch.

Buro’s City Guide to Marrakesh: Where to stay, eat, and go