COVID-19 virus in Malaysia: A timeline of events from the start

Head to "COVID-19 virus in Malaysia: Here's everything you need to know-updated daily" for the latest updates, stats and numbers

The following updates first appeared in "COVID-19 virus in Malaysia: Here's everything you need to know-updated daily" and have been moved here for the purpose of a historical timeline.

The number of cases in Malaysia by states, Mar 21. @DrAdhamBaba pic.twitter.com/svOr4O8874

15 government and private healthcare workers have been infected by COVID-19, with one on ventilatory support in ICU. The Health Ministry is continuing to urge Malaysians to play their part in reducing the number of cases so as to not overburden the healthcare system. pic.twitter.com/qRNdZFimvm

The Yang Di-Pertuan Agong took a drive around Kuala Lumpur today, to check on the implementation of the Movement Control Order.

“There are still a number of vehicles on the roads, but I hope this will reduce soon for the benefit of all Malaysians”

The Prime Minister of Malaysia, Tan Sri Muhyiddin Yassin, has announced the following in his latest press conference on how Malaysia will be handling the COVID-19 crisis:

Stay calm. Stay safe. We wish you all a beatiful morning!

Latest: A new case positive for #COVID19 in Malaysia.

The 23rd case involves a local woman who had traveled to Japan recently.

Meanwhile two other patients - cases 16 and 22 have recovered and been discharged.

This brings the total number of cases so far to 23. pic.twitter.com/ujA01NFbX6

Two (2) patients have been cured and discharged from Hosp on 18th Feb. Both of them are Malaysians’ evacuees from Wuhan (Case no. 11 and no. 12) and was tested positive of COVID-19 on 5th February 2020.

Overall total number of cases who have been cured and discharged - 11 cases pic.twitter.com/IsaBv1hPdv

The Wuhan coronavirus is relentlessly spreading on a global scale as numbers of the infected and fatalities continue to rise. To the point that the World Health Organization has admitted its error in assessing the risks of the deadly virus, going as far as to calling the risks "very high in China, high at the regional level and high at the global level." But still it's not yet an international health emergency. Here's what you need to know instead:

In outbreaks of other #coronaviruses (MERS & SARS), person-to-person transmission occurred through droplets, contact and fomites, suggesting that the transmission mode of the 2019-nCoV can be similar

Germs away! We are doing everything we can to maintain hygiene at our airport by sanitising the handrails of escalators and trolleys. The safety of our passengers and #MYairportscommunity is always our topmost priority. pic.twitter.com/5MJKnIktK6

It's official: The Wuhan virus is now in Malaysia. Three people from the group that was suspected and reported on January 24 have been confirmed to have contracted the virus due to close contact with the man in Singapore. BFM News reported that all three are PRC nationals, currently warded at the Sungai Buloh Hospital and are in stable condition.

Meanwhile, MalaysiaKini wrote that the Health Ministry is considering "the need to restrict the arrivals of Chinese nationals into the country to minimise the spread of the new coronavirus in Malaysia."

While two out of the three cases in Johor are aged 2 and 11 years old, respectively; most of the victims who passed away from the virus was over 60 and had pre-existing health issues, as summarised by The Star. The tricky part is that not all patients or victims actually developed a fever, which makes detecting possible cases even more difficult with just thermal scanners.

“A major concern is the range of severity of symptoms this virus is causing,” said Dr Jeremy Farrar, Director of the Wellcome Trust.

“It is clear some people are being affected and are infectious while experiencing only very mild symptoms or possibly without experiencing symptoms at all,” he said.

Regardless, take care and practise good hygiene, everyone! We'll continue to update this story as it develops.

Just in: According to The Star, eight people in Johor are suspected to have contracted the Wuhan virus. They're currently being isolated and monitored by health officers for symptoms related to it. Deputy Health Minister Dr Lee Boon Chye said the eight people entered Malaysia from Singapore and had contact with the 66-year-old man (a Chinese national from Wuhan) in Singapore who was confirmed to have the virus.

"They are not patients," he told the reporters. "So far, there are no symptoms but they will be monitored for a week."

2020 is not off to a great start. From the devastating Australian bushfires to the crazy floods in Jakarta to the trending topic of WWIII (due to the death of Iran's top military commander by American drones)... and now, #WuFlu.

A quick recap: Wuhan, a city of 11 million people, recently had a coronavirus outbreak which has since spread across China. Wuhan was closed off but due to rising numbers, Chinese authorities have since expanded travel restrictions to a few other cities near Wuhan. To date, China has confirmed 830 cases of infected patients and a death toll of 25 people. 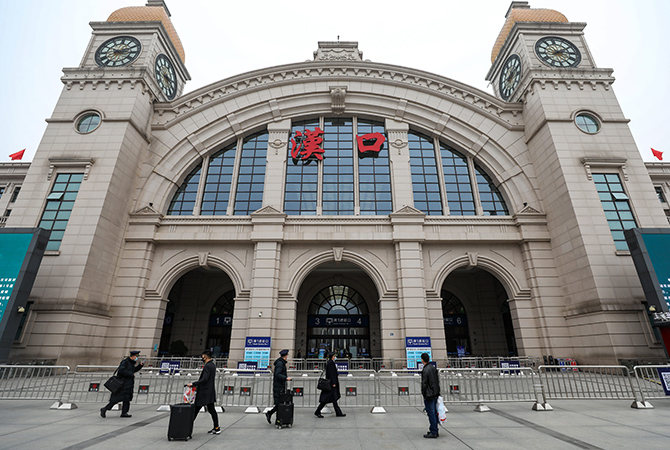 On January 23, it was reported that Malaysia has received four patients suspected to have contracted the Wuhan coronavirus (code name 2019-nCoV). By night, it was confirmed that the test results for the four patients have come back negative. On the same day, Singapore confirmed its first case of the Wuhan virus.

But it's always better to be prepared and well-equipped, and that includes knowledge of the coronavirus, precautions and its global status.

What is the coronavirus?

Remember SARS (severe acute respiratory syndrome) back in 2002 to 2003 when it caused more than 700 deaths in 37 countries? Yes, it's very similar. According to the World Health Organization (WHO), coronaviruses (CoV) are:

Q: What is a #coronavirus?

So is it from bats?

The original source for both SARS and MERS (Middle East respiratory syndrome coronavirus) is the bat, with the middle host being either a masked palm civet or camels. But more recent reports have suggested that the Wuhan coronavirus could have come from snakes as the intermediate host. Snakes hunt for bats, after all; and since the Wuhan Huanan Wholesale Seafood Market, where the outbreak is believed to have started, did sell snakes, it's a high possibility.

This is a great, and costly, reminder that people should not be consuming wild animals.

Is Malaysia prepared if the Wuhan virus hits the country?

According to Datuk Dr Noor Hisham Abdullah, Director General of Health at the Ministry of Health Malaysia, a medical procedure for the virus for reference purposes has been issued and they'll be working with relevant agencies to strengthen screening activities at all checkpoints into the country. 26 government hospitals across the country have been identified to handle suspected 2019-nCov cases.

Deputy Health Minister Dr Lee Boon Chye also told New Straits Times that, "They include all the state hospitals and major specialist hospitals with an infectious disease unit. Every state will have at least one hospital that can provide isolation and treatment to patients."

The Health Ministry has confirmed that 4 people suspected of the coronavirus in Selangor and Sabah, have tested negative for the virus.

Meanwhile, Wisma Putra is advising Malaysians to defer all non-essential travel to Wuhan in China, and other areas affected by the virus pic.twitter.com/Nbk4YnPzG5

"There are a few requirements (to handle such cases). First, the patients need to be isolated. Second, the healthcare providers should have adequate protection with special protective gear to keep them from being infected.

"And, finally, the facilities should have the capacity to perform contact tracing and monitoring," he said.

#Breaking Huangshi, another city in Hubei Province, will halt ferry and bus operations near the Yangtze river bridge and stop passenger traffic, from 10am Friday.

It joins 5 other Chinese cities placed in a lock down, namely Huanggang, Xiantao, Chibi, Lichuan and Ezhou pic.twitter.com/CrO9Ako1ZC

What are the precautions people can take against the Wuhan virus?

Maintain good personal hygiene, which means washing hands frequently with soap and using hand sanitiser. Wear a mask or cover your mouth and nose when coughing and sneezing. Cook meat thoroughly and limit contact with live animals. Yes, it's as basic as that, for now.

What are the symptoms?

Fever, difficulty breathing and coughing. In more severe cases, it can cause pneumonia, severe acute respiratory syndrome, kidney failure and even death.

Stay healthy while travelling!
Avoid travelling if you have a fever and cough.
If you have a fever, cough & difficulty breathing, seek medical care early and share previous #travel history with your health care provider#coronavirus pic.twitter.com/a1pDnElATV

Is there a vaccine?

Not at this point, unfortunately. But three research teams are working on it and are aiming to have a shot developed and approved within a year, according to Channel News Asia.

Which countries have reported cases of the Wuhan virus? 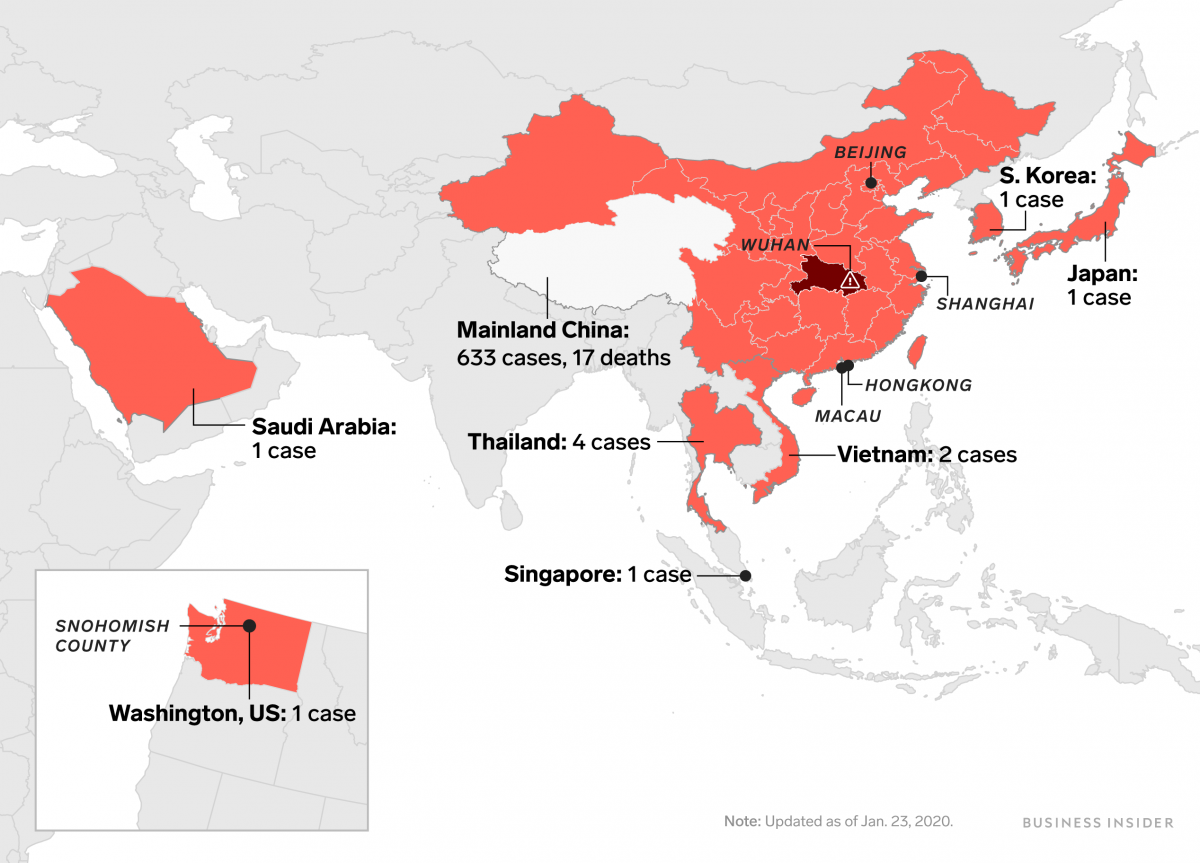 But it's still not considered a "global emergency"

An emergency committee set up by the WHO has decided that the Wuhan virus is not yet a global health emergency but will meet again to discuss within ten days. Dr. Tedros Adhanom Ghebreyesus, the WHO's director general, however, acknowledged that it is an emergency in China but not yet a global one.

More updates to come. Meanwhile, the World Health Organization has put together an FAQ thread here.

"Coronavirus, stop": 38 Celebrities and public figures who have tested positive for COVID-19