What makes the Winegrowers’ Festival (aka Fête des Vignerons) unique is that it is a celebration of winemaking traditions that’s held only ‘once in every generation’ (roughly every 20 years). Organised by the Brotherhood of Winegrowers since 1797, this festival is Switzerland’s first living tradition to be inscribed in UNESCO’s Intangible Cultural Heritage List.

The open-air arena for this year’s event will be the largest one ever constructed in a town centre and it is equipped with 20,000 seats, giant screens, a huge LED floor and five stages. Psst… the main stage is as big as an Olympic-sized swimming pool! This three-week event will see tourists and locals alike being treated to performances and activities that’ll last from morning to night.

Established in 1947, this almost month-long event is dubbed the “most famous celebration of the arts and entertainment in the world” for a reason. Known also as ‘The Fringe’, this massive festival takes place all over the Scottish city every year in the month of August and it features a full programme of theatre, comedy, dance, circus, musicals, opera and exhibitions. In just 2018 alone, the programme included more than 3,500 events at over 300 venues! 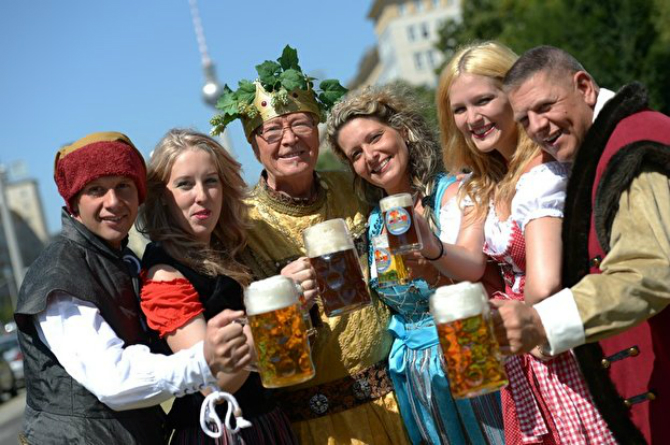 Did you know? More than 800,000 visitors from all over the world are expected to be celebrating this event in the heart of Berlin this month! Called “the longest beer garden in the world” thanks to its Guinness World Record status, this festival will take place on Karl-Marx-Allee, between Strausberger Platz and Frankfurter Tor for the 23rd time this year. So forget Oktoberfest, because this festival will showcase approximately 320 brewers from 86 countries who’ll present over 2,000 beer varieties on the 2.2km long street beer festival.

Nothing screams summer more than a water dance music festival. Think blasting water cannons, international DJs and heart-pumping performances, this is the place to be if you’re a big K-pop fan. Plus, it’s also a great way to escape the country’s summer heat! Bon Festival, also known as obon, is an annual holiday in Japan where locals who are Buddhist get to commemorate and honour their deceased ancestors. The religion believes that each year during obon, the ancestor’s spirits would return to this world in order to visit their relatives. The festival plays a huge part in Japanese Culture, hence why it is celebrated throughout the country.

Legend has it that in order to guide the spirits of the dead back to their homes, family members would hang lanterns in front of their houses and make offerings at the household altar. The lanterns are then released into the nearest body of water at the end of the festival so that the spirits can return to their spirit world. It might sound like a personal event that’s only meant for locals, but rest assured that it’s an occasion many tourists visit Japan for too.

Pronounced Zi-get and nicknamed “the island of freedom”, this is one of the largest multi-genre music and cultural festivals in Europe (some even say it beats Coachella). Born out of the collapse of the Soviet Union, the festival has been a hit since 1993 and it guarantees that attendees will be transported into another universe once they walk past the main gates.

People might purchase tickets for this festival because of the solid line-up it has every year (headliners for 2019 are Foo Fighters, Ed Sheeran, Florence and the Machine, Post Malone, Macklemore, 21 Pilots and the 1975!), but most stay throughout the weekend because there’s so much more to do besides dancing to music. And if last year’s event was any example, guests will be spoilt for choice in terms of activities (for example: bungee jumping, climate change workshops, yoga sessions and ceramics studio)!

A first of its kind in its country, this music festival held in the outskirts of Amsterdam is meant to present solely electronic music. The line-up for this year includes artists such as Alison Wonderland, Ben Sims, Claptone, D-Block & S-Te-Fan, Dillon Francis, DJ Rush, Erick Morillo, Friction, Groove Armada, GTA Headhunterz, Jonas Blue and Nicky Romero. The list goes on with more than 300 names that will be performing live on 17 stages set on fire. Another reason why it’s a summer hit? It’s camper-friendly! From luxury lodges to tiny houses, group tents to festival caravans, there’s plenty of lodging options for anyone attending.

Want to watch the streets of West London come alive? Here’s when you need to go.

A yearly celebration of London’s Caribbean communities, this carnival which takes place over the course of two days, usually features parades, live music, yummy Caribbean street food and performers who are dressed to the nines. Not only is it fun, it’s a great way to learn about the history of Caribbean traditions and their culture.

Known to the world as a cultural phenomenon, this gathering (or community as they call it) is an eight-days long event in the desert that runs on the 10 lofty principles: Radical Inclusion, Gifting, Decommodification, Radical Self-reliance, Radical Self-expression, Communal Effort, Civic Responsibility, Leaving No Trace, Participation, and Immediacy. Besides that, a theme is set each year for attendees to follow; this year, it’s ‘Metamorphoses’.

For over two decades, Burningman has always been set in a temporary city that’s constructed from scratch by the attendees and will usually include crazy costumes, art installations, musical performances and lots of partying. It is made into a playground for guests to test their boundaries, celebrate self-expression, experience personal transformation, participate in communal bonding and cultural renewal. In 2017, close to 70,000 people attended the event and the number is reported to increase to about 100,000 this year.

Ready to take your love for tomatoes to a new level?

Every year at the end of August, over 40,000 people would visit the small town in hopes of throwing overripe tomatoes at each other in this state-sanctioned one-hour food fight. We’re not kidding. This beautiful mayhem is an actual festival that has been around since 1945! One thing to note: the tomato battle begins precisely at 11am so if you ever plan to visit, be sure to reach early so that you can find a good spot in the town centre of Plaza del Pueblo.