BURO Bar Lingo: Your pocket guide to the types and aging classifications of brandy

The water of life 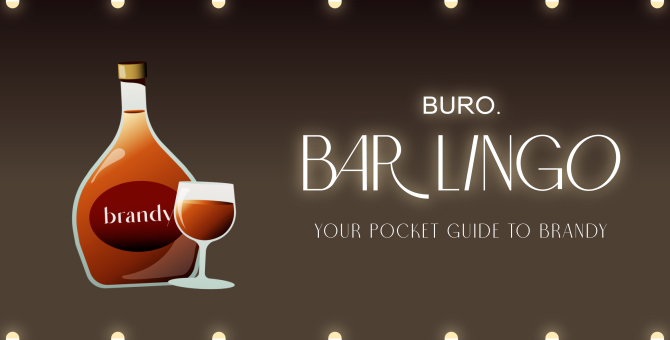 Brandy is not a liquor many would typically order at the bar or add to their alcohol cabinet. It’s one of those alcoholic beverages that has a rather complex and sophisticated image, which may put off beginners to the booze.

However, brandy is not the masculine drink that only old men have with cigars. Neither is it merely accessible by those from a certain status or prestige. On the contrary, there’s a vast range of brandies with different taste profiles, which could very well appeal to a younger and larger market—if branded correctly.

To help demystify brandy, we break down what it is, how it is made, what terms like VSOP and XO mean, and the common types of brandy available today.

Brandy is a type of liquor made from fermented fruit juice. Although grape juice is the more common choice, it can also be made from apricots, apples, and cherries. The name comes from the Dutch word brandewijn, meaning “burned wine.” This is because brandy is traditionally made by applying heat from open flames to wine.

It is a distilled spirit with 40 to 50 percent alcohol by volume (ABV) and is 80 to 100 proof—though the alcohol content can vary depending on the type of brandy. Brandy is commonly consumed straight at room temperature or over ice as an after-dinner drink, and can also be mixed into cocktails.

How is brandy made?

Although there are no global regulations for brandy production, some regions or distilleries may impose strict standards to achieve a certain style. Generally, there are four steps to making brandy:

Fruits such as grapes, apples, cherries, or apricots are fermented into wine by introducing yeast, which converts the natural sugars into alcohol.

The fermented juice is distilled under low heat to concentrate the flavours and alcohol. Copper pot stills are the traditional vessel for distillation, although some distilleries use continuous column stills.

After distillation, the liquor is left to age in wood barrels (typically oak) for several years. Before brandies are aged, they are called “eau de vie” (French for “water of life”) and may rest in stainless steel tanks or a similar vessel for a short time to mellow.

The final step is to blend different barrels of brandy or eau de vie with water to achieve the desired taste and bottling strength.

There are many types of brandy that differ in terms of fruits, fermentation process, distilling techniques, and distillery location. Take a look at eight common types of brandy below.

Originating from New Jersey in America, applejack is a type of brandy made from fermented apple juice. Its name is an amalgamation of the apples it is produced from and the jacking process, which involves freezing hard cider and removing ice from the mixture to increase the alcohol content.

Armagnac is made from grapes grown in the Armagnac region of Southwest France. Like cognac (see below), it is strictly graded in France.

This is a type of Spanish brandy that is made exclusively in Spain’s Sherry Triangle region, in the Jerez area of Andalusia. It is a side product of sherry production, made by distilling the wine.

Calvados is a type of brandy made in the Normandy region of France. It is usually made with cider apples, but can also be made with pears grown in the same region.

Cognac is a type of brandy that is made from white grapes specifically in the eponymous region of Southwest France. It is strictly graded in France and is considered a symbol of French luxury. (Note the difference: all cognac is brandy, but not all brandy is cognac.)

Grappa is a type of brandy that is produced from leftover grapes (the skin, pulp, seeds, and stems) used for making wine. It is made in Italy, the Italian region of Switzerland, or San Marino.

Pisco is a South American brandy distilled from wine or fermented grape juice. It is usually colourless or yellow-to-amber in hue as it is required by law to be rested in neutral vessels like stainless steel, instead of wooden casks.

The aging process helps to remove harsh flavours from alcohol while adding colour, flavour and character from the wood to the spirit (with pisco being the exception). Although there may be differences with regard to the aging requirements for specific distilleries, brandy can be broadly grouped into the following categories:

The brandy must be aged for at least two years. Other designations for this category include “3 stars” or “luxury”.

The brandy must be aged for at least four years. Other designations for this category include “5 stars”, “Old” or “Reserve”.

Generally, the brandy must be aged for at least six years. However, a new 2018 rule for XO Armagnac and Cognac requires a minimum age of ten years. Other designations for this category include “Napoleon” or “Old Reserve”.