A look at Loewe’s head-turning, fruit-chomping campaign for SS18

Ripe for the picking 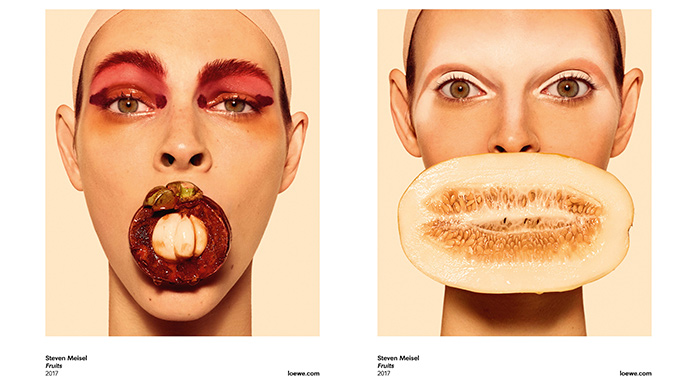 Loewe’s creative director Jonathan Anderson is taking the consumption of fashion quite literally for its Spring/Summer 2018 women’s collection. As a prelude to the runway presentation in Maison de L’Unesco, Paris this September 29, a series of original works by acclaimed photographer Steven Meisel will be displayed on more than 500 kiosks across the capital. Aptly titled ‘Fruits’, the series of five portraits features Italian model Vittoria Ceretti holding an assortment of fruits in her mouth—”a modern interpretation of the long-standing subject of depicting fruit in art,” according to the press release by the Spanish brand.

While there seems to be a hint of allegory within the brazen close-up visuals, Loewe has mentioned that the campaign is neither symbolic nor literal. Fruits such as dragonfruit, pomegranate, and mangosteen are cut into half and placed in Ceretti’s mouth, with equally head-turning face makeup courtesy of Pat McGrath to complete the looks. These striking compositions “point evocatively to notions ranging from taste, nature and biology to disguise, artifice and desire.” The campaign images are scheduled to appear from 28 September to 4 October 2017 on a billboard outside the Loewe St. Sulpice atelier—be sure to check ’em out if you’re around town for Paris Fashion Week.

For an Ibiza you’ve never seen: Listen to Loewe’s “Close to Paradise”