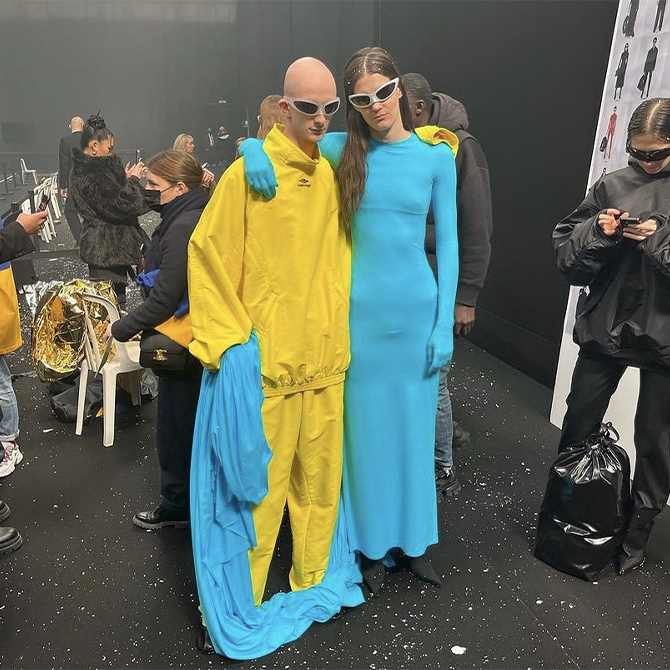 On the morning of February 24, smack bang in the middle of Milan Fashion Week, Vladimir Putin sent military forces into Ukraine, setting off the beginning of an ongoing war that has since resulted in thousands of injuries and deaths. As the runways continued and protests took place, calls quickly came for the wider fashion community to acknowledge and address the global conflict, with emerging talent platform 1Granary––founded by Ukrainian creative Olya Kuryshchuk––publishing an open letter that asks fashion businesses and their leaders to stand together against the ongoing crisis.

Shows have moved on to Paris since then, with the industry scrambling to find ways to show their support from afar. On the runways, designers offered intensely personal answers to how fashion could fit into a world turned upside down by crisis. Balenciaga’s Demna, who posted a statement about his own experiences as a refugee, unveiled his AW22 collection inside a VR snow globe, where models marched defiantly forward as a blizzard raged on. Rick Owens focused on beauty, while Giorgio Armani presented his collection in complete silence as a sign of respect for Ukraine. ​

In a movement spearheaded by Argentine model Mica Argañaraz, models who walked the Autumn/Winter 2022 season are also pledging their earnings, be it partially or entirely, to organisations providing essential aid and services to Ukrainian refugees. This includes the Hadid sisters, Kaia Gerber, Aylah Peterson, Kiki Willems and Vittoria Ceretti who all stated that they would be making a donation from their earnings to Ukrainian organisations.

Beyond fashion week, various luxury conglomerates and houses have suspended sales in Russia in an act of solidarity, as luxury retailers have been left out of the sanctions introduced by the West. Hermès and Richemont were among the first to announce that they would pause business in Russia, with LVMH, Kering, the Prada Group, Chanel, and Burberry quickly following suit.

The companies and their respective houses have also pledged to take action with monetary support and on-the-ground aid for refugees, with Kering and Valentino making significant donations to the UNHCR (the United Nations Refugees Agency), while LVMH announced its donation of €5 million to the International Committee of the Red Cross (ICRC). Meanwhile, Chime for Change, Gucci’s charitable gender equality campaign, is donating US$500,000 to the United Nations Refugees Agency to provide emergency support to refugees fleeing violence in Ukraine.

Elsewhere, luxury online retailers like Net-A-Porter and Farfetch have also suspended deliveries in Russia, according to WSJ, while smaller brands from the fashion world have taken action to do their part too with a series of charity raffles, auctions and donations from sales taking place online.

Ahead, a rolling list of independent brands and designers who are fundraising to save Ukraine as the crisis continues:

The Scandinavian fashion announced that it was placing all of its Russian activities on hold and that they would be donating 100,000 euros to UNHCR and UNICEF to provide humanitarian help to those in need and to support relief work in Ukraine and its neighbouring countries.a

In support of Choose Love’s Ukraine Crisis Fundraiser, London-based designer Cressida Jamieson has created a T-shirt embroidered with the charity’s heart in the colours of the Ukrainian flag. All proceeds from sales will go towards projects who are providing vital aid and services to those still in and fleeing the country, including: emergency medical care, food, shelter, clothes, legal support, support for the LGBTQIA+ community and mental health support.

In response to the conflict in Ukraine, LVMH Prize candidate Knwls will be donating all profits from online orders placed from now through March 20 midnight. The brand is also currently offering 40 per cent off all products to support the British Red Cross’ Dec Ukraine Humanitarian appeal and Unicef.

Elleme has pledged to donate 100 per cent of proceeds from sales of all their blue and yellow products on their online store towards UNICEF’s Ukraine appeal. So far, the Paris-based brand has managed to surpass their goal of raising €10,000 to help families affected by the war in Ukraine and will continue to fundraise until they run out of stock or the end of the war.

The virtual fashion world has also stepped up. Digital fashion platform DressX, founded by Ukrainians Daria Shapovalova and Natalia Modenova, created an entirely virtual clothing collection in the colours of the Ukrainian flag, with proceeds helping to advance the country’s war effort.

Nanushka is partnering with the Hungarian Charity Service of the Order of Malta to help provide accommodation, food, clothing and transport for Ukrainian refugees. The Budapest-based brand has also pledged to avoid any wholesale deals with Russian markets and has since stopped delivering products to Russia. Their Paris Fashion Week presentation had a string quartet perform the Ukrainian national anthem, with makeup that nodded to the colours of the Ukraine flag.

Ganni has also paused all business with Russia and has pledged to donate 100,000 DKK to the Danish Refugee Council in support of the group’s efforts to provide aid on the ground in Ukraine.

Rejina Pyo has halted all business with Russia, including present and future wholesale and e-commerce shipments. The London-based brand has also pledged to continue donating funds to organisations supporting on the ground and continues to share resources on ways to help.

Warsaw-based bag label Chylak has raised nearly €10,000 (£8,300) from a weekend of sales to fund charities supporting Ukrainian refugees in Poland, including the Polish Center For International Aid, Polish Humanitarian Action, Rescue Foundation and UNICEF. The brand most recently announced that it would also be donating 10 per cent of their March revenue to the Institute of Mother and Child in Warsaw, in support of Ukrainian mothers and children being treated there.

Last week, Kim Kardashian announced that her brand Skims will be making a donation to the World Central Kitchen in support of their on-the-ground efforts to aid Ukraine.

Sustainability-focused Moscow-born designer Xenia Telunts has curated a selection of archival pieces from her eponymous label for sale, as well as a raffle for the brand’s trademark “The Marium Cardigan,” with all proceeds being donated to the Ukrainian Humanitarian Fund.