For a woman who has never thought about becoming a bride or getting married, it's surprising how Vera Wang has successfully carved this into her niche. In this exclusive interview, the bridal gown designer tells us all about her time in Paris in the 60s, her career moves and her "meringue dress" business.

How did you get into fashion?

Before it all, I was a professional figure skater. I tried to make the 1968 US Olympic team, but failed. When you fall down, you have to pick yourself up. The only thing that got my attention, after skating and ballet, was fashion, I have always been mystified by clothing. I thought maybe I could go to design school, but my father told me, "Go get a job". So I started working at the Yves Saint Laurent boutique on Madison Avenue. Then one day I met Frances Patiky Stein (Vogue's fashion director). She told me to call her when I was finished with college. I called her back two years later and she actually remembered me and got me an interview at Vogue.

Tell us about your stint in Paris.

I moved to Paris in the late 60s to study arts at La Sorbonne. It was a very controversial time for quiet traditional France. It started with a series of student sitting protests and turned into massive general strikes and a social revolution (the May 1968 events). But it was the same very moment that was very free and liberating. And I arrived right at this moment, when everything was going on in Paris. The whole world was changing. It was very exciting.

I lived on Avenue Foche in my boyfriend's friends' apartment. We went out to Castel, Regine's—one of the best places in Paris. It was so free, just like the famous Studio 54. You could meet whoever you can imagine there – from Alain Delon to Yves Saint Laurent and Lulu de la Falaise with their entourage. It was larger than life, everyday was a new lesson. Really cool for a 19 year old American girl, no?

Who inspired you the most out of everyone?

I've been always influenced and inspired by French designers, especially Yves Saint Laurent. He was so young, brave and extremely talented. Before him, French brands were beautiful, but still too proper, too couture. He totally resurrected fashion. He put women in gipsy dresses, showed them half-nude, inspired by his trips to Marrakesh. He brought camouflage jackets on the runway as a sign of protest against the Vietnam War. He opened haute couture to the sexual revolution by putting women in double breasted jackets and tuxedos. So the French really invented fashion for me. My entire background was living in Paris.

What has been the highlight of your career then?

I've lived so many lives in fashion. But I never would have imagined that in one of them I would receive the highest civilian distinction—the La Légion d'Honneur. It was something completely unexpected for me, as an American designer. It's an outstanding honour to join such recipients as Alber Elbaz and Agnes B. When I asked Gerard Araud (the French ambassador for the United States) "Why me?", he told me that he knows about my endless love and devotion for this country and how it affected my career and my whole life.

After a year of internship in Vogue, I became a fashion editor. Best hair design, best makeup, best photographers, most beautiful models and most interesting celebrities – everything in the world was available to Vogue. Can you imagine what it's like to work with people of that calibre? It was kind of incredible when I think back on it. Afterwards, I started working for Ralph Lauren as a designer director: no limits, huge budgets.

The infrastructure there was so enormous when compared to Vogue. Vogue was tiny, there were only four of us. It was so fascinating to see that much money and power in one place. When you work for the best from the beginning, you receive a different level of education. This is why I say that the secret of a successful career is in working with the people you admire.

That must have set the Vera Wang brand in motion though.

Can you imagine starting your own business all over again at 40, after having two careers like that? It has been very hard. All doors that are open when you work in a big company – they shut when you go ahead on your own. I felt like a student, like a "debutante". I used to laugh and say: "I'm not a young designer, but I am an old new designer". 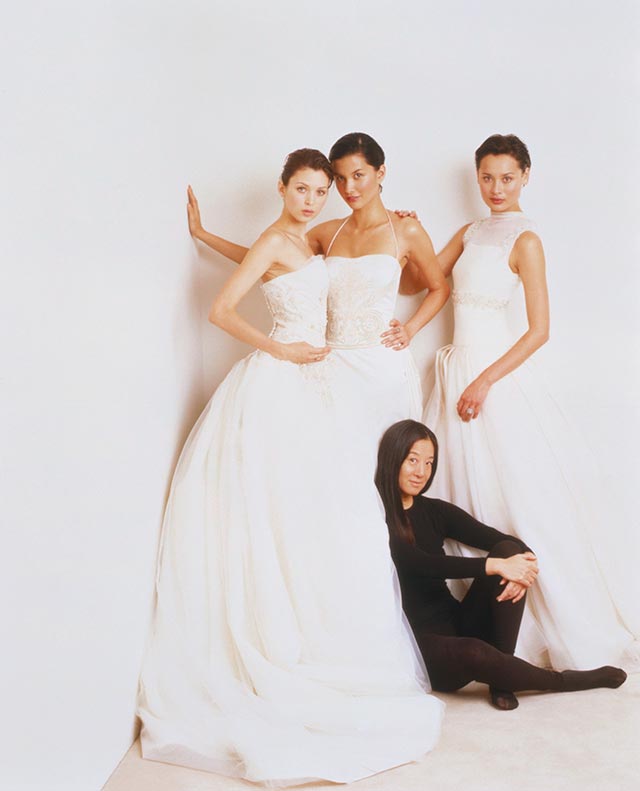 What do you think have contributed to your success then?

My business started from scratch in a little store. I was fearless because I knew absolutely nothing about bridal wear – only that it was all about meringue dresses. It was sort of instinctive. The success of our business was in that I wasn't a bridal designer, we have been always more fashion-oriented. We brought fashion to bridal wear. Then in 2000, we introduced our prêt-à-porter collection where I could finally expand my own vision of women.

Did you use to fantasise about your dream wedding gown?

I have never wanted to be a bride and to get married. Ralph Lauren used to call me a fashion nun. Calvin Klein laughed when he found out that I wanted to make wedding dresses. I wasn't a bridal person at all. A couple of years ago, my assistant found my own wedding dress in our New York offices – I completely forgot where I left it.

Tell us a little about your design ethos.

I don't like bright colours. There must be a reason to do colours. You'll be surprised but I work easier in dark, in black. Because there is some maternity in it, it helps the designer. Black is more abstract. You can see the shape and feel the texture better. All these colours, prints and details start to hurt your eyes. There are two sides of fashion for me: architectural and decorative. Some designers are amazing decorators, but I believe more in pureness and architecture.

What are your thoughts on the bridal business?

Bridal wear, strangely enough, is not as global as one could think. It is still very country-driven and tradition-driven. Russia is different from China. New York is different from Miami. Some brides want to look young and sexy. Others want to show a certain level of wealth – then we go all the way. You want real couture? We can do real couture! But we always strive to look fresh, modern and sophisticated.

Having been in the business for so long now, what have you noticed between the designers of yesterday and today?

I can't simply do anything I want, because I have a business and a brand to protect. But I do respect the freedom that young designers have. I always wondered, if we do not encourage them enough to take chances and to create things that aren't just commercially viable, where will the creativity come from? We have to preserve our artistic freedom.

Your generation is the most educated generation that has ever lived on earth. We are a very "now" society. But if you don't study the past, you will never understand where it comes from. If things go too fast ahead, they will slow down. Because in a way, everything is cyclical: art, fashion, politics.