5 Things to know about Prada Resort 2019

1. Miuccia Prada was in the Big Apple this past weekend in time for the Met Gala that's happening tonight (NYC time), hence the obvious choice to host the show in Prada's headquarters on West 52nd Street. The building was an impressive sight to behold. Designed by Basel-based architecture firm Herzog and de Meuron, the space boasts arresting concrete pillars alongside semi-transparent floating panels adapted from existing windows, with images of virtual cityscapes projected onto the boards.

2. Prada took the term "infinite cities" to a whole new level with live streaming of the show — broadcasted across multiple screens in Times Square, while hanging transparent screens inside the show space featured images of New York City and digital cityscapes played over (and distorted) as the models walked by. What a view.

3. Clothing wise, Prada trudged through the archives (specifically her collections from the 1990s) for references this season. Her signature "ugly prints" were a mainstay of this collection, appearing in the form of low-slung trousers and chic jackets; while dressy options include brocade suits, amazing leather coats and belted miniskirts with ruffled detailing.

4. Not to be missed is the new take on the Prada logo, spotted everywhere from pockets of polo tees to the corners of the aforementioned miniskirts. The accessory game was played excellently that day — and Prada definitely looked to the present when it came to sizable trapper hats (in brocade and with the new inset logo, no less) atop the models' heads. Rich fabrics were incorporated for the shoes, including loafers in jacquard that had the logos peeking out on the heels and uppers. 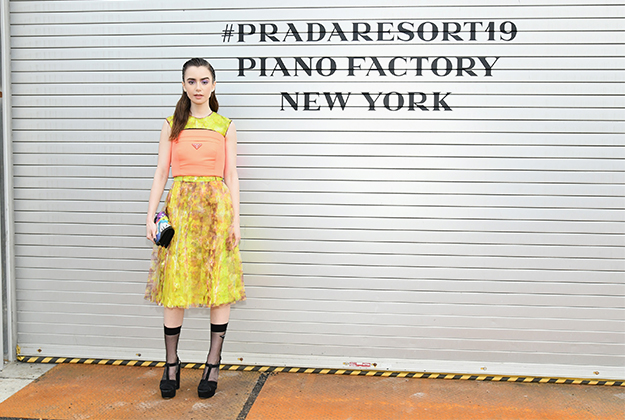 Shifting backgrounds at the 'Graphic Rooms' by Prada

Prada proves that crystal-studded eye makeup is here to stay