One of our favourites of Day 3 Paris Fashion Week AW16 had to do with the unpredictable and outlandish, even clothes that were almost implausible to wear in the real world. And by that we generally mean whatever was on the runway of Rick Owens AW16. Aptly-named “Mastodon”, a species of extinct mammals distantly related to elephants, his collection weaved in fuzzy mohair, insanely matted hair (or head) cocoons, intense draping techniques on display with dresses and jumpsuits—at times infused with different shades of spring-like green and orange, which was a welcoming spectacle. Speaking of colour, Olivier Rousteing did what he does best at Balmain, spewing body-hugging numbers in pastel shades embellished in anything decadent you can think of: tassels, pearls, crystals and the like that will make the Kardashians (or Jenners) proud. What was new were corsetry and waist-shaping belts, apparently because he was very much inspired by the OG supermodels of the 90s (as spotted in his SS16 campaign) and their curvy figures. 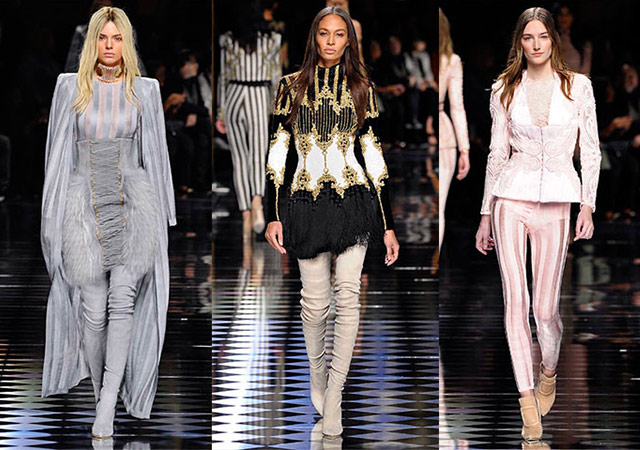 But the colour-phobic amongst us all would appreciate Sébastien Meunier’s noir collection that had melancholic undertones at Ann Demeulemeester. Black (obviously) was the theme of the night with a few metallic details and masculine tailoring, evidenced by scores of topcoats and draped silhouettes—some of which you can imagine a brooding French poet or even fallen rockstar to wear. On a lighter note, Clare Waight Keller looked to an inspirational French journalist from the 1970s whom one can coin a serial wanderluster—Anne France Dautheville’s solo motorcycle travels covered 20,000km across three continents—for Chloé AW16. It was only natural that the collection was a boho-infused biker-inspired one made for the cool Glastonbury-traipsing girl of today who enjoys a shot of adrenaline in her blood from time to time. Shearling and knit ponchos reigned, alongside embroidered kaftans and sheer tiered ruffled dresses, punctuated with leather biker pants and even a full-length dress(!)