1.     The four fashion houses—Chanel, Dior, Louis Vuitton and Gucci—are all showing their Cruise 2019 collections in France this round, but Nicolas Ghesquière continued his love for museums with a show at the Fondation Maeght—a museum of modern art, located on a hilltop overlooking Saint-Paul-de-Vence. The statues and sculptures by famed artist, Joan Miró, served as the backdrop as the show took place at the garden.

2.     The show might just be one of the most star-studded Cruise shows this month. Spotted on the FROW: the Louis Vuitton squad—Jennifer Connelly, Léa Seydoux and Emma Stone (who was recently revealed as the new face of the brand). Other celebrity guests include Sehun Oh from K-pop band EXO, Ruth Negga, Sophie Turner and Taiwanese actress and singer, Rainie Yang.

3.     The clothes sent down the runway were definitely influenced by the artworks at the venue. Voluminous silhouettes were a mainstay of the collection, and fun feathers and sequins gave the looks that added texture and interest. But it was the eclectic mix of styles that took centre stage. The opening number is reminiscent of a female Jedi; colourful Damier checks gave off a hint of court jester vibes; deep V-neck dresses were paired with cowboy hats; and sharp tailoring added that bit of structure to the overall looks.

4.     One of the most talked about pieces from the collection? The footwear. Inspired by its hottest shoe of the moment, the Archlight sneakers, Nicolas Ghesquière introduced a new iteration for Cruise in the form of boots. Thigh-high and ankle leather boots reprised the chunky soles of the sneakers, and we can foresee the mash-up to be another hit when they arrive in stores. 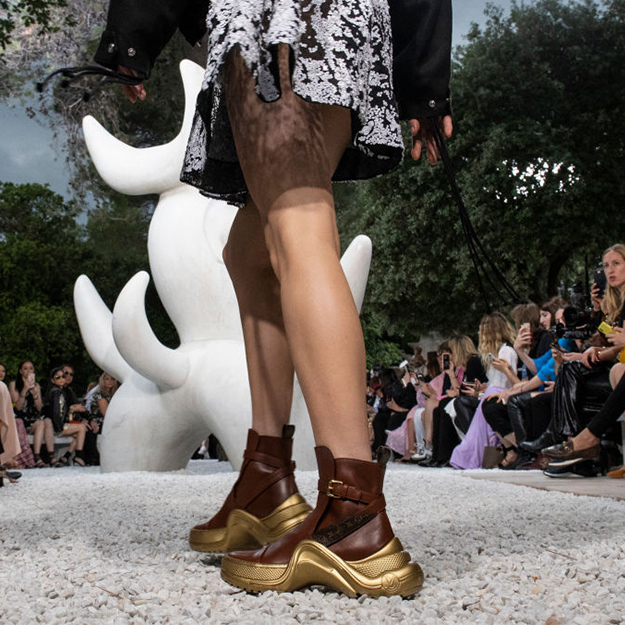 5.     Aside from its Cruise 2019 collection, Louis Vuitton also debuted a collaboration with Grace Coddington. Aside from bags in the shape of cats on the runway, the British stylist and editor also added her spin into the brand’s monogram prints, fusing them with illustrations of her two cats—Pumpkin and Blanket, and Nicolas’ dog, Leon. The full collection will reportedly be launched in October.