Cheetos had a fashion show

Yes, you read that right. Cheetos—the snack brand—hosted an exclusive runway show on the first day of New York Fashion Week, showcasing its 'Flamin' Haute' collection that is inspired by the bright red and orange hues of its cheese-flavoured snack. The whimsy pieces include a logo-print sling bag, polka-dot peep-toe booties, and Cheetos pins that adorned the blazer lapels.

Tomo Koizumi amped up the drama

Tomo Koizumi was no doubt the breakout star of NYFW Autumn/Winter 2019, so naturally, all eyes are on the Japanese designer as he presented his second collection at the basement of Marc Jacobs' Madison Avenue store. And let's just say he did not disappoint. Transgender model Ariel Nicholson's performed a silent play before changing into several colourful tulle gowns, before making her exit in an all-white look complete with a veil.

We can't think of a better name than Janelle Monae to perform at the black-and-white themed Ralph Lauren show at Ralph's Club. After all, the star is one of the few who always manage to bring monochrome tones to a whole new level. At the Jazz Age nightclub, attendees—including Henry Golding, Mandy Moore and Cate Blanchett—were treated to an unforgettable performance by the singer, who brought the house down that night by singing on tables and more.

For the second Tommy x Zendaya collection, Tommy Hilfiger brought guests to Harlem's iconic Apollo Theatre, but instead of showcasing the collection in the one of the halls, the brand moved the runway to the back alley, and transformed it into a block party. This see-now-buy-now collection is inspired by the '70s and the African-American community, and trust us when we say that the energy that night was through the roof. Another thing we love? The diverse line-up of models which included different sizes (a pregnant Ashley Graham was walked the show!), ages, and races.

Forget the typical music soundtrack—this season, a choir seemed to be the way to go. Both Pyer Moss and Michael Kors are no strangers to including live performances in their show. While it has been a tradition for Pyer Moss to soundtrack his event with the oh-so-talented Tabernacle Drip Choir, Kors has previously hired legends including Barry Manilow to sing at the event. The designer mentioned that he knew he wanted Young People's Chorus of New York City to perform after seeing their performance for the first time. 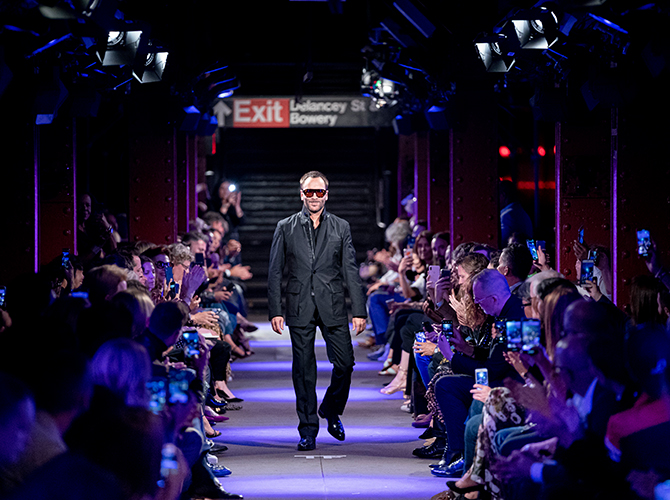 Surprise! Instead of the streets of New York City, Tom Ford took over an abandoned platform of a subway station—which many didn't know existed—to showcase his Spring/Summer 2020 collection. Models strutted down the runway in looks that strike the right balance between street-cool and glam. It was an unforgettable showspace, for sure.

The Blonds and Moulin Rouge's collaboration

Luxury apparel brand The Blonds also aimed to give show-goers another new experience this season with a fashion show in collaboration with the original Moulin Rouge musical. Theatre performer and Pose star Billy Porter kick-started the show with an exhilarating performance, while array of bejeweled and printed boydsuits and sparkly headpieces graced the runway.

Although Rihanna previously announced that no photos are allowed at her upcoming Savage x Fenty show, that didn't stop people from posting images from the show online. Nothing much has been revealed through the photos, but fans can watch it on Amazon Prime starting September 20, and its line-up of performers including Halsey, Migos, DJ Khaled, Big Sean and more will no doubt make the event an epic one. Will the show be the next Victoria's Secret Fashion Show? It's heading to that direction, for sure.

What can we say? We're a sucker for mummy-and-me moments! With 601k followers on Instagram, Alexis Olympia Ohanian Jr. is no doubt one of the most popular tots online. At Serena Williams' S by Serena Williams show during New York Fashion Week, the two-year-old's appearance in a black T-shirt and a pair of colourful Nike kicks during the finale definitely stole the show.

NYFW SS20 Street style: 20 Ideas on how to incorporate fierce animal print into your OOTDs