7 Most talked about moments during Paris Fashion Week SS20

This season, Maison Margiela is making headlines for more than just fashion. After its line-up of models strutted down the runway, model Leon Dame closed the show by stomping down the Grand Palais fiercely in his navy-inspired utilitarian look, and the distinctive strut, unsurprisingly, became a viral meme on social media.

Saint Laurent closed its SS20 show with a bang

We have Jennifer Lopez shutting down Milan Fashion Week at the Versace show; and at Paris Fashion Week, iconic supermodel Naomi Campbell made her return to the runway by closing Saint Laurent's Spring/Summer 2020 show in a sequinned paintsuit—a replica of the Le Smoking Suit she wore on the runway 17 years ago. The model took to Instagram to share a photo of herself with the late Yves Saint Laurent with the caption "Mr. Yves Saint Laurent, you believed in me and stood by my side when I needed it most! Grateful for you and for all the memories we've made together over the years. Kind-hearted, creative genius and fashion visionary! We miss you dearly."

The rain wasn't going to dampen creative director Bruno Sialelli's show this season. At the gardens of the Quai Brandy Museum, guests were handed headphones that played the soundtrack of the Lanvin SS20 show which featured excerpts from Lord of the Flies, French cartoon The King and the Mockingbird while models including Bella Hadid, Adut Akech and more walked in the drizzle. 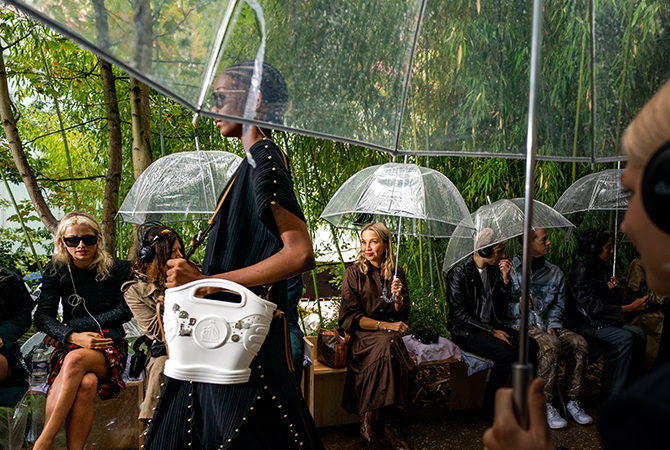 It's a comeback we didn't see coming; iconic couturier Christian Lacroix partnered up with designer Dries Van Noten with for the latter's SS20 collection, and it's no doubt what fashion dreams are made of. Marking his first designs since 2009, the French designer injected his 18th Century references into the collection, with details including trompe l'oiel fur, jacquards, sequins and more bringing the looks to new heights.

Issey Miyake has always been known for its innovative designs, but this season, the Japanese brand's new head designer Satoshi Kondo is determined to make his debut a memorable one by amping up the fun. Models who appeared in skin-coloured underwear before colourful dresses floated down on them. Once they were dressed, the models bounced along happily to the tunes that started playing. If only we could get dressed like this in the morning.

Speaking of bouncing, Balenciaga's lurex ball gowns were definitely some of the most memorable looks of the season. At the end of the show, Demna Gvasalia unveiled his version of eveningwear as he sent down five bustier ballroom dresses that referenced Cristóbel Balenciaga's legacy and his own street-cool drama. Want to be the belle of the ball? This is how you do it.

During the Chanel finale at the Grand Palais, as models took their final walk, an unexpected guest—identified as Youtuber Marie S'Infiltre—jumped onto the runway and inserted herself into the line of models. With no security in sight, Gigi Hadid took it upon herself to escort the prankster off the runway as she posed for the cameras. A Twitter user commented, "The designers, organisers and models work waaaay (sic) too hard, just for attention seekers to try to ruin everything on a very special day for them." We couldn't agree more.