The 6 most buzzworthy moments from Paris Fashion Week AW20

Following an outbreak of Covid-19 in Europe especially in Italy and France, fashion It-list such as Deepika Padukone and Chiara Ferragni have cancelled their Paris Fashion Week appearances to take precautions. However, the shows still went on as per usual for most brands, who all showcased their Spring/Summer 2020 collections in all its grandeur.

Below are all the buzzing news from the last leg of AW20 Fashion Month:

Think six years old is too early to start your music career? Think again. At the Yeezy Season 8 show, Kanye West and Kim Kardashian's daughter North West took the stage to deliver her own remix of ZaZa's "What I Do?" before her father joined her halfway, brimming with pride. Your thoughts aside, we got to hand it to her—this is probably the last thing we'd dare to do at six.

Watch a video of her performance here:

We're used to seeing supermodel sisters Gigi and Bella Hadid on the runway, but at Off-White, they were joined by a very special guest in the model line-up—mama Yolanda Hadid. The 56-year-old (who also used to model back in the '80s and '90s) surprised everyone as she strutted down the runway in a white tailored blazer and trousers look. The trio also shared a sweet moment backstage as they posed for photos before the show. 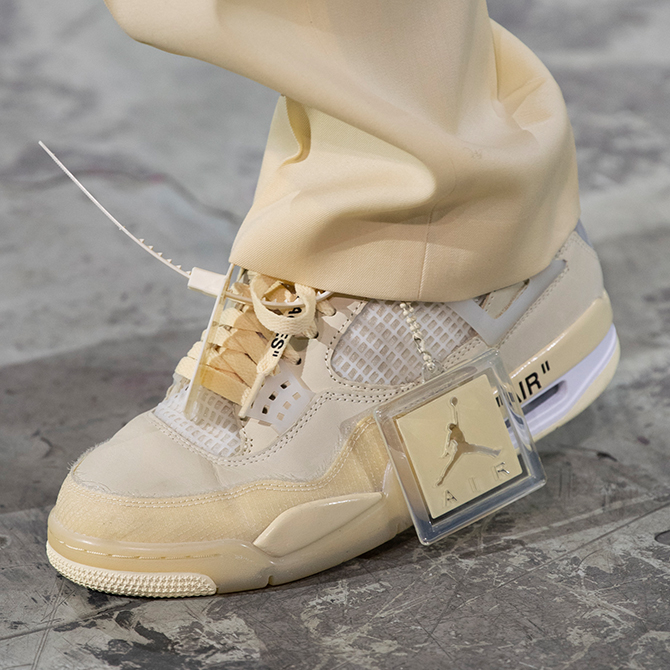 Speaking of Off-White, the brand also gave showgoers a sneak peek of the new kicks in collaboration with Nike. Less than a month after releasing Off-White x Air Jordan V, at its Autumn/Winter 2020 show, Virgil Abloh unveiled the Air Jordan IV in a pastel yellow colourway complete with the signature zip ties, "AIR" on the sole and "SHOELACES" on the laces. While the release date has yet to be announced, the sneakers will be exclusively introduced in women's sizing.

We kid you not. While Thom Browne is no stranger to animal masks and headgear—by famed British milliner Stephen Jones—on his runway, this AW20, it was an animal menagerie from the start 'til the end. From giraffes to pigs, models were sent down in pairs or threes in different animal headgear, dressed in a series of pinstriped looks before more deconstructed tailoring were spotted in the line-up. On their arms? 33 different animal-shaped bags in black.

Stella McCartney also made quite a statement this season. Models walked alongside other models dressed in animal costumes—we spotted a cow, a crocodile, a rabbit, a fox, and a horse—emphasising the brand's eco-friendly and planet-friendly ethos. In a statement to The Guardian, the designer says, "These animals are the ingredients of everyone else's fashion shows. We are the only luxury fashion house in the world that isn't killing animals on the runway. I wanted to make that point, but in a joyous way." And joyous it was.

Belgian designer Diane von Furstenberg is one of the most powerful women in fashion. Having started her brand in 1970, she has sold over 15 million wrap dresses, and on top of that, her philantrophy work—including raising USD $100 million for the Statue of Liberty Museum—and her involvement in championing women's right is worth mentioning too. In recognition of her achievement, former French minister and the first female president of the European Central Bank, Christine Lagarde awarded the prestigious Chevalier of France's National Order of the Legion of Honour. Some of its past fashion designer recipients include Vera Wang, Karl Lagerfeld, Maria Grazia Chiuri.

And this year's most stunning show-set goes to... Balenciaga! For AW20, Demna Gvasalia transformed the runway into his version of an apocalyptic world-the room was flooded with water while the screen on the ceiling projected different elements, from blue skies to fiery fire. Clothes-wise, the collection started with mostly all-black looks in interesting tailoring and silhouettes that emphasise the brand's craftsmanship—it was definitely one of his strongest collections yet.

The 7 most talked about moments from Milan Fashion Week AW20