Yes, Good Vibes Festival will be back again at The Ranch, Genting Highlands this year! Set to take place over 20 and 21 July, the homegrown festival promises a weekend filled with good vibes and stellar music. If you loved partying over at the Electric Fields in the past editions, you'll be thrilled to know that it will be transformed into the festival's full-fledged third stage in an adjacent field. Headlining the string of international and local acts over here will be Norwegian DJ Cashmere Cat and Australian DJ Anna Lunoe.

Good Vibes 2019 will also mark first-time performances by South Korean acts at the festival. Repping South Korea and R&B on the lineup are singer-songwriter Dean and producer/singer Rad Museum. Other notable international names on the bill include hip-hop duo Rae Sremmurd, singer-songwriter Daniel Caesar, ambient pop band Ciagrettes After Sex and alt-rock band Nothing But Thieves. Of course, there is a good mix of local acts on the bill too, such as Ryöt Jones, The Impatient Sisters, Goldfish + JHin, Bate, as well as up-and-coming bands Midnight Fusic and Lost Spaces.

Take a look at the full first phase lineup here. More acts will be announced so stay tuned! 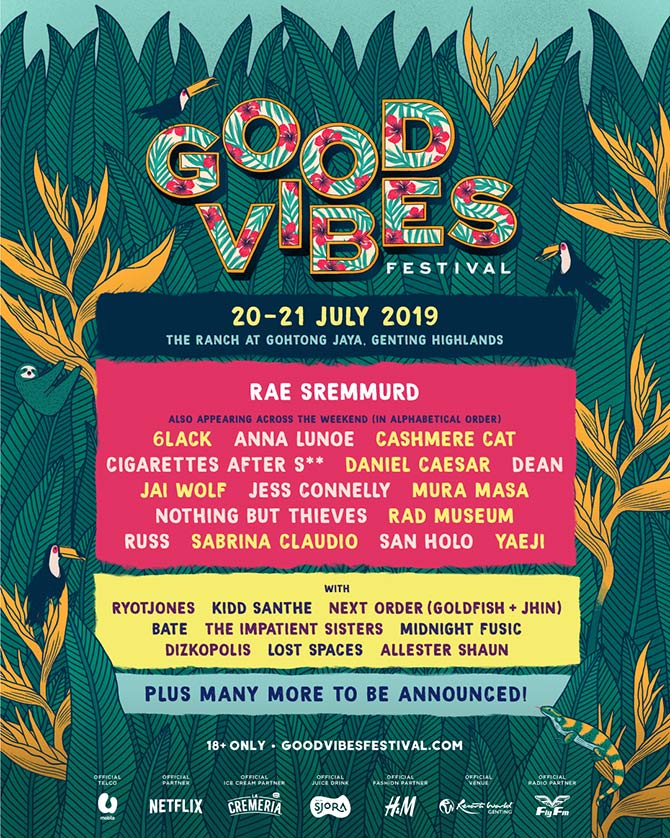 [Update] The full lineup is out! Find your favourite act on the list here:

General ticket sales will start on 26 March  at 11am, while U-Mobile customers get exclusive pre-sale access on 25 March at 12pm. For more information, head to the website.