After Camila Cabello's opening performance of 'Havana' along with Young Thug, Ricky Martin, Arturo Sandoval and J Balvin, host Alicia Keys kicked off the ceremony joined by a handful of very special guests for an ode to music and sisterhood. Keys, Lady Gaga, Jada Pinkett Smith, Jennifer Lopez and Michelle Obama each told personal stories of how music changed their life. Thunderous cheers and applause erupted in the room as the former first lady used her moment on stage to speak of music as a pillar of strength and unity:

"From the Motown records I wore out on the South Side (of Chicago) to the 'Who run the world' songs that fuelled me through this last decade, music has always helped me tell my story. I know that's true for everybody here. Whether we like country or rap or rock, music helps us share ourselves, our dignity and sorrows, our hopes and joys. It allows us to hear one another, to invite each other in. Music shows us that all of it matters, every story within every voice, every note within every song."

Another moment that surely left a smile on everyone's faces has to be the tribute to Dolly Parton, who was named Grammys' 2019 MusiCares Person of the Year in honour of her charity work. The all-star performance saw the likes of Miley Cyrus, Kacey Musgraves, Katy Perry, Maren Morris, Little Big Town, as well as Parton herself performing some of her biggest hits. 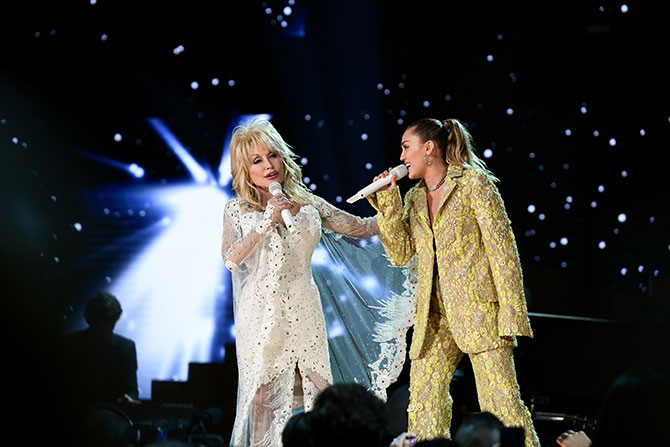 "I always wanted to play two pianos," said Alicia Keys as she opened the second half of the show. Needless to say, her wish was fulfilled. She expertly juggled two grand pianos with one hand on each, playing some of the songs that have inspired her through the years, including Nat King Cole's 'Unforgettable', Roberta Flack's Killing Me Softly, Lauryn Hill's 'Doo Wop (Than Thing)' and Kings of Leon's Use Somebody, before rounding it up with her very own 'Empire State Of Mind'.

Drake's appearance at the Grammys probably raised a few eyebrows at the beginning of the evening, seeing how the rapper is a vocal critique of the Grammys. We reckon he showed up just so he can give this speech after he won best rap song for 'God's 'Plan':

"I want to take this opportunity while I'm up here to just talk to all the kids that are watching this that are aspiring to do music, all my peers that make music from their heart, that do things pure and tell the truth. I want to let you know we play in an opinion-based sport, not a factual-based sport. So it's not the NBA where at the end of the year you're holding a trophy because you made the right decisions and won the games." 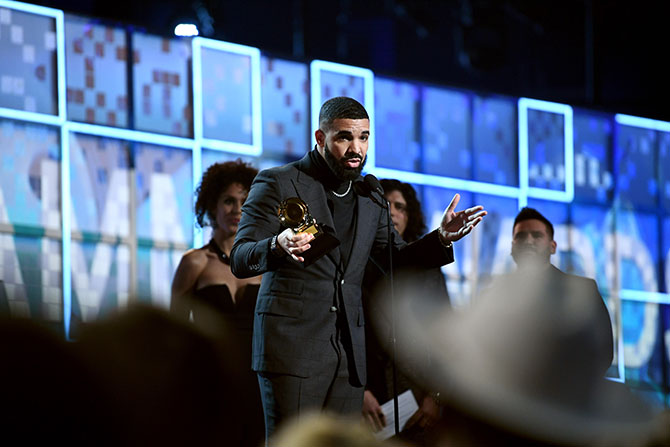 "This is a business where sometimes it's up to a bunch of people that might not understand, you know, what a mixed-race kid from Canada has to say or a fly Spanish girl from New York or anybody else. The point is, you've already won if you have people who are singing your songs word for word, if you're a hero in your hometown. Look, look if there is people who have regular jobs who are coming out in the rain, in the snow, spending..."

That is as far as he got before his mic was abruptly cut off. The show producers later explained that it wasn't deliberate, because he took a pause and they thought he was done. Hmmm.

Kacey Musgraves and Childish Gambino's 'This Is America' emerge the night's biggest winners with four awards each. Musgraves took home the covetable title of Album of the Year, while 'This Is America' makes history by being the first rap song to win both song and record of the year. Speaking of firsts, BTS became the first K-pop group to present at the Grammys, where they handed the Best R&B album award to H.E.R. The hugely popular group also had their album Love Yourself: Tear nominated in the category of best recording package. 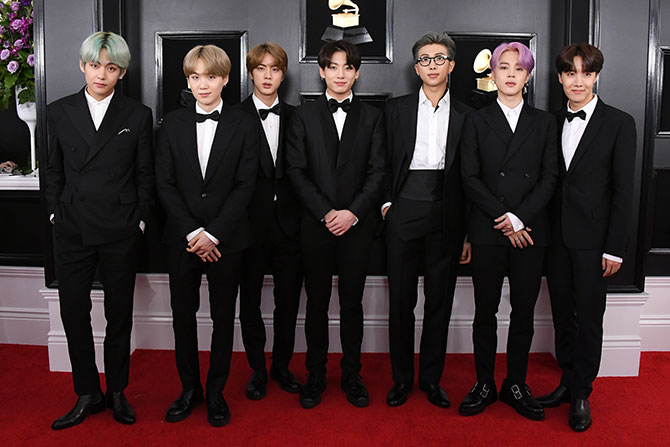 Record Of The Year
"This Is America," Childish Gambino

Song Of The Year
"This Is America," Childish Gambino

Best Urban Contemporary Album
Everything Is Love, The Carters

Best Pop Solo Performance
Joanne (Where Do You Think You're Goin'?), Lady Gaga

Best Americana Album
By The Way, I Forgive You, Brandi Carlile

Grammys 2019: The best (and the worst) dressed stars of the night