Are you ready for it?

22.07.19
Pop culture’s largest five-day convention has officially come to an end. From new movie trailer debuts to shocking revelations from your favourite TV shows, here’s a quick round-up of all the major announcements you might have missed!

This year's 50th annual San Diego Comic Con kicked off with a presentation from the director and cast of It Chapter Two. The upcoming horror film is going to be the sequel to the 2017 film adaptation of Stephen King's It. If you were a fan of the first thriller, then you'd be glad to know that this film picks up 27 years later, where the Losers club kids who once fought the terrifying evil clown monster Pennywise are now all grown up.

According to Director Andy Muschietti, while the movie mainly centers around the adults (played by James McAvoy, Jessica Chastain, Bill Hader, Jay Ryan, James Ransone, Andy Bean, and Isaiah Mustafa), It Chapter Two will also feature flashback scenes of the Derry kids. Besides that, he also put rumours of a trilogy to rest by revealing that this sequel would be the final film.

Fun fact: Jessica Chastain, who plays the adult version of Beverly Marsh in this movie, told the crowd at SDCC that the movie was like "Carrie on steroids" and that the film might have broken a world record for the amount of fake blood used. "4,500 gallons," she said.

IT Chapter Two hits cinemas in Malaysia on 5 September 2019.

It was a bittersweet moment at Hall H yesterday for the cast and showrunners of Supernatural. The fantasy TV series about two brothers hunting evil supernatural beings announced earlier this year that their 15th season, which premieres this October, will also be their final one - which meant that this would be their last Comic Con appearance. 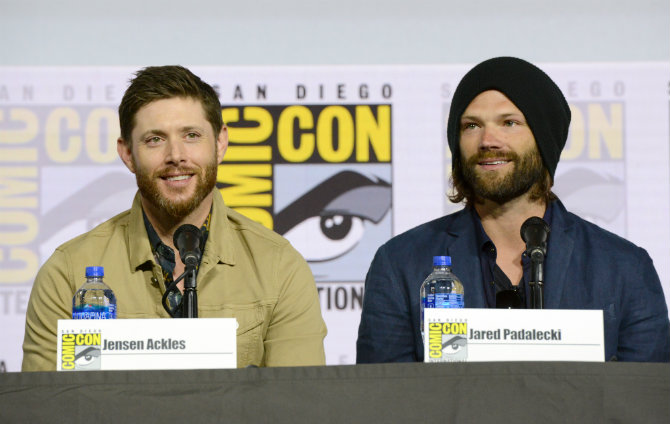 Cast members Jensen Ackles and Jared Padalecki were brought to tears as they bid farewell to their fans who also gifted them with a standing ovation when the panel ended. After 15 years and multiple SDCC appearances year after year, it's no surprise how emotional everyone would be, especially when a throwback reel of footages from the past 14 seasons was shown.

As for those of you who are curious about how this final season will end, showrunner Andrew Dabb reminded fans that they would not be able to please everyone. "I've been on the show for 12 years. The things we have in mind, about 30 percent of people will be really happy. If you thought Game of Thrones was bad, just wait."

So wait, we shall.

Be prepared for take-off

One of the biggest moments at this year's SDCC was when Tom Cruise surprised the crowd at the end of the Paramount Pictures panel with first footages of his new movie, Top Gun: Maverick.

Set to release on 26 June 2020, this blockbuster sequel was described as a "love letter to aviation" by Tom Cruise himself. Watch his full introduction below:

It's no secret that Riverdale's season four premiere episode (titled 'Chapter Fifty-Eight: In Memoriam') will serve as a tribute to the late Luke Perry. Luke, who played Fred Andrews (Archie's dad), in the teen drama series, passed away back in March following a stroke. Since then, the TV show has yet to officially address Fred's absence.

During the Riverdale panel at SDCC, the show's executive producer Roberto Aguirre-Sacasa revealed that Shannen Doherty, Luke's close friend and OG Beverly Hills 90210 co-star, will guest star in the aforementioned episode. Though her role is still being kept under wraps, he did describe it as "very emotional."

I am deeply honored to pay tribute to Luke on Riverdale. The care in which this show takes in honoring his memory is beautiful. He is missed. Today. Tomorrow. Forever.

With over 11 million views on YouTube in just two days since it was uploaded, the streaming giant's first official teaser for their new The Witcher series is already exceeding expectations. Based on a series of Polish fantasy novels by Andrzej Sapkowski that later got turned into a popular video game franchise, The Witcher is an epic tale of fate and family and will follow the monster slayer for hire named Geralt of Rivia as he battles mythical monsters and navigates the murky politics of the Nilfgaard Empire and Northern Kingdoms.

The eight-episode drama will be available on Netflix later this year and it'll star Henry Cavill as Geralt of Rivia, Freya Allan as Ciri, Anya Chalotra as Yennefer, Jodhi May as Queen Calanthe, Bjorn Hlynur Haraldsson as Eist, Adam Levy as Mousesack, MyAnna Buring as Aretuza, and Millie Brady as Princess Renfri, with Mimi Ndiweni and Therica Wilson-Read as novice sorcerers.

Fantasy (continues) to take over

We haven't seen Cara Delevingne in anything major since Suicide Squad, but that's all about to change! At Amazon Prime Video's SDCC panel last Saturday, Cara was introduced alongside Orlando Bloom as the stars of the subscription service's new fantasy-noir series titled Carnival Row.

Amazon gave fans at SDCC not one but two sneak previews of the eight-episode series which is set to premiere on 30 August. Orlando and Cara will be playing star-crossed lovers in a Victorian fantasy world filled with mythological immigrant creatures.

Does this line-up make you excited for the second half of the year? We know we are!
movie
tv
Trailer
SDCC

Why cancel culture is more problematic than you think

4 Apps and websites to track your TV shows and movies