Interview with Alice Shirley, the artist behind Hermès’ scarves Last week, we found ourselves walking through the dark, narrow hallways of the seventh storey at Liat Towers, with only the seductive disco bass of electronic Parisian duo Polo & Pan leading the way. As we entered the dark lounge — which Hermès had converted from an open-air carpark for the store’s re-opening party — faces were slowly lit by projections emanating from the ceiling. Characters from Hermes’ scarf collection, including tigers and zebras illustrated by Brit artist Alice Shirley, darted about above; casting their soft glow onto the deck chairs where guests sipped on mixologist Peter Chua’s cocktails and picked at JAAN’s creative canapés.

The children’s book author and illustrator is no stranger to whimsical creations — for her first solo show ‘Fathoms’, Shirley used squid ink to draw a giant mollusc; a drawing which extended to nine metres. Discovered by Hermès in 2014, she has been responsible for some of their most curious creations — a zebra with parrot-like wings, a tiger surrounded by flowers, and a sea turtle looking to lay its eggs. Since the Hermès fall/winter 2014 silk carré collection, the Fine Art graduate from Central St. Martins has worked with the brand from producing scarves to other forms of media; including the hypnotic illustrations for the Hermès store re-opening party in Liat Towers.

How did Hermès discover you?

I was studying at the Royal Drawing School in Shoreditch when I met Hubert and his twin brother Xavier Guerrand-Hermès, members of the Hermès family. They were having a joking squabble over which of them would buy my sketchbook that was on display. I told them that it was not for sale. So instead, Hubert asked to buy a copy of my children’s book, Aesop’s Fables as a folio edition with original illustrations tucked in the pages. He said he liked foxes, so I made sure there were lots of fox sketches!

As a thank you for buying my book, I sent him a hand-coloured etching of some iguanas being ridden by mice. He liked this so much he sent it to Christine Duvigneau, head of the Studio Dessins, who gave me a call and asked me to come to Paris with my portfolio.

I was worried about showing her my work, and her not liking anything, because at the time, I was drawing lots of sea-monster specimens. Christine and Bali Barret, head of women’s silk, liked a tiny sketch of a zebra in my sketchbook and asked if I could develop that as an idea. Two months later, I came with the finished painted design of Zebra Pegasus. Christine and Bali were rather surprised and said that they did not normally work like that; designs are usually developed slowly with many sketches. But they loved it, and decided to buy the design straight away. 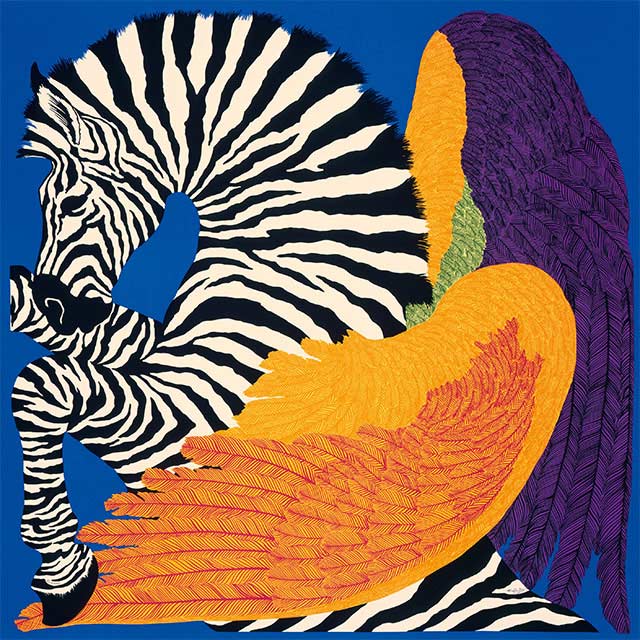 Some of your work for the masks and Hermès scarves feature endangered animal species and habitats. When did you see the need to incorporate and raise awareness for this cause, and what was the creative process behind this?
I make work about nature to understand it better. Every new piece involves extensive research, whether it is about animal behaviour and movement, plant reproduction, mineral deposits from extinct coral reefs, plate tectonics or the way sea-monsters make me feel about the open ocean. All research helps me understand how the world is put together, and therefore help me understand my place in it better.

I can explore the emotions that all this information brings, and make work that reflects that. Humans are conspicuous by their absence in my work. This is reflective of my opinion that wild nature is best at recovering when left to its own devices, and allowed to re-assert itself. Humans do not need to use, utilise or exploit every part of the globe, there is plenty of room for everything.

As we work harder towards a zero-carbon economy, which I do believe is achievable in my lifetime, and clean up the devastation of plastic waste, develop farming in a way that does not damage ecosystems — then nature will once again flourish.

Your studio’s based in Camden. How does the location inspire you as an artist?
It has remained wonderfully un-trendy, and has a glorious assortment of humans in it, dressed more eccentrically than any other part of London. My local Sainsbury’s always has some interesting people shopping around, no matter what the time of day or night. Away from the throngs of tourists, this is where you see the real residents of Camden going about their daily lives. Camden is also close to two of my favourite parks in London — Regent’s Park and Hampstead Heath, which are wonderful to escape to when wanted or needed.

You’re also an author and illustrator of children’s books. What were some of your favourite children’s books growing up?
Favourites included Roald Dahl’s books — all of them, he was genius! Terry Jones’ Fairy Tales were also wonderful and beautifully illustrated by Michael Foreman. I loved Kathleen Hale’s Orlando The Marmalade Cat book series, which were wonderfully funny and charming to look at. A book I remember vividly was The Secret Oceans by Betty Ballantine, which was filled with incredible underwater wildlife scenes, which I would pore over. I was also always drawn to classic fables, myths and fairtales. I particularly loved ancient mythological stories, and still do. They are stories you can never outgrow. Where do you get your characters in your children’s books from?
My first book for children was my own edition of Aesop’s Fables, which is a classic collection of stories dating back to Ancient Greece, Egypt and Persia, all attributed to the storyteller, Aesop. They are stories of cunning, deceit and the law of the jungle. The Victorians added morals at the end of each story to make them have more Christian values, but in my edition I left the morals out.

My second book The Gentle Lion and the Little Owlet is based on a real-life story that I read in a newspaper about a baby owl that fell in the lion enclosure of a zoo in Devon, and lived there for a week before flying away. My version of the story is rather more embellished.

What sort of stories do you think children gravitate to these days?
As I don’t yet have my own children, I could not tell you. I do know that I enjoyed to be frightened a little bit by stories. I enjoyed the thrill of adventure. I am pleased that Disney is finally creating strong female heroines that are not just falling in love with princes. Gender stereotypes can be challenged when people are adults, but if children learn at a young age that gender plays no part in their ability to do any job at all, we will have a much fairer society in the future.

We love the fauna you’ve illustrated in the Hermès Liat Towers re-opening invite. Can you share more about some of the most beautiful gardens you’ve visited?
I think a garden articulates so much about a city or place, it says so much more than just what plants grow there. It can be a place of contemplation, wonder, intimacy or grandeur, wealth or huble simplicity. I visited both the Botanical Gardens and the Gardens By The Bay while visiting Singapore, which were equally fascinating. One steeped in the rich history of the past, the other showcasing a wondrous vision of the future, and I loved both. In London my favourite is a secret garden few people know about, and I would like to keep it that way. I like to go there and think. It is a beautiful quiet intimate place filled with birdsong at this time of year.

Lastly, if you could pick an animal you think best represents your personality, what would it be?
An otter. Take the Hermès ‘Unusual Questions for A Male’ quiz

One to watch: The ‘Orchestration of Time’ by Hermès