Ever wonder how science can be art? A glimpse into the world’s largest scientific experiment shows us how

Did you know? Some 10,000km away from us at the Swiss-French border in Geneva, there sits a humongous 27km-long machine that dissects "invisible" protons, buried some 100m underground. It may seem like something out of a sci-fi film, but it's very real, and each day some 10,000 physicists and engineers head to this underground facility to run it in shifts 24 hours a day. And the reason this facility exists, is simply because of the fact that we do.

This massive facility called CERN (European Organisation for Nuclear Research) houses the 27km-long circular particle accelerator called the Large Hadron Collider (LHC), which was basically built to explore fundamental questions about our universe, feeding the human curiosity about life. But it's not quite like a Wizard of Oz­-type machine with a philosopher-type being that gives you the answers you need to hear. No, the LHC studies and experiments with particles - or to put it simply, smashes them into each other - to help gain a better understanding of the universe... sort of like cracking open an egg to get to what's inside. 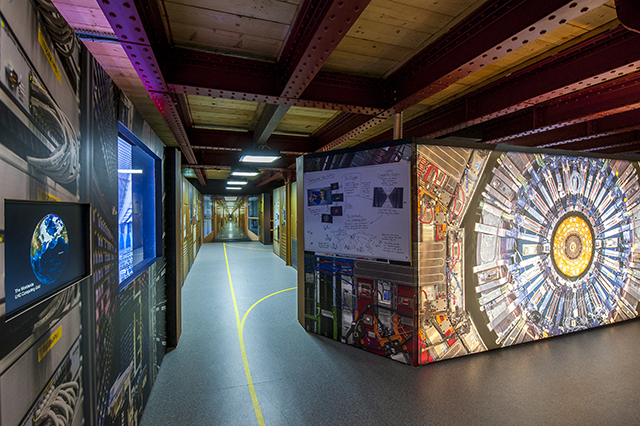 While experimental particle physics may sound like an incredibly science-heavy subject that is difficult for the layman to comprehend, some scientists and artists deliberate that it isn't necessarily all about just following the so-called rules. And it's at the Collider: The World's Greatest Experiment exhibition at the ArtScience Museum at Marina Bay Sands, Singapore that you would realise that the line between the two is very, very thin, if not, they are almost one and the same. An exhibition that draws you into the world and the workings of CERN and the LHC, Collider presents an engaging experience mixed with multimedia finesse, realistic CERN facility backdrops, and a particularly artistic inclination towards presenting complex ideas.

"I'm not sure if there's such a distinction between science and art, in terms of process," Dr Harry Cliff, particle physicist at the University of Cambridge and co-curator of Collider explained. "When you're trying to solve a difficult problem in science, sometimes there isn't a logical chain that you go through in order to solve it. So you get to a point, you get stuck, and then something happens and you have this intuitive lead and then you reach an answer. It's actually a kind of creative leap that happens, which I don't think is very different from what artists do." 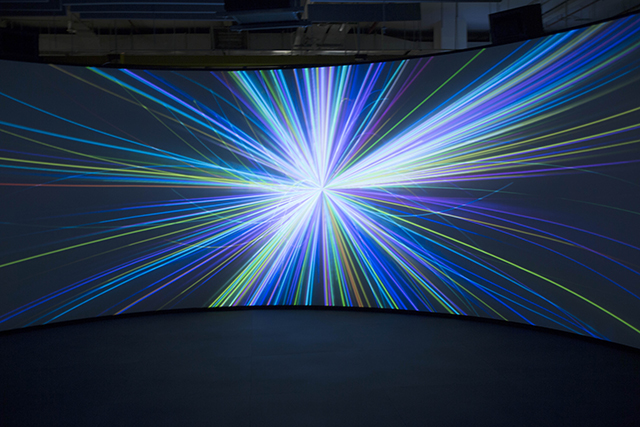 Collider reconstructs the inner workings of CERN and the LHC, giving you an idea of what it's like to walk through the facility. With plenty of illustrative infographics, virtual scientists and engineers, workbenches, and artefacts from the LHC, Collider emerges as a way to present a subatomic understanding of our universe to a mass audience. Also, deconstructing the discussion into pure audio and visual representations are two installations within the exhibition: Collision, a 270degree projection that graphically illustrates the process from detector engineering to beam collision and the global distribution of data; and The Gift of Mass, an artistic interpretation of the discovery of the Higgs boson particle.

The 2012 discovery of the legendary Higgs boson at CERN, of course, is an integral part of the exhibition. Dubbed the "God Particle," the Higgs boson - a significant particle predicted by Peter Higgs some 50 years ago - is plainly described as a particle that gives mass to other particles. The LHC takes credit in discovering this missing piece of the puzzle. Thus, presenting Collider to a mass audience was a no-brainer for Dr Cliff. 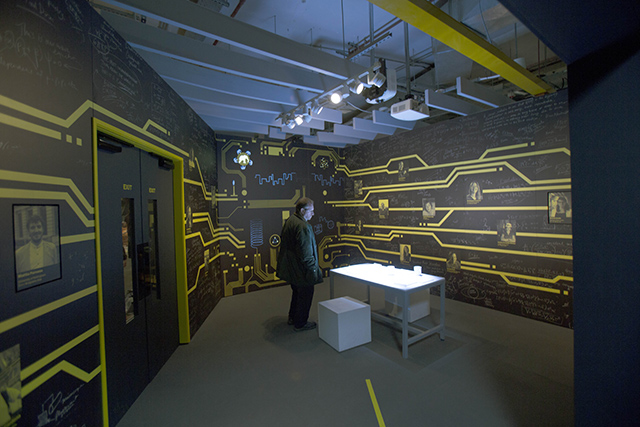 Dr Cliff added, "I think sometimes a part of it is like we're collecting new particles as flowers and then just categorising them. Particles themselves are not very interesting. We're not interested in particles; we're interested in the laws of nature. So the reason why we study particles is because they form a pattern and from that pattern you can actually develop an understanding on what are the rules that make the universe." 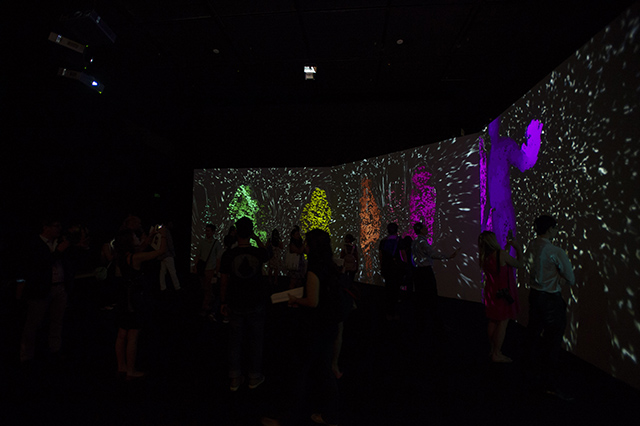 Presenting the pride and joy of the CERN's discovery of the Higgs particle, Gift of Mass takes on a seemingly deconstructed, artistic representation of the Higgs mechanism. An interactive art installation birthed from the Italian Institute for Nuclear Physics (INFN) in collaboration with artist Paolo Scoppola of the embrio.net collective, Gift of Mass integrates its audience into an audio-visual work of art that illustrates the concept of the Higgs boson.

Enabling the audience to experiment with how mass is acquired when a particle interacts with the Higgs field, Gift of Mass starts out as a black screen with buzzing "particles." As a person approaches this screen, the particles will begin to "dance" around the person's silhouette, eventually forming that person's figure on the screen in an array of colours. Through this interaction, a sort of musical symphony is also created, depending on peoples' movements in front of the screen. 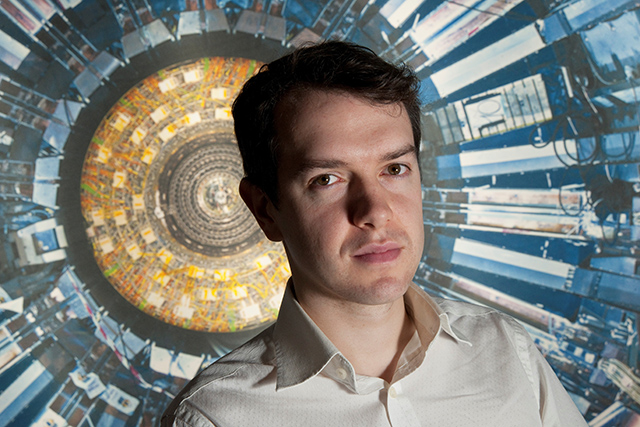 "I think what Paolo has presented is very important actually, because one of the problems we generally have in communicating stuff like quantum mechanics is how you visualise it," Dr Cliff said, adding that upon seeing Gift of Mass for the first time, he simply thought that it looked really cool. He added, "There's no real way of actually describing what's going on in this world, because it's a completely different realm. It doesn't obey the kind of usual rules that we see around us in our everyday lives. So everything we do is kind of a metaphor or a representation of it. We talk about how there's no formal explanation about the Higgs; an explanation by Margaret Thatcher went something like, the Higgs is like a room full of people, and when someone famous walks into it they kind of crowd around them and give them mass."

As for the artist Scoppola, producing Gift of Mass had plenty to do with his work in computer science - coding and translating INFN's concept - rather than just its audio and visual value. And to top it off, the audience plays a big part in it. "Most of what my challenge was, was to understand how people would interact in front of the screen," Scoppola said. "I always thought that the video interaction in the installation is not all about the code, not about the screen, but the experience. So the installation is not finished if there are no people inside. To me, I finished this installation when I saw people interacting with the screen, because what you see on the screen depends on what people do. It's not like a painting; I didn't have the sound until now, so for the first time here, I heard people playing music with it."

Scoppola added that he wanted to present the complex concept of the Higgs mechanism with the use of human emotion. "My dad who was a psychotherapist taught me that the first part of the brain that is formed before birth, is the part for emotion," Scoppola explained. "So you will never learn something without having an emotion linked to it. I think this is the rule of art in this kind of production: to produce an emotion inside a person so that you can connect the data to their brain. Maybe children will never understand the Higgs boson - I don't understand what is the Higgs boson - but maybe if children today enjoy the colourful shapes and the sound and remember Higgs, maybe they will decide to become scientists one day, just because they were fascinated." 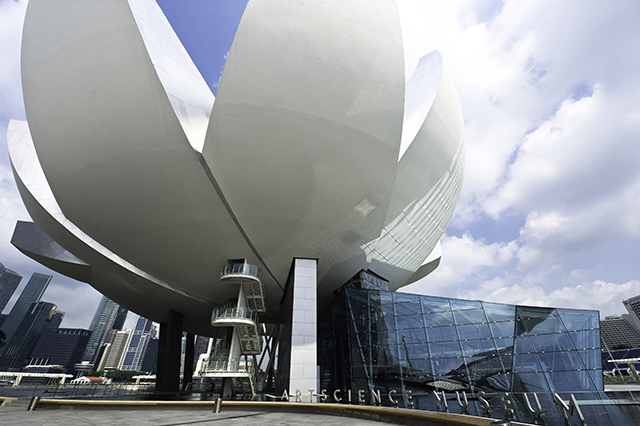 "Collider: The World's Greatest Experiment" will run until 14 February 2016 at the ArtScience Museum at Marina Bay Sands, Singapore. Head here for more information.