His Dark Materials: James McAvoy and Lin-Manuel Miranda tell us more about their roles and experiences in the hit series

Have you seen His Dark Materials yet? Even if you haven’t, you might have heard of the television series. The HBO Original programme is one of the top five most watched series on its streaming platform, HBO Go, since its debut in November 2019. His Dark Materials is adapted from Philip Pullman’s trilogy of the same name and features a cast that includes Dafne Keen, Ruth Wilson, James McAvoy, Lin-Manuel Miranda, Clarke Peters, and Anne-Marie Duff. The finale of the fantasy drama happened on Christmas Eve (24 December 2019)—on HBO Go and HBO (Astro Channel 411 and 431 HD).

If you’d like more information and to understand His Dark Materials with more depth, here’s what James McAvoy and Lin-Manuel Miranda had to say: 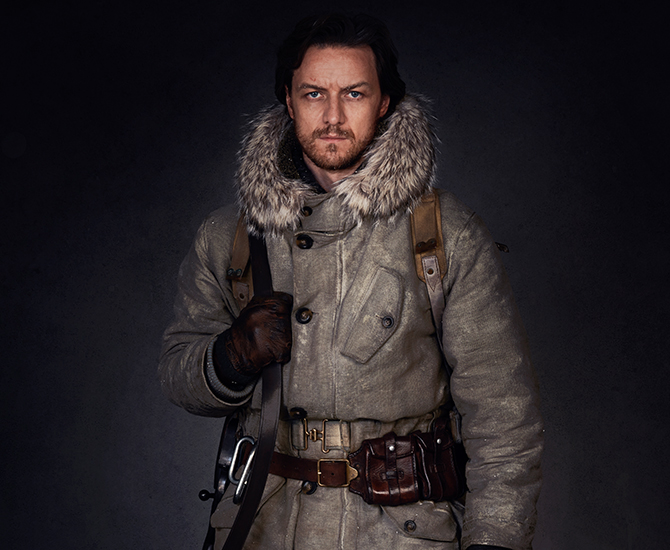 Lord Asriel Belacqua was a high-flying nobleman in his youth, but he made a pretty big mistake with shall we say “another cast member” and because of that, both she and he suffer huge consequences. My life was very much changed and by the time I become the 40-year-old person that I am now, I’ve become quite hateful and doubtful of organised religion—their doctrines, beliefs, and their motives. I spend a good 13 years trying to get to the heart of what I believe, trying to bring them (the Magisterium) down really. I’ve been trying to determine what spiritualism really is and how it’s been perverted in our world by organised religion.

I am also the closest living relative to Lyra Belacqua. I’ve placed her in the stewardship of the scholars of Jordan College and said to them, “Keep her safe,” because she won’t be safe with me. So, I leave her with them to have a life of running about being a skinny ragamuffin. I come back and visit her periodically and bestow upon her gifts every now and again and wild stories of the frozen North and armoured bears and witches and all sorts.

2. What kind of fantasy world is His Dark Materials set in?

It’s not as “lore-heavy” as Lord of the Rings. Don’t get me wrong, I love Lord of the Rings and I love the lore, but this is not as dependent on that. I think it’s more spiritual. It’s more of a clear argument, what’s going on. Don’t get me wrong, Harry Potter’s world was very clear, but our world is less whimsical than that. Philip Pullman is such a brave and fearless storyteller that he knows, no matter how crazy things get and how wild his imagination makes the story go, he’s a good enough storyteller that the audience are going to want to follow Lyra, and they’re going to want to follow Roger, and they’re going to want to follow Will along that journey to discover what is going on and why we’re all acting so terrified and afraid, when really, we should just all be happy to be alive. When she’s on this journey to figure out what Dust is, figure out what the Magisterium is, discover what the authority is, and take control for herself—that through line is so strong that it drives you onwards as a reader and hopefully as a viewer. 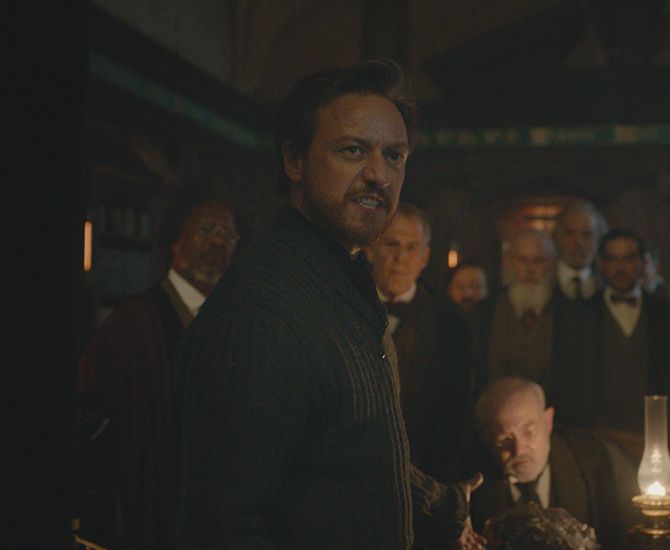 3. Who is Lord Asriel’s dæmon and what does it say about him?

She’s called Stelmaria and is a snow leopard. Stelmaria is at home on the edge, hanging on to a cliffside, climbing, and aspiring, and trying to get to the summit, and trying to conquer that summit, and trying to conquer her prey, if you like. Asriel, as his dæmon suggests, is hunting for something. We don’t really know what he’s hunting for at the beginning, but you find out in no uncertain terms what he’s hunting for in the end and his ambition is incredible. The audacity of what he’s planning on doing in seasons two and three, it’s unthinkable, really. But again, his ego is his solitude and his ego I think is also encapsulated in Stelmaria.

4. What do you think Jack Thorne has managed to achieve in compressing such a vast novel in to these eight scripts?

The scripts are really, really good. I think Philip is quite a mysterious writer in a lot of ways which is one of his great strengths for me. He’s a master storyteller but he doesn’t dole out information in a linear or didactic fashion so you’re never quite sure where you are with him. That’s exciting as a reader but it makes it difficult in a much more passive form of entertainment like television or film where you only get to see what we show you. You don’t have time to let your imagination ruminate or sentences really roll around in your mouth and in your mind. You’re onto the next thing. If you don’t keep up, you’ve lost it. It does present, I think, difficulties just in narrative but Jack is a superb writer and I think you’ll see that he’s up to the challenge. 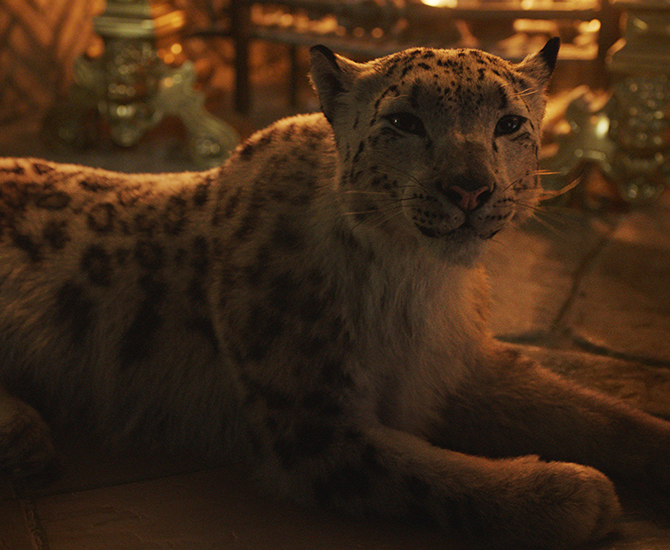 5. If you could have a dæmon in real life, what would it be and what would you call her?

I think it’d be something mountainy. Maybe a nice mountain fox. Actually, I don’t know if you get mountain foxes; you probably do somewhere in the world. Anyway, I’d call it Athena. 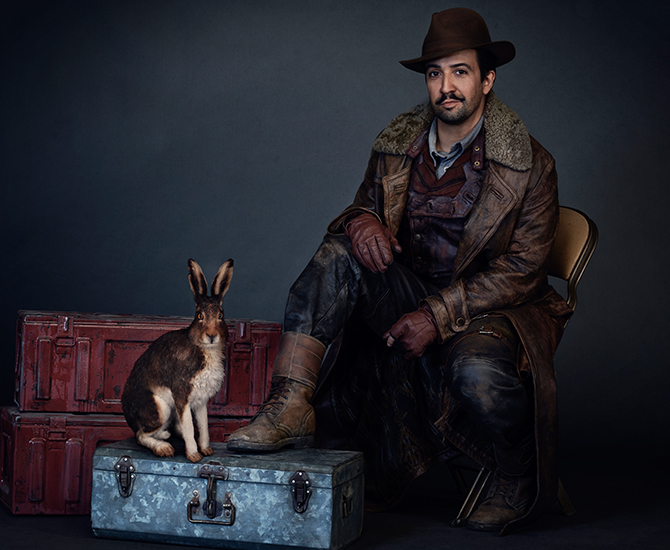 Lee Scoresby is a Texan aeronaut, which means he flies in a hot air balloon in Lyra’s world. It is interesting. When we first meet Lee, he’s a bit of a non-sequitur. We are suddenly in an air balloon flying above these mountains but we soon learn that he is a close friend of Iorek Byrnison, the armoured bear who is without his armour. He joins Lyra in her quest up north to find the missing children and to see Dust.

I would say he’s a good guy and a rascal at the same time. He’s not above picking a pocket, he’s not above doing bad things to achieve good ends: he’s a cowboy. But a cowboy very much in the Gary Cooper High Noon mould. He’s got this incredibly decent heart even though he drinks and he gambles and he fights and he’s got a gun—but he also uses all those powers for good.

3. Why did you want to be a part of this adaptation of His Dark Materials?

I was working on Mary Poppins Returns in London when Jane Tranter and Jack Thorne invited me to dinner. I am huge fans of each of their work, independent of each other, from Doctor Who to the Harry Potter play, which I thought was an incredible piece of work. So I said yes to that dinner. Then, I was gobsmacked when they told me, one, what they were doing and the scale of the ambition behind adapting this project. It’s what—as any Philip Pullman fan will tell you—this material deserves. The worlds are so rich. Then, when they told me they had me in mind for Lee Scoresby I said, “Yes,” at dinner. There was no thinking about it. I first read those books when my wife and I started dating. It was within that courtship period where you start reading things together, and there are certain shared things that stay with you. This is a very beloved series that my wife and I have re-read many times. I got home from dinner barely able to believe what we had just talked about. “I’m going to be him,” I thought. It was a real thrill. 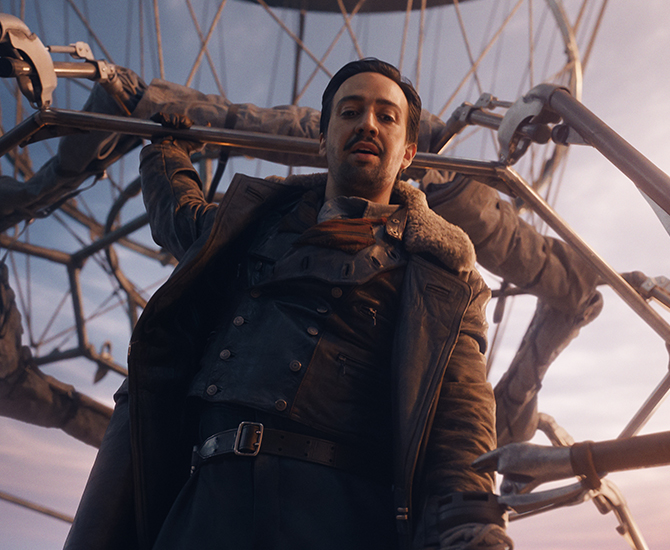 4. Of all the characters, Lee Scoresby must be the most fun to play…

Let me put it this way, my first day of filming, I did a musical number on a hot air balloon with a rabbit. My second day of filming, I got into a bar fight and had a stool broken over my back while I picked pockets and got thrown out of the bar like the classic western bar-room brawl. My third day, I talked to an armoured bear. Those were the first three days of work. It’s like every day has been an actor’s dream—from the way in which we interact with our dæmons and the incredible puppet work and CGI work that is going to be happening with this production to the incredible dream team cast of actors we have. From Dafne, who is so preternaturally grounded as a young actor, to James McAvoy to Ruth Wilson, all the way down the line.

5. What has it been like acting with a dæmon or with a giant bear?

We had these incredible puppeteers on-set. They’re basically a stand-in. I have a lovely young actress named Ruby who’s been voicing Hester (Lee’s dæmon) and does the dialogue with me, so I’ve got two people playing Hester. Basically, in every take, we’ll do a couple of puppet passes so we understand where the dæmon is within the space and how we do or don’t interact with them. You do a puppet pass and then you’ll do a version where it’s the same deal but you know where your eyeline is and you know who you’re talking to and so you get the muscle memory of where they’d be before you do a take without them in it. It’s important to get it right; Lee Scoresby spends so much time alone in his hot air balloon. He talks to his dæmon like crazy lonely people who are by themselves talk to themselves. It’s totally Han Solo and Chewy. He just keeps his own council.

I don’t know an actor alive who didn’t spend most of their childhoods talking to themselves. It’s really just playing pretend in the true sense. The reason we got into this is it’s calling on your imagination to do the rest of the work. 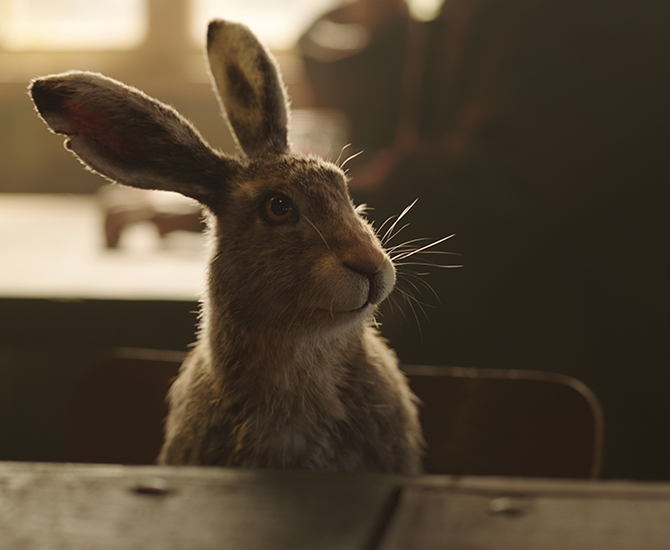 7. What would your dæmon be if you had one in real life? 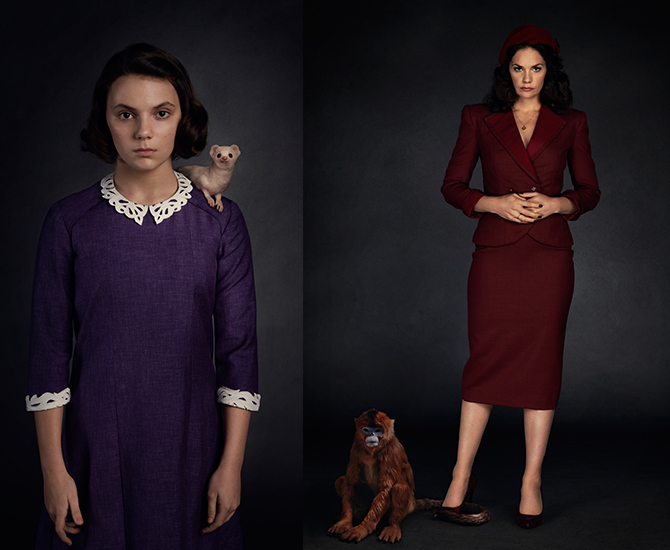 If you’ve seen His Dark Materials, what are your thoughts? If you haven’t, hopefully this might persuade you to give the television show a go. Whether you would like to begin watch or re-watch, you can stream all the episodes on HBO Go.