‘Dr Strange in the Multiverse of Madness’: What to expect and who’s who in Marvel’s upcoming movie 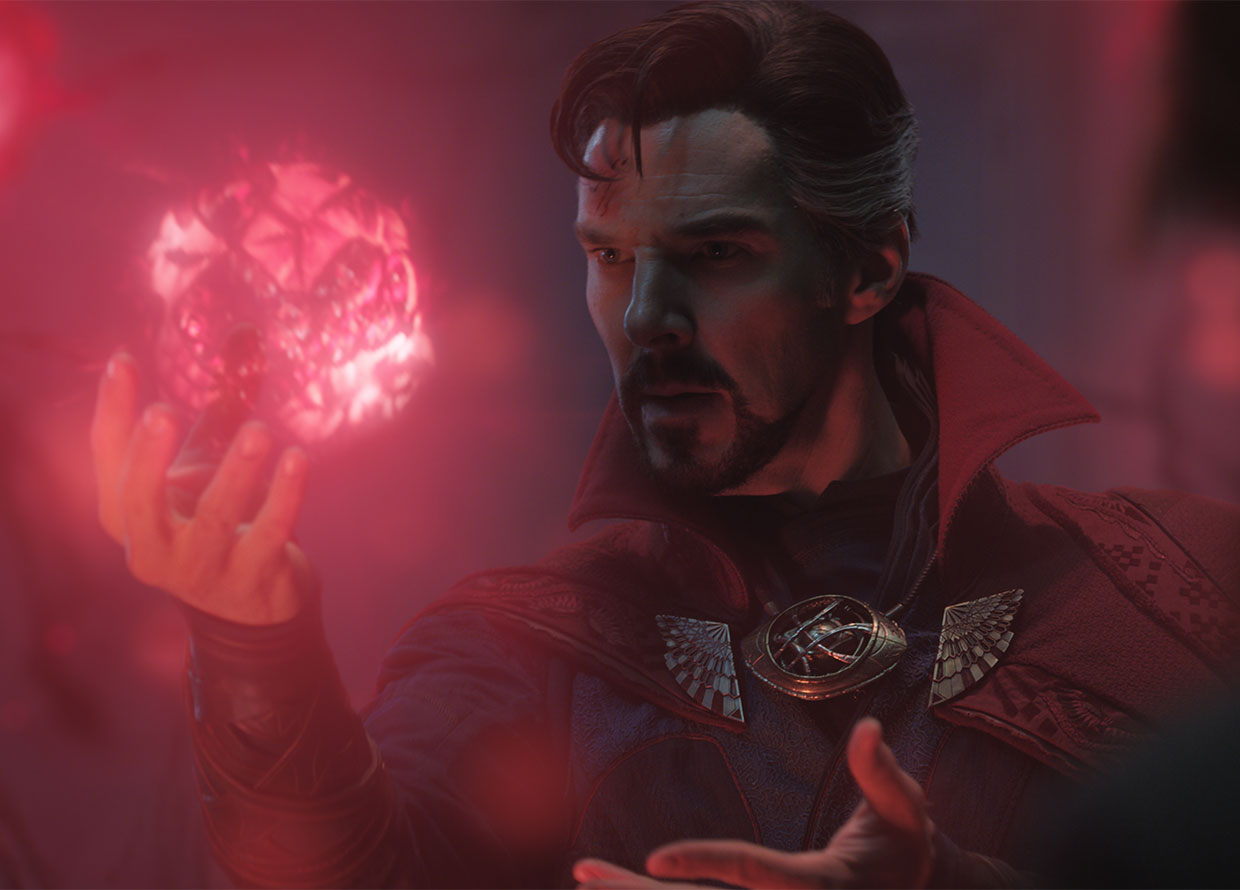 The second official trailer for Marvel’s upcoming blockbuster, Dr Strange in the Multiverse of Madness, is here and there’s *so* much to unpack. Picking up after the spectacular and shocking events of Spider-Man: No Way Home, the movie is expected to fully unveil the Marvel Multiverse and the catastrophic, action-packed events following Dr Strange’s botched spell in No Way Home.

Have you seen the new trailer? Here, we’ll discuss some of the exciting things we spotted—and what they could possibly mean for the movie.

A brief recap on what happened in ‘Spider-Man: No Way Home’

In No Way Home, a desperate Peter Parker (Tom Holland) requests the help of Benedict Cumberbatch’s Doctor Strange when he and his friends are rejected from their dream university, in the wake of his identity as Spider-man being revealed to the public by Mysterio. Peter asks for Strange to make it so that the public would forget that he’s Spider-Man, allowing him to return to how things were before. However, without the Time Stone, Strange suggests they use the Runes of Kof-Kol spell to fulfil Peter’s wish and, despite Wong’s warnings against it, proceeds to attempt the spell. Due to Peter’s indecisiveness while Strange is casting it, the spell becomes corrupted and almost rips apart the seams of reality.

While Strange is successful at containing the spell, the rifts that were temporarily opened between the various dimensions in the Multiverse allowed Spider-Man’s foes from other realities to travel into their realm, where they wreaked havoc on New York. During the movie’s final battle, the Machina de Kadevus—the green-ish cube that Strange uses to contain the spell—is broken. With the rogue spell on the loose and threatening to open up portals that will inevitably bring in countless other enemies, Peter offers a solution to Strange: casting a final layer of the spell, this time with everyone forgetting who he is.

Without any time to strategise a better plan that’ll work, the spell is cast, sealing the stamp on Peter’s huge sacrifice. Although a multidimensional catastrophe was dodged, the closing scene sees Peter return to his superhero duties without his loved ones by his side, as even they have forgotten who he is.

In the new trailer for Doctor Strange in the Multiverse of Madness, we get our first look at the MCU rendition of America Chavez (played by Xochitl Gomez), one of the Young Avengers from the Marvel comics. Distinguishable by the denim jacket with a star on its back that she’s seen wearing consistently, America Chavez’s MCU debut will undoubtedly push the young superhero to dangerous limits, but not without displaying her incredible powers. The trailer shows MCU’s newest superhero using her distinct star-shaped portals while restrained by what seems to be a multiversal monster, and her constant close proximity to Strange throughout the trailer’s many adrenaline-inducing scenes foretell a significant role for her to play in the movie’s plot.

It’s still unsure if her origin story will be changed to better fit her introduction to the MCU, but one thing we can say for sure is that Chavez will have many opportunities to wow Marvel fans with her super-strength, speed, durability, and of course, her interdimensional travelling abilities, potentially setting her up to be a primary character throughout the rest of Phase Four of the MCU.

Another character fans were ecstatic to see in the trailers released so far is none other than Wanda Maximoff, who Strange supposedly goes to for help with understanding the Multiverse. The events of the new movie will occur after that of the hit 2021 miniseries, WandaVision.

In case you haven’t seen WandaVision (we highly suggest you do), the Disney+ miniseries essentially saw Wanda go through the multiple stages of grief after losing Vision for a second time in Avengers: Endgame. Whilst grieving her loss by the house in Westview, NJ, where she and Vision had hoped to grow old together, she unknowingly unleashes a wave of red chaos magic upon the town, transforming it into the peaceful suburbs from the sitcoms she grew up loving. Wanda and Vision (or at least a version of him created through Wanda’s magic) start living a happy, suburban life but soon realise that their mundane life is not as it seems. As the episodes progress and Wanda’s spell is picked apart over time, she’s transformed from a cute ’50s housewife into a solemn but still traumatised woman in the 21st century, which is where Strange finds her in the new movie.

What seems most interesting is that in the new trailer, Wanda is shown expressing her displeasure at how Strange is allowed to mess with reality and “break the rules”, yet still be hailed as a hero despite the many disasters he has created as a result, while she was deemed a villain when she broke the rules and disrupted the reality of Westview and its inhabitants with her spell. While we do expect to see Wanda lend a hand to Strange, her seemingly bitter sentiment could mean that she won’t necessarily be a supportive aide to Strange, and even an adversary at some point of the movie—whatever it is, we’re dying to find out!

In the first movie trailer shown at the end of Spider-Man: No Way Home, fans were treated to a shocking sneak peek of a dark, sinister Doctor Strange, which some think may be Strange Supreme, an evil version of Doctor Strange from Marvel’s animated What If…? series. While we don’t know if this is the exact same variant of the sorcerer from What If…? and if he’ll be a foe or an ally (as the Strange Supreme in What If…? redeems himself in the series’ finale), it’ll be interesting to see how Strange interacts with this version of himself. It’s unlikely that an evil Strange will be a very significant threat in the movie, however, as the film’s premise and trailer seem to promise a much greater adversary.

Another unsavoury looking character glimpsed towards the end of the second trailer is what some are speculating to be a zombified variant of Doctor Strange. The possible variant looks to be conjuring creepy dementor-esque ghouls; these seem to be melded to or empowered by the variant. Another theory fans have of this scary creature is that it’s not a Doctor Strange variant but Nightmare—if this is true and Marvel is plucking the villain straight from the comics, he likely will be posing a great danger to Strange and his team.

The trailer also features a quick glimpse of what has to be Defender Strange, yet another multiversal variant of Doctor Strange. The key differences of this variant are the white stripes in his hair and his different costume. With so many new and powerful enemies, we have fingers crossed that this variant will turn out to be a much-needed ally.

Among other things to be excited about are:

While we don’t get a proper look if it is truly Professor Charles Xavier aka Professor X, we do hear what is unmistakably Patrick Stewart’s voice in the trailer. With hints in the trailer of the MCU debut of the Illuminati, a group of highly powerful superheroes who are focused on preventing multiversal dilemmas from happening, it makes it all the more likely that Patrick Stewart could be entering the MCU to reprise his role as the founder of the X-Men. However, without a clear look at who Stewart is playing, the actor’s return to Marvel may be as a new character entirely.

The new Dr Strange movie is said to be Marvel’s very first journey into the realm of horror. Looking at some of the beginning clips from the trailer where Strange is talking about a recurring nightmare he’s been having, and the scene where he’s standing on a ground littered with skeletons before a decrepit Sanctum Sanctorum, the film definitely seems to be promising much creepier and darker themes compared to previous movies. This will be exciting to see unfold, as there aren’t many examples of crossovers between the horror and superhero genres, the closest probably being Ghost Rider and to an extent, Venom. Regardless, with director Sam Raimi behind the camera (yes, Spider-Man’s Sam Raimi), fans can rest assured that the sophomore Doctor Strange film will be amazing no matter its genre.

Played by Rachel McAdams, Dr Christine Palmer will also be in the new film. However, the questions of her role and how it will connect to Doctor Strange’s missions in the movie are currently up in the air. In a scene that seems to occur early in the movie, Christine Palmer is seen at her own wedding—and Strange is not the groom. As Stephen Strange’s love interest in the superhero’s previous film, fans are theorising that Christine Palmer moved on during Strange’s five-year absence after Thanos’ Snap. Her appearance has fans wondering how she’ll be involved in this movie’s arc, as well as how her relationship with Strange has evolved since his resurrection.

Another character from the comics that seems to be making a first on-screen appearance is the Minotaur-like Rintrah, who is seen with the Masters of the Mystic Arts at the temple-like Kamar-Taj as a dark, ominous smoke cloud descends on them. Marvel fans who know the comics well will know that Rintrah is a supporting character in the comics, and once served as an apprentice to Strange. His significance to the plot of the new movie is unknown, but his inclusion is a detailed touch from Marvel nonetheless.

Dr Strange in shackles and Ultron?!

Messing with reality is apparently a multidimensional crime and for his corrupted spell, Dr Strange is apprehended and seemingly brought to trial. While cuffed, he’s also seen being flanked by metallic drones that look extremely similar to Ultron. It’s probable that these are actually Tony Stark’s Iron Legion Drones, uncorrupted by Ultron. While some fans are hoping that this could spell the return of Iron Man, it is intriguing to see the late tech genius’ inventions and influence exceed his physical lifespan.

A glowing figure is also seen in the trailer, suspiciously alike to the form of Captain Marvel aka Carol Danvers (Brie Larson). However, it’s believed that this is actually Monica Rambeau in a Captain Marvel variant getup, and the clip we see of the glowing figure fighting Wanda makes the theory all the more convincing. There are various other assumptions of who this could be, from the Human Torch (with an open multiverse, anything is possible) or even Monica’s mother, Maria Rambeau (once again, anything is possible), but due to Wanda and Monica’s tense history in WandaVision, we’re banking on it being her.