His most memorable work is perhaps his role as the bumbling lothario, Latrell Spencer in White Chicks. Since then, Terry Crews has taken up many roles and he even clinched the title of 'Sexiest Man Alive' by People magazine. There was no doubt that Terry Crews is one talented individual. Now he can also lay claim to being a furniture designer and a really good one at that.

"I call myself a unicorn," he said in an interview on LA Times. "I'm the biggest unicorn in Hollywood." 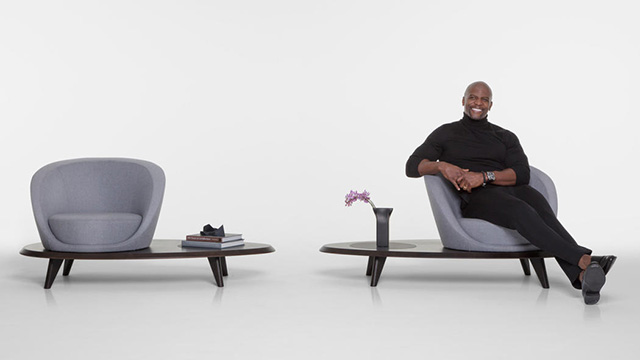 The NFL player-turned-actor estimates that this would be his seventh career and his design work is for New York-based Bernhardt Design. The Terry Crews Collection debuted at the International Contemporary Furniture Fair and represents a lifetime of passion. Terry had learned graphic design in college, where long before becoming an actor he dreamed of designing movie posters.

The Terry Crews Collection draws inspiration from ancient Egyptian hieroglyphics where the design plays on organic forms like lily pads and the smooth stones of the Nile River. His collaboration with Bernhardt Design is part of the brand's initiative to work with non-designers. Previous collaborations include Airbnb founder Joe Gebbia and musician Tift Merrill.