What the Notre-Dame could look like in five years

Two days after the tragic fire that swept Notre-Dame, French Prime Minister Édouard Philippe said that there would be an international competition for a new spire to replace the iconic structure designed by Eugène Viollet-le-Duc that was destroyed. No official details of the proposed contest have been announced yet, but that didn't stop a flurry of designers from putting forward their ideas for the project. Since the French MPs have just approved a law that concurs with President Emmanuel Macron's aim of rebuilding the cathedral in five years, it seems it won't be long before the restoration is set in motion.

From a rooftop greenhouse to a public pool with unmatched views over Paris, these are some of the most eye-catching proposals to surface so far:

From the mind of Paris-based architect Vincent Callebaut comes forth a vision to bring science, art and spirituality together. Titled 'Palingenesis', which means "rebirth" or "regeneration" in Greek, his design aims to harmonise the cathedral's nave, roof and spire in a single gesture. Made of glass, oak and carbon fibre, the building's triangular section and steep 55-degree pitched roofs gradually stretch to form a vertical spire, all while respecting the original geometry of the 10-metre-high attic. This new Notre-Dame will be a positive energy building that produces more energy than it consumes via the technology of passive systems and advanced renewable energies. 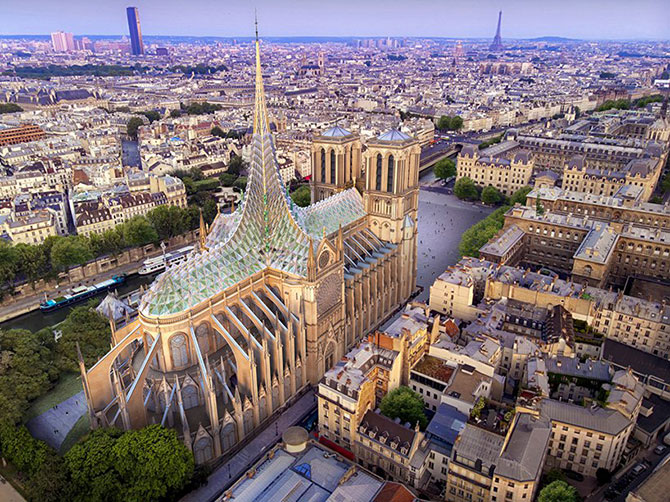 Studio NAB, too, envisions a glass roof for the city icon, specifically in the form of a greenhouse. Looking to integrate environmental, educational and social aspects into the restructuring of the cathedral, the design proposal comprises of an educational greenhouse that spans the entire roof, with the new spire doubling as an apiary, housing multiple levels of beehives. "In reference to the hives that survived the fire and in order to reintroduce the 'living' in Paris, we could produce the famous 'nectar of the gods' in the heart of the new arrow became apiary," said the studio in its statement. 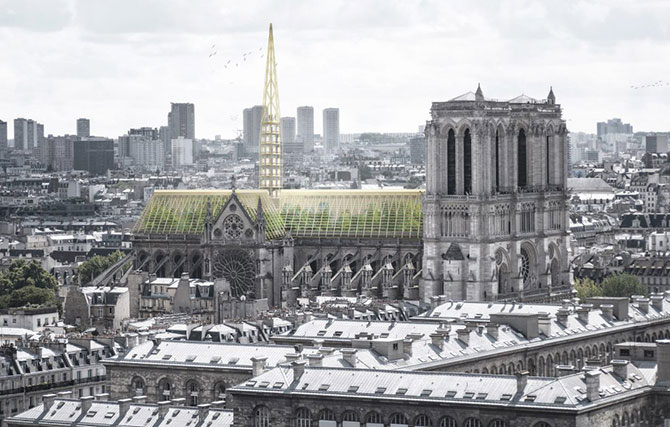 Taking inspiration from one of Notre-Dame's most famous features, the third glass rendition of the roof by São Paulo-based AJ6 Studio sees it reimagined in stained glass in its entirety, including the tower. The architecture studio's creative partner Alexandre Fantozzi explained: "In gothic there is the connection of the earth to the sky, and inside the cathedral, the natural illumination multiplies in colours through the filter of the cover in stained glass". It won't be just a magnificent sight by day, but also by night, as the roof gets illuminated from within the building. 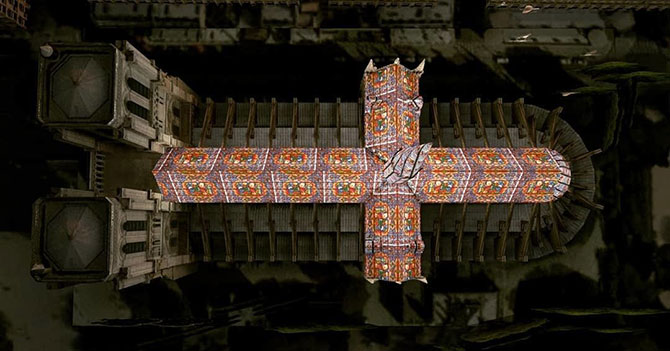 Dutch design firm Studio Drift's proposal highlights the importance of building  (or rebuilding) our world in more sustainable ways. Their design will enlist the help of non-profit organisation The Ocean Cleanup, using recycled ocean plastic in the reconstruction, removing tonnes of harmful waste from the ocean in the process. The collected plastic would be melted down and reformed into roof tiles that will reflect the sky above it, serving as an international symbol for upscale recycling. 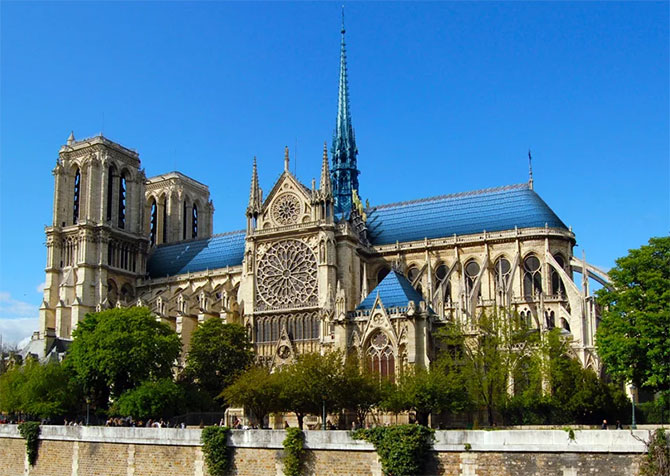 In a move against the idea of rebuilding a replica of the spire as it was done in the 19th century, French designer Mathieu Lehanneur proposed that the recent tragedy be immortalised in time, with a gleaming, 300-foot flame made of carbon fibre and covered in gold leaf to stand in place of the tower. The flame is a strong symbol in the bible as well. "I love this idea of a frozen moment in the history that can remains for centuries," Lehanneur told Dezeen. "For me, it's a way to capture the catastrophe and turn it into beauty, turning ephemeral into permanency." 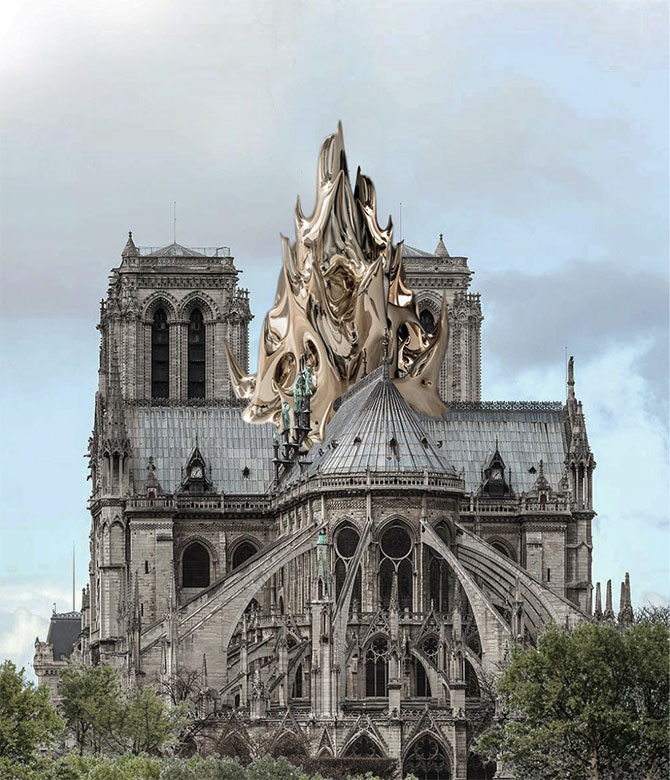 Going with a poetic approach, Slovakian design firm Vizum Atelier imagines a beam of light that will shoot up into the sky from the new spire; a lightweight crown that connects heaven with earth. According to Michal Kovac, an architect at the firm, it would be a "lighthouse for lost souls", while fulfilling the dreams of Gothic-era builders who wanted to touch heaven with their spires. 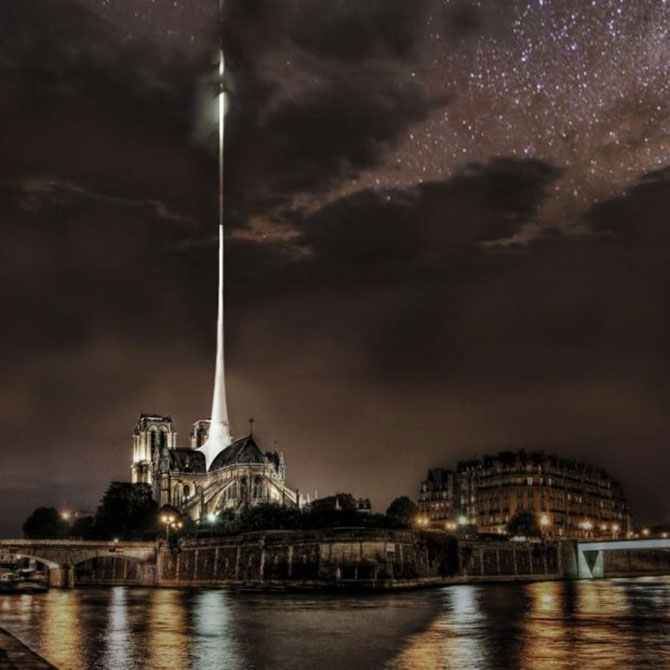 The only proposal on this list to forgo rebuilding the spire in any form, Ulf Mejergren Architects instead hopes to add a complementary spatial experience to the building by way of a large public pool on the roof, with the twelve statues of the apostles that escaped the fire surrounding it and serving as its guardians. A place for thinking and self-reflection, the rooftop will be a new meditative public space with one of the best views over Paris. 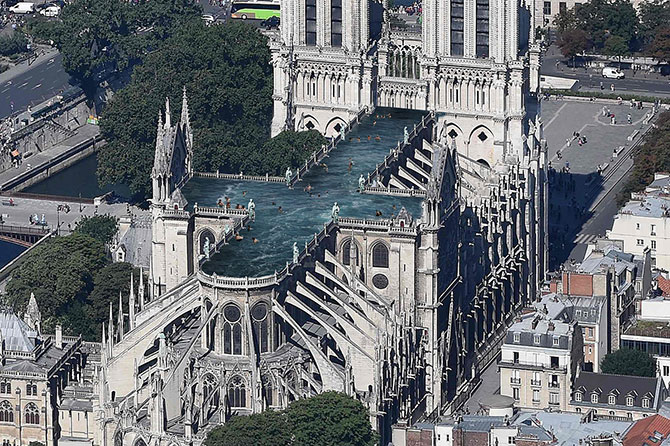 LVMH, Kering and L'Oreal pledge a total of €500 million to help rebuild the Notre-Dame cathedral