Producing groundbreaking works of art in his signature dream-like style, Hamir Soib is undoubtedly one of Malaysia's most important artists, writes Zena Khan

Hamir Soib feasts on the unconscious. Through the regular production of seminal paintings, such as Pillihan, Sepat O Sepat, Ahad, MashAllah, The Four Quls, Auctionland and Hot Seat, he has marked himself out as one of the most important artists of his generation. Exposing his uncensored inner thoughts in a decidedly surrealist style, Hamir infuses his paintings with a dream-like aura. The layers of skill, concept and paint involved in his aesthetic means the production of his works are limited. The intellectualism behind his creative practice, coupled with the rarity of his monolithic works, result in a portfolio of groundbreaking paintings that are a firm favorite with critics and collectors of contemporary Malaysian art alike.

Born on December 25th, 1969, Hamir grew up in Muar, Johor, before deciding to pursue a degree in Fine Art at UiTM. It was at university that he met Ahmad Fuad Osman, Ahmad Shukri Mohamed, Bayu Utomo Radjikin and Masnoor Ramli, with whom he formed the groundbreaking collective Matahati. Emerging at a time of rapid social and cultural development in Malaysia, the Matahati was at the forefront of local contemporary art, thanks to their individual fresh perspectives on art creation. While his time with the Matahati showed his desire to seek new ways of producing art, it was really Hamir's work as a backdrop painter for local theatre that exerted the largest influence on him during his youthful phase, setting him apart from his peers. 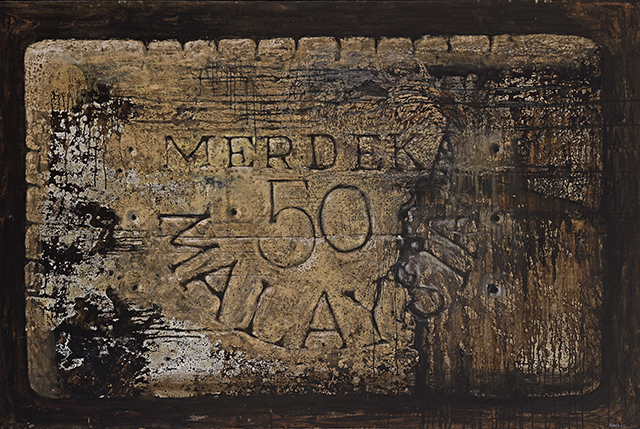 The painting of theatre scenery is an extremely formalistic practice antecedent to the Italian Renaissance, particularly in relation to the Rules of Perspective. The need for a backdrop to be intelligible to spectators who are sat a distance away from the stage necessitates an understanding of balance and scale. During his time as a backdrop painter Hamir was afforded the luxury of daily practice on large expansive surfaces. In order to create an immersive atmosphere for the audience he learnt to utilize an array of brushes and techniques. This unconventional formal grounding has had a clear impact on Hamir's skills and creativity. His 2005 solo exhibition, Pameran Tunggal, which was staged in 2005 to celebrate the founding of his studio, Gudang, demonstrated the effect of this training per a game changing series of titanic canvases.

An artist run space, Gudang was intended as both a personal studio for Hamir as well as a source of support for young artists as they began their creative journey. A converted warehouse, Gudang offered Hamir the freedom to set new standards within the local art industry. In the early 2000's Hamir noticed the majority of art being produced was in standard size formats, generally along the dimensions of a four-foot square canvas.  Bolstered by his experiences in set design he aimed to break down the accepted rules governing art production, beginning by pushing the size of paintings with the production of Pillihan.

Measuring an astounding 24 feet by 10 feet, Pillihan is considered one of his most important works, setting the tone technically and conceptually for his career. An array of detailed imagery fills the painting, from the man crouching down and grasping the roots of a tree as it shoots up to the top of the canvas, to the donkey crying out in fright as it explodes out of a volcanic eruption. Hamir demonstrated his skill in creating strongly layered narratives by composing a piece that mixed landscape and figurative art to deliver a powerful opinion on the money politics debates that were raging locally at that time. With Pillihan, he established both his technical credentials and his reputation as a socio-political commentator in one fell swoop.

Hamir's socio-political line of inquiry is a direct response to the changes he witnesses around him. Other seminal paintings of his such as, Sepat O Sepat and Auctionland have addressed multiple issues within a single canvas, revealing a deep understanding of the complex layers of rules governing society's development. The idea of layering is crucial to Hamir not only conceptually, but also technically. A characteristic he is well known for is developing and refining his techniques through a work, or series of works, and then coupling those techniques with new developments to push his art to new levels. In the beginning of his career he worked mainly with oil, but after the production of Sepat O Sepat, he searched for a medium that would allow him to infuse his works with a darker atmosphere, leading to his discovery of bitumen. A dark paint, in shades of brown, made from coal tar, bitumen allowed Hamir to create highly detailed, gothic imagery.

Upon satisfying his ability to use bitumen as effortlessly as oil and acrylic, Hamir began experimenting with it as a drawing tool. This coincided with a conceptual shift from social issues to personal ones, evidenced by a series of contemporary calligraphic works. The first of his major calligraphic paintings, Ahad, is seen as a testament to the artist's talent. In depicting various textures and materials through the use of a monochromatic palette and inflexible medium, Hamir demonstrates his painterly skills and establishes himself as the undisputed master of the bitumen genre. 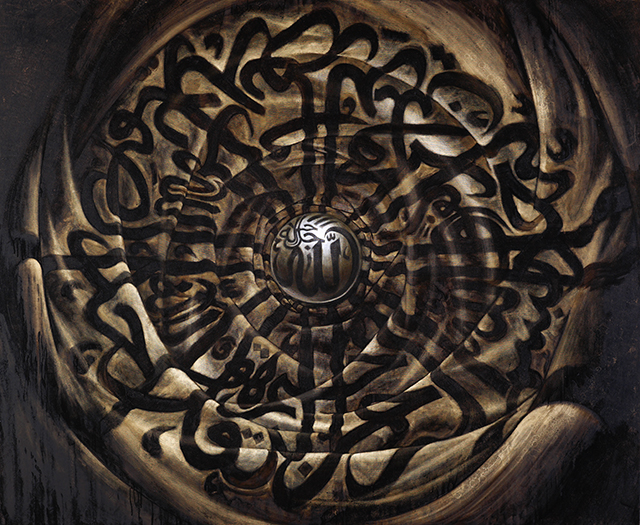 Hamir's talents have caught the attention of critics and collectors alike. In 2007 he was awarded the Sovereign Art Prize for his piece A Very Thin Line. Subsequently he caught the eye of luxury brand and art enthusiasts Louis Vuitton, and was invited to produce a painting that would go on to tour a selection of international Louis Vuitton stores. Hamir responded to the brief by creating a painting and concealing it in a Louis Vuitton box. Simply titled The Box, it delves into the idea of untold stories and unsung heroes, and examines the effort behind branding oneself creatively through the development of a signature style.

The Box conceptually segues neatly into a new work The Collection, which is due to be unveiled at Hamir's solo exhibition at Artcube Gallery in KL, in the fourth quarter of 2015. The anticipation surrounding this new body of works is palpable in the art industry, particularly given the rarity of solo exhibitions by Hamir. Indeed, his influence in the world of contemporary Malaysian art is unquestionable, and is especially evident through the emergence of monolithic, socio-political and calligraphic works amongst the younger generation of artists. Weaving hypnotic, surreal narratives, he easily captures his audience's attention, succeeding in his aim to generate reflection and analysis within society. As such, through his painting based practice he is widely credited as one of the great intellectuals of Malaysian society.