Where you should travel to in 2020, based on your Chinese Zodiac 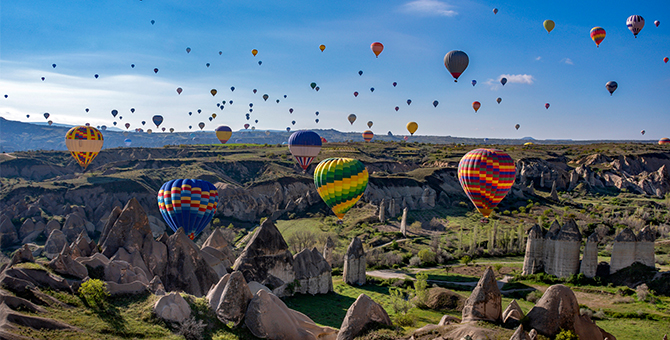 2020 has come into full swing now and we’re already getting itchy feet. Curious rat? Restless tiger? Courageous dragon? No matter your Chinese zodiac we have your travel plans covered. Take a look below to see what astrology has decreed for you:

Curious, easy-going, lovely pigs live life to the fullest! Being superb planners and having the innate ability to feel at home anywhere gives them the biggest reign on places to travel. What better place to travel to than the vast lands of the United States of America? Friendly people, varied landscapes and plenty of opportunity to connect with the culture of their surroundings, America is the natural choice. Being highly organised means that they can take on the world’s best road trip route no-problemo; the infamous Route 66.

Loyal, sweet and lovable are the words that come to mind with this zodiac. They prefer a quiet, tranquil getaway among familiar places and people. Vietnam is an incredible place for a Dog—not too far from home but so different in so many ways that the experience is still exciting and enriching. Plus, Vietnam is an ideal destination for a group of pals.

Brave, confident and maybe a little cocky, rooster signs are ambitious and adventurous. They are comfortable in unfamiliar places and take everything as an opportunity to learn. Morocco makes for a most interesting destination for the Rooster zodiac—there are ubiquitous bright and intricate decorations, there are plenty of places to learn about the history of the country as well as the vastly varied cultures and there are some of the most interesting staples of Islamic architecture within.

Mischievous, clever and curious, Monkeys should head to the Bahamas, the perfect playground. With rich nightlife, beautiful beaches and an array of historical attractions, there is plenty to do on the Caribbean Island. If you’re looking to do something a little more active, you could always go diving around world-class coral reefs and underwater caves.

Intelligent, social sheep are a natural partner to the outdoors. Travel to Canada to take in some of the freshest air in the world, basking in the varied nature of the Canadian outdoors. From the staggering Niagara Falls, to the hills of British Columbia, to the vast waters of Nunavut  (home to Beluga whales), to the star-studded skies of Jasper, there are plenty of natural wonders in Canada. And hey, if you get bored and crave a little bit of city life, there’s plenty of that too!

Charismatic and empathetic, Horses are social creatures. The notoriously friendly natives in Brazil are an energetic match to the Horse zodiac—a country full of bright carnivals like the pre-Lenten Carnival and delicious food to boot are the perfect setting to make new friends! In addition, the beautiful landscapes of the country like the notorious Amazon Rainforests and the iconic Iguaçu Falls, paired with the several UNESCO World Heritage Sites native to the country make it an incredible place to explore.

The bad rep for snakes is unwarranted (thanks, Harry Potter)—snakes are wise, intuitive, mysterious and artistic. They thrive on new experiences, enjoying tranquil getaways as well as the finer things in life. What better place for a Snake zodiac than France? Dine in luxury in Paris, bathe in the scent of lavender in Provence, learn a new language and immerse yourself in the history of the country.

Strong, courageous, powerful Dragons are the only mythical creature in the Chinese zodiac, and deserve an equally fairy-tale destination. They enjoy exploring so we’re sending them to the vast lands of their spiritual homeland: China. Centuries of impressive ancient heritage, a spectacular array of natural wonders, revered cuisine and giant pandas make China such a special place to visit.

A pensive zodiac, the Rabbit appreciates the finer things in life, immersing themselves in the culture wherever they end up. They are a compassionate, loving breed and find the romance in the little things. This makes Venice the spot to visit—full of classical art galleries and incredible historical architecture against an impossibly romantic backdrop of sunsets over the canals.

Passionate, adventurous and restless, Tiger zodiacs need excitement—and a lot of it. Not the most talented planners, tigers thrive in unconventional places that have lots of potential for side adventures. Japan is the perfect destination for a Tiger with bustling cities, delicious food, a rich history and immersive culture, a magnificent natural landscape to offset the busy cityscapes and efficient bullet trains to get you to and fro!

Organised, patient, reserved and tough, the Ox is the perfect suitor for a long road trip. Their appreciation for innate beauty and nature makes the North Coast 500 the ideal route to follow. Set along the north coast of Scotland, the route goes from Inverness, up to John O’ Groats, past Durness, Ullapool, Torridon and looping back to Inverness, it poses a perpetual landscape of staggering mountains and greenery against crystal clear lochs and white sand beaches against blue oceans. Spot the tartan, the world-class distilleries and the adorable Highland Cows!

Charismatic, resourceful, quick-witted and curious, those of the Rat Zodiac need a lot of variety to satiate their appetites for adventure. As the first animal in the zodiac, your sign represents new beginnings, so utilise your restless energy and itchy feet in New Zealand. The rich landscapes range from the green rainforests of the Southern Island, the snowy dreamscapes of the Southern Alps, the dreamy cityscapes of Auckland, the sun-soaked beaches of Coromandel to the tranquil geothermal Hot Springs of Rotorua. Hiking, swimming, climbing, exploring—it’s the perfect place for an adventure!