From the iPhone 14 lineup to the new Apple Watch Ultra and Series 8 to AirPods Pro 2, here is your quick guide to everything Apple just announced at their September 2022 keynote

Apple announced a slew of new devices and upgrades at its September 7 event, which is typically the keynote highlighting a new iPhone and Apple Watch. Well, there’s a little more than that this year as the tech giant announced a third variant for its Apple Watch range and the next generation of its popular AirPods Pro. We break down the gist of everything Apple announced at its Fall event below, along with pricing and availability in Malaysia. 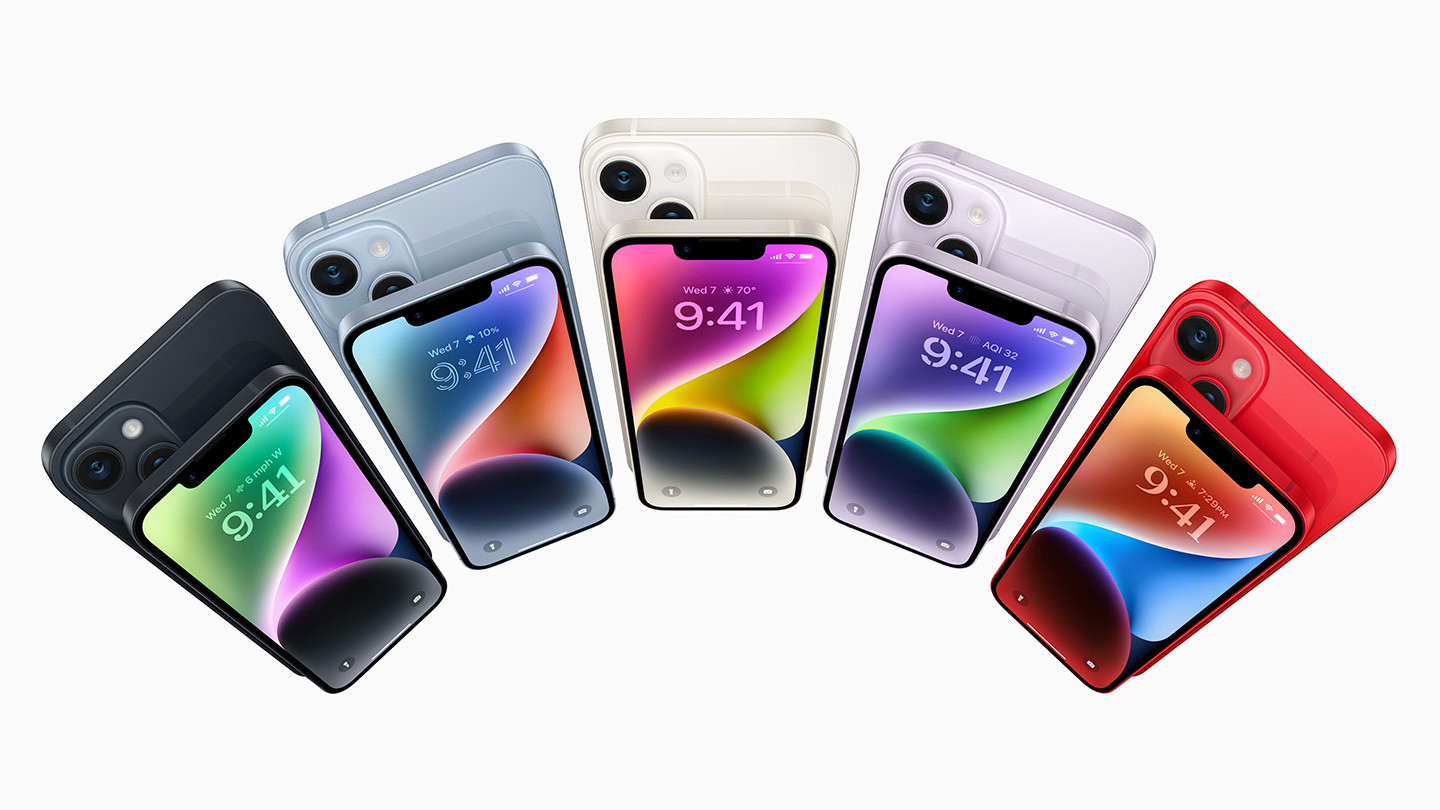 In traditional fashion, users can choose from two categories for the latest iPhone: the iPhone 14 and the iPhone 14 Pro models. The one difference is that Apple has done away with the mini edition and the lineup now starts with the iPhone 14 (6.1″) as the base model, followed by a larger iPhone 14 Plus (6.7″). At its heart is the powerful A15 Bionic chip with a 5-core GPU— similar to the one within the iPhone 13—and a body made of a tough Ceramic Shield front and aerospace-grade aluminium.

New to the entire iPhone 14 lineup is Photonic Engine, an enhanced image pipeline that dramatically improves low-light performance across all cameras to deliver immense detail and colour while preserving the texture. The iPhone 14 and iPhone 14 Plus maintain a 12MP dual-camera system (Main and Ultra Wide), except both lenses have been upgraded with a larger sensor and larger pixels. The same treatment has been extended to the new front TrueDepth camera, with an additional autofocus function so you can snap photos faster and clearer even under low light conditions.

When it comes to videography, many might appreciate the new Action Mode, which offers better stabilisation despite significant shakes, motion and vibrations. In addition, you can finally shoot Cinematic mode in 4K (at 24 fps and 30 fps). In terms of safety features, the entire iPhone 14 lineup introduces two key features: Crash Detection and Emergency SOS via satellite. The former can detect G-force measurements up to 256Gs—aka a severe car crash—and automatically connect you with emergency services. Emergency SOS via satellite sounds incredibly helpful, especially when you go camping or hiking off the grid and need assistance, and there’s no cellular or Wi-Fi connection. But, unfortunately, it will only be available to users in the US and Canada come November.

The iPhone 14 Pro models see three new firsts: an Always-On display (with no compromise on the battery life), a 48MP Main camera and Dynamic Island.

Also available in 6.1-inch and 6.7-inch sizes, the iPhone 14 Pro models are fitted with the new A16 Bionic, a stunning surgical-grade stainless steel body with a textured matte glass design, complemented by the tough Ceramic Shield front cover. The Always-On display is precisely what it sounds. You never have to tap on the screen to wake it and check the time or your schedule as the Lock Screen will display all that and your choice of widgets and Live Activities for maximum productivity. Enjoy it with the gorgeous and new Super Retina XDR display with ProMotion.

Say goodbye to the notch you saw in the iPhone 13 lineup and say hello to a new pill-shaped cutout in its place where the new Dynamic Island feature takes centre stage. Subtle and interactive, users can easily access and control ongoing background activities such as Music, Maps or timer without leaving the app they’re currently on. As for the pro camera system, Photonic Engine improves mid- to low-light performance across all cameras, including the new front TrueDepth camera. But the star of it is the first 48MP Main camera with a quad-pixel sensor, which enables a 2x Telephoto option on top of the 3x optical zoom. Professional (or even budding) photographers can also take advantage of shooting ProRAW in 48MP for amazing detail.

Like the iPhone 14 models, 4K in 24 fps and 30 fps have been enabled for Cinematic mode, along with the new Action mode. There’s also Crash Detection, 5G and eSIM support, as well as Emergency SOS via satellite. Apple is determined for the Apple Watch to be every user’s ultimate lifestyle and wellness companion. Adding to the current suite of safety and well-being features like ECG, Fall Detection, and cycle tracking comes wrist temperature sensing. With a two-sensor design—one on the back of the watch, touching the skin and the other just under the display—it will sample the wrist temperature every five seconds overnight (nighttime is the best indicator for overall body temperature). Users can then check their baseline temperature shifts in the Health app, and how they could potentially be caused by exercise, jet lag or an illness. The temperature sensors are especially a welcomed addition to women’s health as they can indicate ovulation estimates and provide improved period predictions.

Crash Detection is also available on the Apple Watch Series 8, along with a new Low Power Mode, extending the usual all-day 18-hour battery life to a whopping 36 hours by temporarily disabling selected sensors and features. This mode, however, will be made available to Series 4 and later with watchOS 9. Moving on to the new Apple Watch SE, users can expect all the basics one would need in a smartwatch, making it especially perfect for kids or new users. With the same powerful S8 SiP advanced dual-core processor in the Apple Watch Series 8, the new generation of Apple Watch SE is instantly 20 per cent faster than its predecessor. It also sports a screen that is 30 per cent larger than Series 3 and comes with Crash Detection, emergency SOS and workout/activity tracking.

Made for explorers and adventurers in mind, the Apple Watch Ultra and its 49mm titanium case and flat sapphire front crystal can endure the toughest of journeys. Essentially, it’s corrosion-resistant, withstanding even freezing temperatures of -20° C to blazing 55° C heat, provides edge impact protection, and offers a 36-hour battery life with a single charge. Or, with a new low-power setting, users can extend that up to 60 hours of battery life.

The Retina display powers up to 2,000 nits, making it 2x brighter than any Apple Watch display so far and the easiest to read despite the harshest sunlight. The Digital Crown is bigger, and there’s an additional orange Action button, which acts like a customisable shortcut button. Both work well even while wearing gloves. 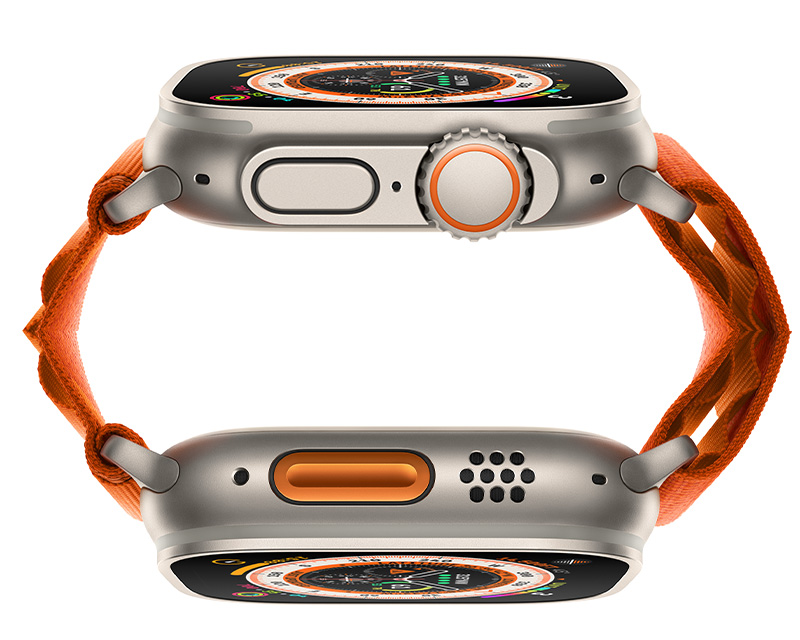 In addition, the Apple Watch Ultra has a second speaker and three built-in microphones to ensure significant sound quality in voice calls during any conditions—read: challenging, windy situations.

For athletes or those looking to push past their limits, the Apple Watch Ultra delivers the most accurate GPS of any Apple Watch to date as its precision dual-frequency GPS integrates both L1 and the latest L5 frequency, along with new positioning algorithms.

In accompaniment is the redesigned Compass app that reveals more in-depth information such as latitude, longitude, elevation, and incline, as well as an orienteering view showing Compass Waypoints and Backtrack. The former helps mark a location in the app—simply press the Action button for a quick drop of a waypoint—and with the Compass Waypoint complication, users will find its direction and approximate distance updated in real-time. Backtrack, on the other hand, will show the path via GPS data for users to retrace their steps should they lose their way. Finally, if all else fails, there’s an 86-decibel siren designed for emergencies that users can activate to draw attention to their location. And with the Wayfinder face, users can turn the interface red for better visibility in the dark. For underwater enthusiasts and adventurers, the Apple Watch Ultra is certified to WR100 as well as EN 13319 (an internationally recognised standard for dive accessories). In addition, the new Oceanic+ and Depth app can support scuba diving up to 40 metres and display time, current depth, water temperature, duration underwater, and max depth reached.

Pricing and availability for Apple Watch Ultra in Malaysia The second generation of AirPods Pro has been fitted with a new H2 chip, unlocking major upgrades to Active Noise Cancellation and Transparency mode, on top of an even more immersive Spatial Audio experience. It can cancel up to twice as much noise as the previous AirPods Pro, while Adaptive Transparency reduces loud environmental noise such as construction sounds for more comfortable listening. Plus, a new low-distortion audio driver and custom amplifier equate to richer bass and crystal-clear sound. Then, there’s Touch Control, allowing users to simply swipe up or down on the stem to make quick volume adjustments.

With iOS16, users can enjoy Personalised Spatial Audio by creating a profile using the iPhone’s TrueDepth camera. There’s also an extra small ear tip to ensure everyone gets the best fit possible. The newly designed charging case has a new built-in speaker to sound off louder for users to locate more easily. Although Precision Finding will give that a huge boost with its guided directions on a U1-enabled iPhone.

Pricing and availability for AirPods Pro 2 in Malaysia

For more info on everything Apple just announced, head to their website.