Batu Caves gets an Instagram-worthy makeover and here’s why If you’ve taken a photo of Batu Caves before — with its long, intimidating staircase and the breathtaking golden statue of Lord Murugan — you’ll probably need to take another one as the popular tourist attraction (also a religious site) recently received a colourful makeover. 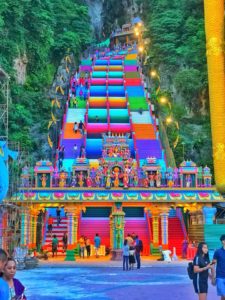 All 272 steps of the staircase have been repainted with a myriad of colours, forming a gradient rainbow-like effect. Traditionally red and white, even the arches and temples within the proximity have been given a paint job.

While it may seem like Batu Caves was transformed overnight, Sri Mahamariamman Temple trustee Datuk N. Sivakumar, the man behind the bright idea, told The Star that it took three days for completion. Another board member, Seenivasan Rajoo, revealed it took 20 volunteers and temple workers.

Sivakumar added, “The painting is part of the Batu Caves temple refurbishment which has been carried out since one and a half years ago.” It was finished just in time for the temple’s Kumbhabhishekham (consecration) ritual, which only takes place once in every 12 years.

Looks like you know where to go this long weekend.