7 Trends to try to this year for a style overhaul 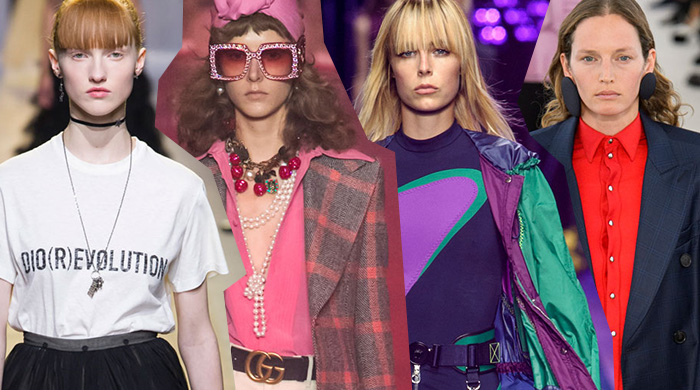 Who would’ve thought that the latest colour to rival the popularity of neutrals would be this romantic? Whether casting off a sweet or dramatic notion, pink is all the rage this season with shades of blush, rose, and fuchsia appearing in a multitude of ensembles. Get inspired by this Gucci look that is peppered with pink throughout, from the snazzy turban to the finger-grazing shirt cuffs. Maria Grazia Chiuri’s debut collection for Dior had one very noticeable detail that set tongues wagging: a handful of tees emblazoned with political slogans that were statement-making as they were simple to pull off. There’s nothing as bold as broadcasting your message over your chest—pair it with a gauzy tulle skirt for maximum effect. The athleisure trend isn’t taking a backseat this 2017 yet, and one of the more popular sportswear fabrics, nylon, is being reworked to greater (more fashionable) heights. Get inspired by Versace’s lineup of nylon jackets and dresses chic enough to wear from day to night.

4. Shoulders that reach the sky If we have to be honest, the big-shoulder trend was already reigning last season. But this time around, this ’80s-inspired trend takes on a squarish shape with boxy, angular-cut shoulder pads spotted in jackets and coats. All we can say is—bring on the power woman vibes. For those who can’t rock 5-inch heels no thanks to the pain, be glad for the return of the low, kitten heel this year. Another throwback trend that were pretty popular in its heyday, kitten heels were spotted on the runways of Dior, Miu Miu, and Acne Studios. If you worry over its old-fashioned label associated with the previous generation, just remember that Audrey Hepburn once rocked dainty heels as such.

6. Bling up your phone Louis Vuitton made it clear last October that your phones will be your new accessory to pay attention to this season, rolling out Petite Malle phone cases that are ranking high on our wishlists as we type. After all, why try to squeeze your smartphone in a minaudiere when you can tote it around in a chic case? Say goodbye to symmetry this year and bring on the bling by mixing and matching your earring stash. While the single-earring trend took off in a flurry as well, nothing is as unpredictable as sporting two statement-making ear accessories at one go.