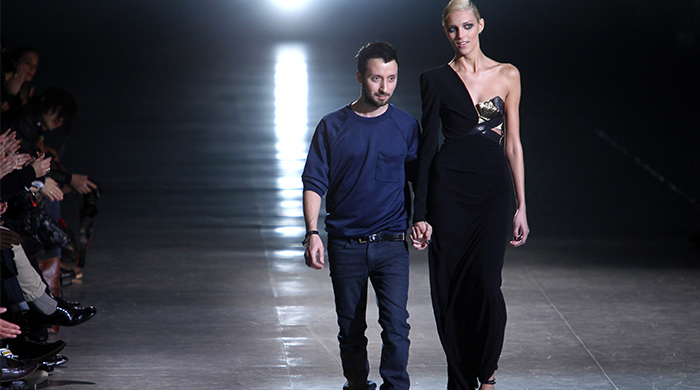 Shortly after Hedi Slimane’s exit at Saint Laurent, parent company Kering has appointed Anthony Vaccarello as the house’s creative director, with his first collection debuting this Spring/Summer 2017. The 36-year old Belgian designer founded his namesake label in 2010 and was later on tapped by Donatella Versace in 2013 as a creative director for her Versus Versace line.

“I am very proud to welcome such a vivid and young force among today’s creative fashion talents to Yves Saint Laurent,” says François-Henri Pinault, chairman and CEO of Kering. “Anthony Vaccarello’s unique style will greatly express the maison’s creative signature and fashion authority, building on the brand’s solid foundations, and further developing it to realise its full potential.”

Well-known for his provocative buzz-worthy gown-jumpsuit hybrid that flaunts the entire hip region and more below (previously worn by the likes of Gwyneth Paltrow and Vaccarello’s muse and friend, Anja Rubik), his tailoring and execution skills speak volumes, although we can’t say we wouldn’t be surprised if Saint Laurent SS17 had a handful of cleavage-baring jackets and slashed and laced-up mini skirts. Similar to his predecessor at Saint Laurent, Vaccarello’s signature risqué aesthetic has been touted to be “one-note” by critics, despite having a legion of A-listers such as Taylor Swift, Rosie Huntington-Whiteley and Jennifer Lopez proudly repping his designs on the red carpet. Also, like Slimane who had catapulted Saint Laurent’s revenue in 2015 more than any megabrands, Vaccarello’s implementation of the see-now buy-now model for Versus contributed to a 17.5 percent increase in revenue of the Versace group last year.

“While I’m sad to see him leave the Versace family, I wish Anthony Vaccarello tremendous success with his next chapter. In the past several years, I have worked with three great young talents on Versus Versace: Christopher Kane, JW Anderson and Anthony Vaccarello,” says Donatella Versace. “In each instance, their time on Versus Versace led to them making a huge advancement in their design career. I appreciated the chance to work with each of these three designers, and I enjoyed seeing what they brought to a brand I truly love…As for the future, I’m most excited about taking on a bigger role with Versus, and doing what I always do – surprising everybody!”