Sneak peek: What K-pop group BTS will be wearing for their Love Yourself: Speak Yourself world tour

From topping music charts (the group made K-pop history as the first Korean act to top the UK charts with their latest album) to sweeping the biggest awards (their most recent prize? Winning the Top Duo/Group award at the 2019 Billboard Music Awards), BTS, which is short for Bangtan Sonyeondan, or Beyond the Scene, is arguably the hottest K-pop group internationally right now. The boy band was even named as one of Time's 100 Most Influential this year. Following the end of their eight-month Love Yourself world tour, BTS will be going on a second tour starting May 4, which will serve as an extension to the previous concerts. The Love Yourself: Speak Yourself tour will feature performances in North and South America, Europe, and Asia, and we've got some details on what they'll be wearing on stage, specifically for the US and Europe legs.

The seven BTS members—RM, Jin, Suga, J-Hope, Jimin, V and Jungkook—will be donning special looks from Dior for their upcoming world tour, and the ensembles are inspired by its artistic director Kim Jones' Pre-Fall 2019 collection, presented in Tokyo last November. This is the first time Dior has ever created men's stage-wear for a pop band. Based on the drawing released by the French fashion house, the stage outfits feature utilitarian sportswear silhouettes with a hint of futuristic feel. Having met BTS ahead of the Grammy awards in February, in a statement released by the brand, Dior Menswear artistic designer Kim Jones revealed that "I love BTS because they are really great guys and also super into fashion. Everyone I know is kind of crazy about them!" We concur. 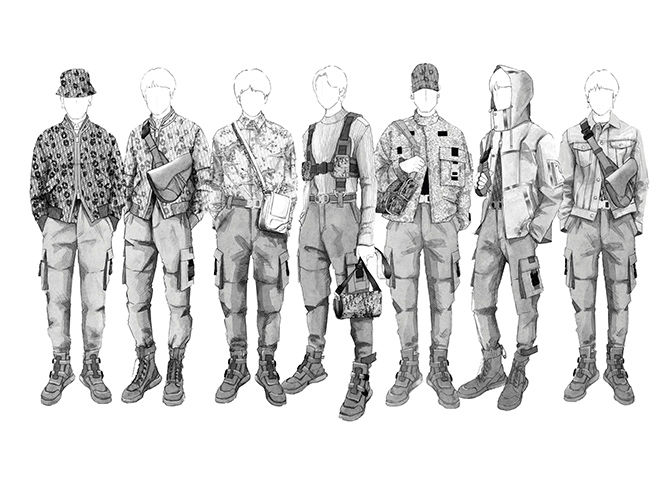 BTS will be sporting the Dior looks at the Los Angeles leg of their Love Yourself: Speak Yourself tour, followed by concerts in Chicago, New Jersey and São Paolo, Brazil in May, and London and Paris in June.

Out now: The Dior Men’s Saddle bags that are on every man (and woman)’s wish list