Despite British designer Sir Paul Smith's latest slew of honourable awards and orders—the recent one being the French 'Légion d'Honneur', he is incredibly modest for a man who has fared excellently in both realms of fashion and design. The 69-year old designer isn't particularly interested in the typical symbols of wealth (by his own admission) and still prefers taking the bicycle over a car ride oftentimes. Sir Paul Smith shares many facets of his personality in the following interview:

I heard you dislike it when people call you "Sir". Why is that?

(Laughs) Well, I think it doesn't really suit my character. When I was knighted Sir I wasn't entirely sure whether I should accept it. Sometimes it happens that people got titles for wrong reasons. But my staff said: "Yeah, of course you should accept it!" - and so I did.

Do your staff call you Sir?

No, they call me just Paul which is perfect, I think. By the way, two or three weeks ago I was given France's highest honour - the Légion d'Honneur. And we had a big event in the French Embassy in London dedicated to this. I also have the CBE which is the Order of the British Empire and it's the most excellent order in the Great Britain. And I was awarded an honorary fellowship of the Royal Institute of British Architects. So it seems I got plenty of different rewards.

Do have something like a special place for all your rewards?

Before you were involved in fashion you had been a professional cyclist. But you had got into traffic accident and that had changed all your plans about sport career.

That's right. But thanks to this accident I discovered a whole new world of creativity. I'd been in hospital for three months and there I met two boys - one was after a motorbike accident and another was after a car accident - and we became friends. We decided to keep in touch after we left the hospital. Luckily for me one of them chose a very extraordinary English pub in our hometown for the meetings. This place was special because students from the art school went there every day. So after visiting this pub for a few times I got interested in people there and started asking them about what they were doing. And that was how I discovered architects, fashion-designers, photographers. The whole new world of creativity opened to me and I thought: "Wow! It's possible to earn money for living from doing something creative".

Have you ever regretted that you didn't become a cyclist?

I think I would have never been good enough at it. It was just a dream for me. But then I met a girl who asked me if I could help her start a little shop because her dad gave some finance. And so we did. Then eventually I started my own shop and slowly I got where I am now.

It seems that lucky coincidences are a great part of your life. Even your famous bright stripes that were supposed to be a part of only one collection became the symbol of your brand.

Oh yeah, those stripes...Actually now we've stopped using them. We use them only in wallets, scarfs and other small things but not in shirts or bags or something big. Why? Because it is very distinctive for the brand and became too popular. Today I find it not modern enough. But while getting back to your question about lucky coincidences, well, that accident I got into while cycling probably can be called momentous. And these stripes which were made for only one season and then everybody started to ask me to make them again - they too can be called some kind of luck. But actually that's all, I can't remember anything else that can be viewed as a lucky coincidence.

Are you one of those people who prefer bikes to cars? I know you still ride a bike...

Yeah, I ride a bike. I like bicycles because there's something personal about it. When you ride a bike it's all about you. When you put your foot on the accelerator everything is about the car. But definitely I don't reject cars and I drive a Mini which is absolutely convenient in London where you always have troubles with parking. In Italy I have a Land Rover and that's all. I think I am a very modest guy and I am not really interested in all those symbols of wealth. 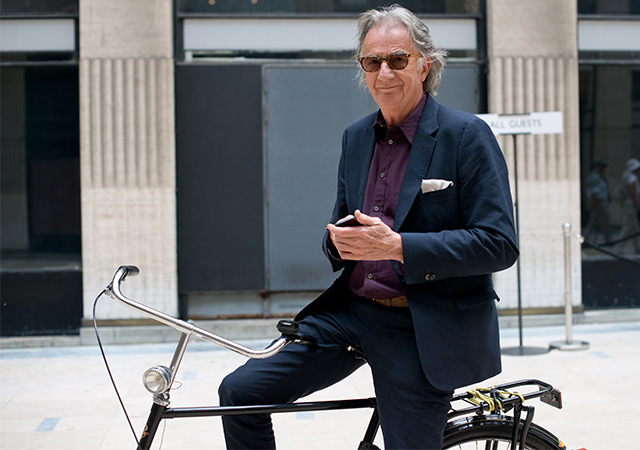 You said once that if you weren't a designer you would have become a photographer. How did your passion for that come along?

When I was 11 years old my father bought me a camera. He was an amateur photographer himself. Now it's all digital but he used a film camera so in the attic of the house he equipped a laboratory for himself where he kept all the chemicals, films and other things. When I was 12 or 13 I used to develop photographs together with my father in this room. He also started the local camera club in our town and I used to go to the meetings of this club where I learned about lighting, composition, etc. Now I shoot a lot of my campaigns, shoot stories for magazines. So photography is still a part of my life. But besides it I have my "day job".

You have just published a book with your photographs called "Paul Smith: From A to Z". Can you tell more about it? And do you have plans about some more books in future?

The next book is going to be about my collection of cycling memorabilia. It might be boring for you, but for me it's really meaningful. I have many jerseys signed by famous cyclists, many magazines and tickets from championships. One of my friends is writing the text for this book. It will be called "Paul Smith's Cycling Scrapbook" (by the time this interview was published the book had already been introduced. Devoted fans of Paul Smith or cycling can buy it on Amazon - Buro 24/7). My book "Paul Smith: From A to Z" is interesting because it was made literary in one hour! There was a TV documentary made by ARTE called "Paul Smith, Gentleman Designer". When the ARTE team came to interview me about what to put on the cover of the DVD, I told them so many things that one of the guys was like: "Oh, God, that's too much information!". And the idea to make an A to Z book came into my mind. So about in one hour we created the whole book. It was really spontaneous!

I know you have a great collection of books in your office.

"You should get satisfaction from your slow growth...I don't desire a great wealth. When I make a little bit of money I put them back into the business." - SIr paul smith

It's said you prefer reading biographies. Whose biography is your favorite?

I love the biography of Yves Saint Laurent. It's not the one I've read recently, it's the story that helped me when I was at the start. It was interesting to see how he and his team got the right balance between business and creativity. As you may know, Paul Smith is quite a unique company as it's totally independent, it doesn't belong to any big group—it's just my company. And sometimes things become complicated because I not only discuss design with my team but also have to think about business. So reading biographies like Saint Laurent's can be very helpful in this aspect: you just learn how things work in different situations and with different people.

That's actually an interesting question: How did you manage to prevent your business from being a part of a big group like LVMH?

That's unusual nowadays, isn't it? Today every brand is either very small or a part of a big group. The answer to your question about how to keep your company yours is being patient and not trying to go like a rocket. You should get satisfaction from your slow growth. As I said earlier, I don't desire a great wealth. When I make a little bit of money I put them back into the business. For instance, this building we are in now, is my own, we don't rent it—I bought it. My shops are also located in my buildings. I don't put money in private airplanes or something like that. I am interested in other things.

You said once you prefer doing men's clothes because it's easier. But today there are a lot of lines under the Paul Smith brand—how do you manage to control all the processes?

Every week we get offers to design something. It could be a design of a car, a hotel, furniture, etc. And normally I reject all the proposals because frankly speaking I am so busy! And I don't give projects to someone else since I prefer doing everything myself, especially something challenging. Usually I can give an answer whether I'll take the project or no immediately. It's always very instinctive. If I say "yes" it's normally means that I have some sort of a link with the thing. I hate things that are untruthful. I couldn't resist working with Leica Cameras because I remember my father dreaming about one day he would have a Leica. And the approach was very exciting. I am so familiar with designing clothes and can do everything really quickly without fitting or measurements. But designing a camera was something absolutely new.  When you dive into a new sphere the process is always long because you are learning and you want to understand every detail.

You are a famous collector and you collect many different things. Do you have something like a system for all the items you collect?

(Laughs) No, there's no any system at all! One of my friends said to me recently: "Oh, you are a great collector"—and I was really surprised about that. I don't think of myself as of a collector. But I do really have a lot of selections of the same things. And she said it's exactly what a collector is. But there's no any system. I just buy things spontaneously.

Well, I think literally everything has changed! Things are so instant now because of e-commerce, social networks, etc. And we have a lot of low-cost brands like H&M or Zara, which copy the clothes from the fashion shows faster than we manage to produce them. Now as a fashion designer you have to clear your point of view, have a strong concept and think about what surrounds your brand. Fashion is not enough—you need a position.