Chanel Métiers d’Art 2016: All the details you need to know 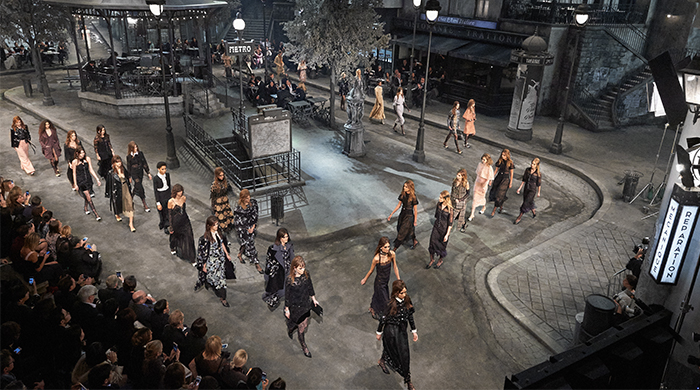 1. It was a glamourous encounter of Paris meets Rome, as the presentation was held at the legendary Cinecittà Studio N°5 in Rome (the largest film studio in Europe) where the black and white décor—an ode to Alexandre Trauner, the famous production designer—harkened back to classic film settings of the 30s and 40s. It was perhaps Karl Lagerfeld’s idealised Paris neighborhood of the past, complete with cafés, wine merchants and a cinema.

2. After the cocktail party on the film set which saw the presence of FROW attendees including Chanel ambassadresses Kristen Stewart, Anna Mouglalis and Zhou Xun, actresses Rooney Mara, Geraldine Chaplin, and HRH The Princess of Hanover, Karl Lagerfeld’s latest short film Once and Forever, featuring Kristen Stewart and Geraldin Chaplin was premiered.

3. And obviously, a grand entrance in a Chanel show is a requisite, with models sporting heavily-lined eyes exiting from the Rome “train station” of Paris’ metro line 5, clad in the house’s signature two-toned mules (updated with a serpent around a pearl on the heel) and toting minaudières in python, alligator and tweed.

4. Outstanding silhouettes that combined the sensuality of lingerie with a dash of grunge made the collection—colours were earthy with ochre, brown, beige, grey and black, while textures were naturally fall-like, with tweed, mohair, chiffon and georgette. The iconic Chanel suit came as a trompe-l’oeil dress or a three-piece version; Palazzo pajamas-inspired looks include tweed pants and patterned wool sweaters; and contrasting elements such as fine lace and leather made for a trés chic collection with Italian accents.