When it comes to fashion, Elle Fanning has no doubt made headlines over the years for her impeccably sophisticated style. But the past two weeks in Cannes, the actress brought her fashion game to new heights by showing up on the red carpet in head-turning ensembles that got everyone talking—in the best way. From a feminine floral gown to a look that exude old Hollywood glamour like no other, the youngest jury member in Cannes Film Festival history is having an incredible fashion moment at this year's event, and we can thank her stylist, Samantha McMillen, and of course, Elle herself for it. Not convinced? Below, are 13 of her looks so far as proof.

Scroll down for all the deets: 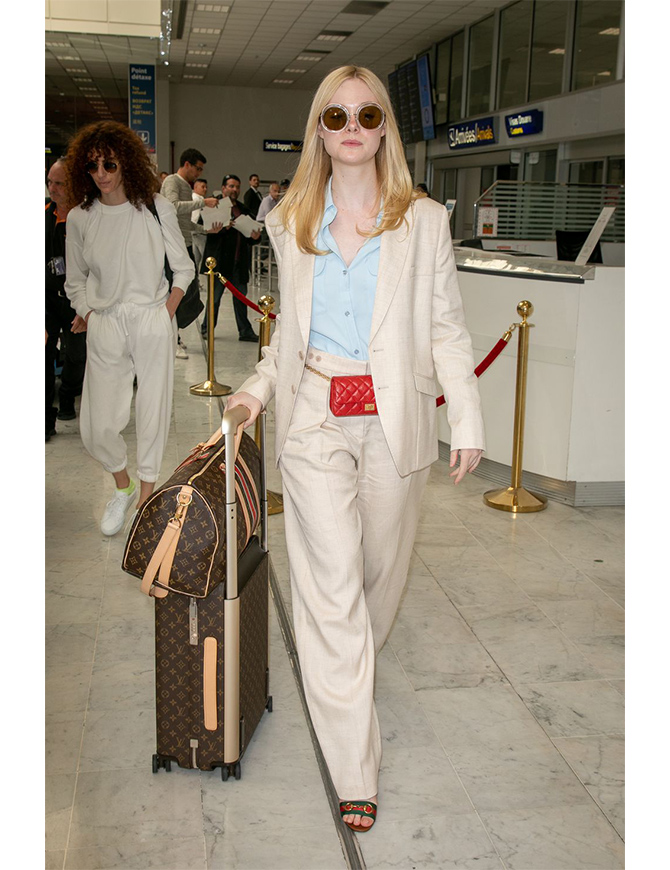 May 12: Elle Fanning touched down in Nice in a cream-coloured pantsuit, with eye-catching accessories to complete her airport look, from a Chanel fanny pack to Gucci heels and Louis Vuitton suitcases. 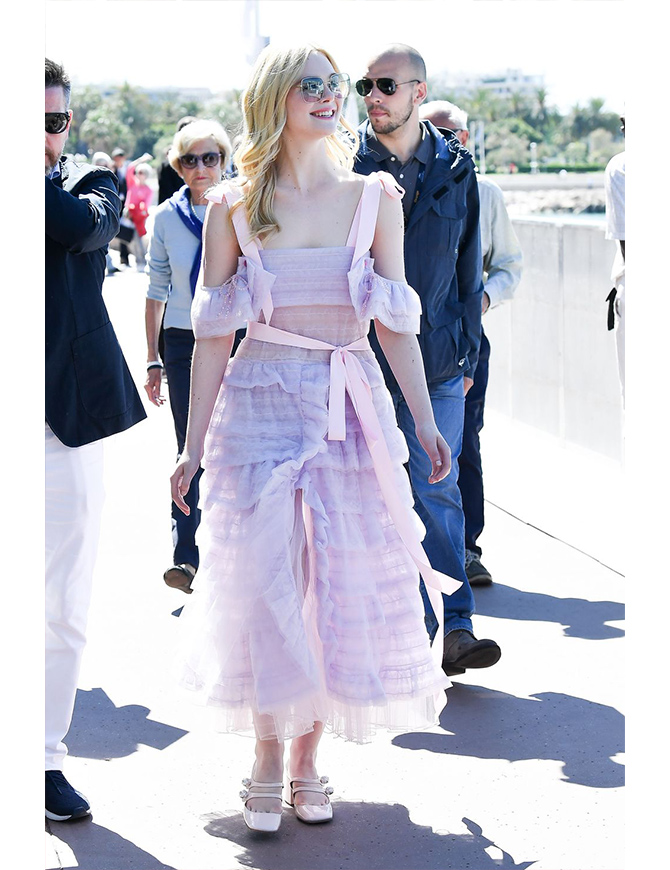 May 14: Fanning soaked up the good weather in Cannes in a ruffled Ryan Lo dress in a pretty combination of lavender and soft pink hues. 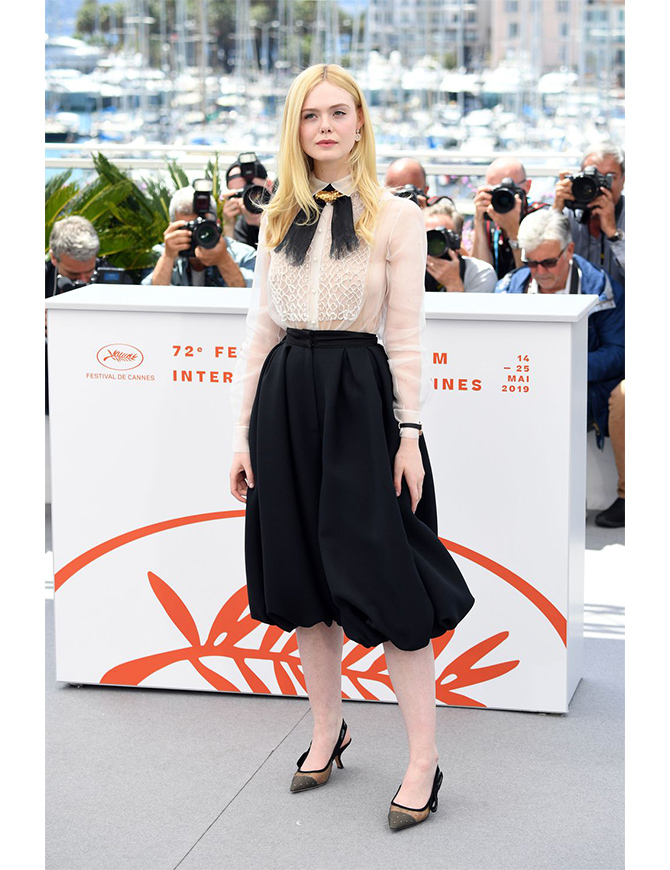 May 14: The star attended the Jury photocall during the 72nd Cannes Film Festival wearing a Dior Haute Couture look and a pair of J'Adior pumps. 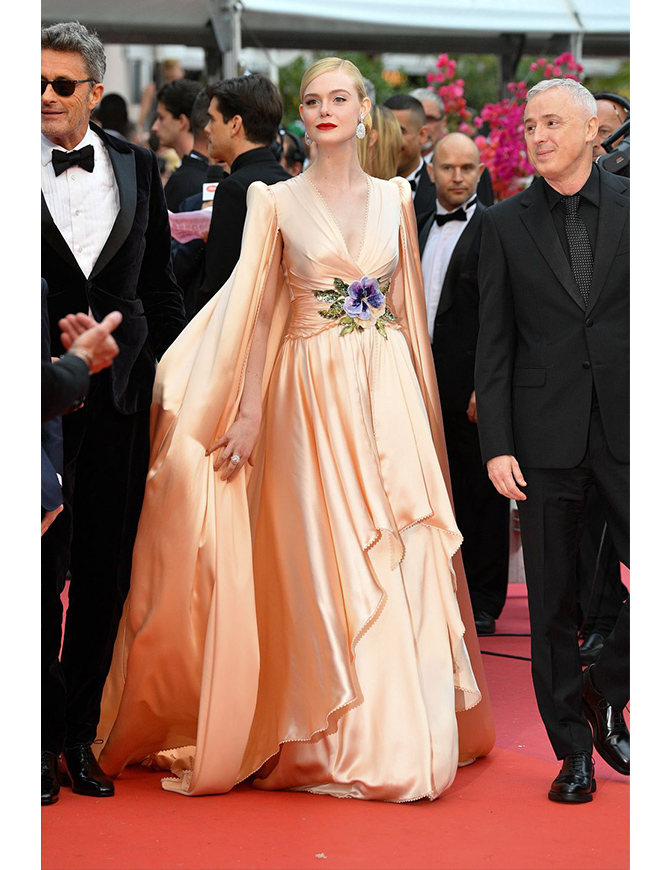 May 14: To keep the (style) ball rolling, on the same day, Fanning attended the opening ceremony and the screening of The Dead Don't Die in a satin Gucci gown that comes with a flowy cape. Adorning her lobes, are earrings from Chopard. 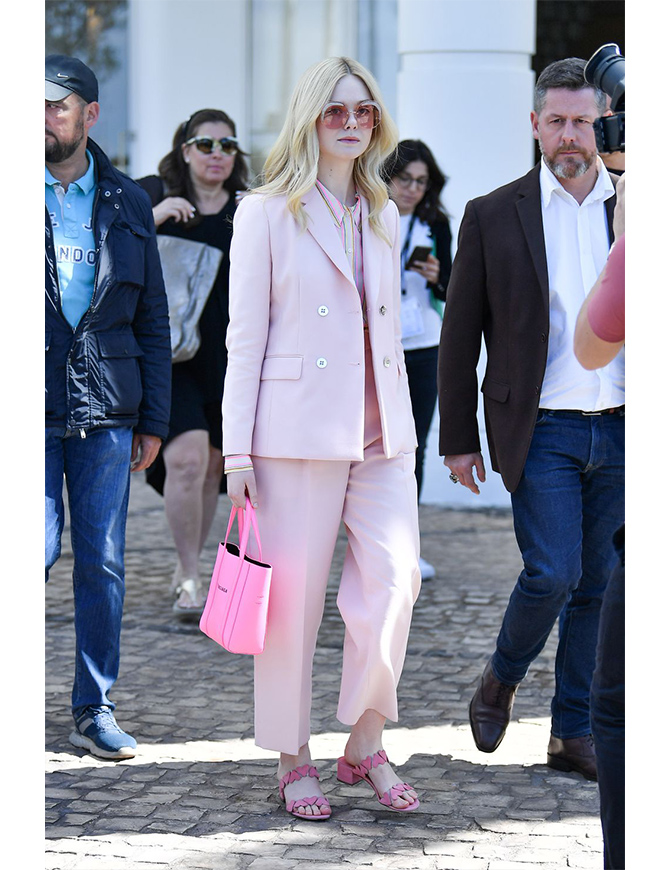 May 15: Fanning showed how wearing one colour from head-to-toe is done by stepping out in a pastel pink Sandro suit with a matching hued J. Brand shirt, complete with an oversized sunglasses from Fendi, neon tote from Balenciaga and sandals from French designer Laurence Dacade. 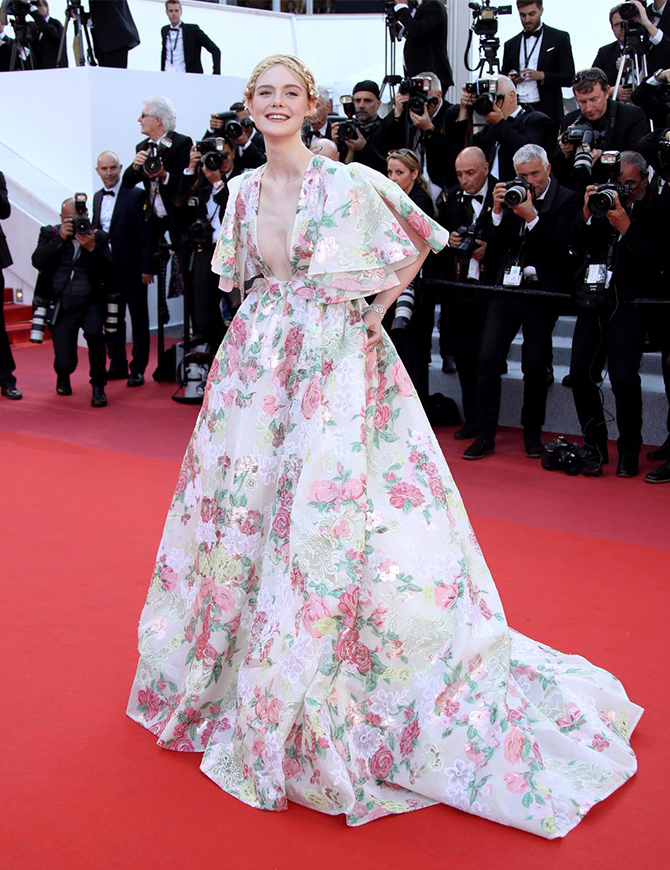 May 15: The actress walked the red carpet for the screening of Les Miserables in a look that's worthy of a modern-day princess. The floral gown from Valentino is complemented with flowers in her hair and complete with jewellery from Chopard. 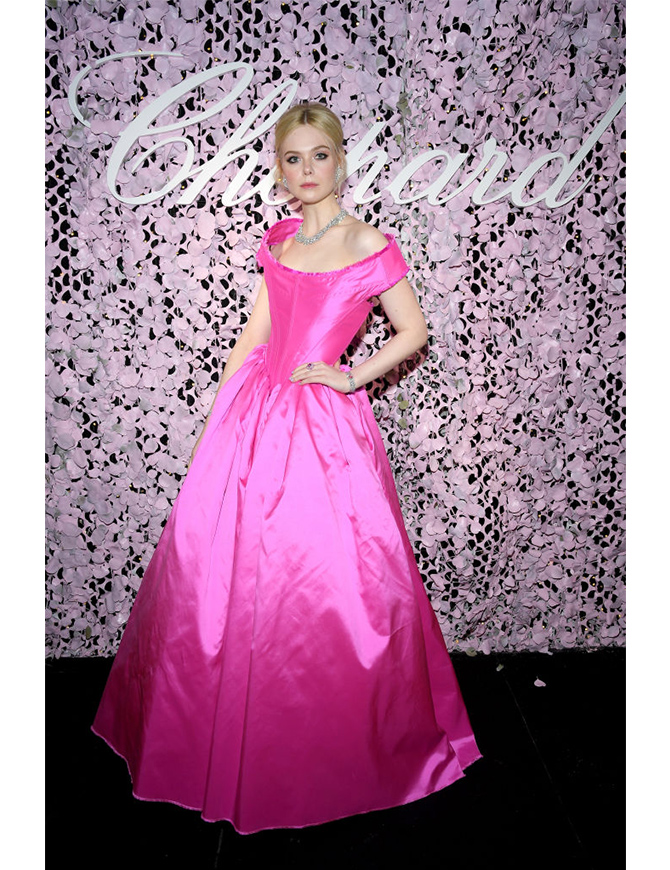 May 17: To continue her streak of pink looks, the starlet made an appearance at the Chopard Love Night gala in a Barbie-pink Vivienne Westwood Couture gown that gave us a hint of Cinderella vibes. 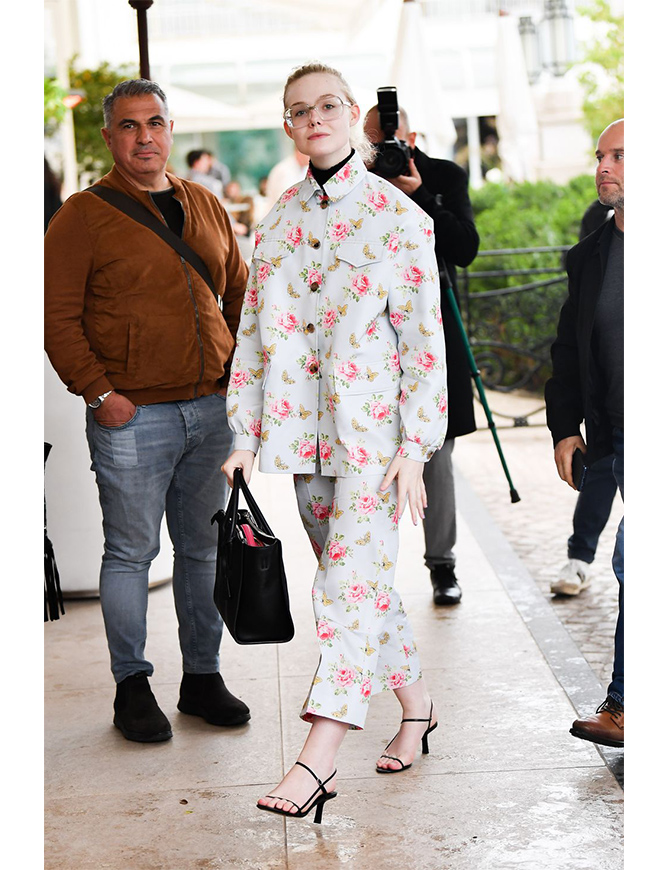 May 18: Fanning went geek-chic on day five of Cannes Film Festival in a floral co-ord and paired it with a square framed glasses. 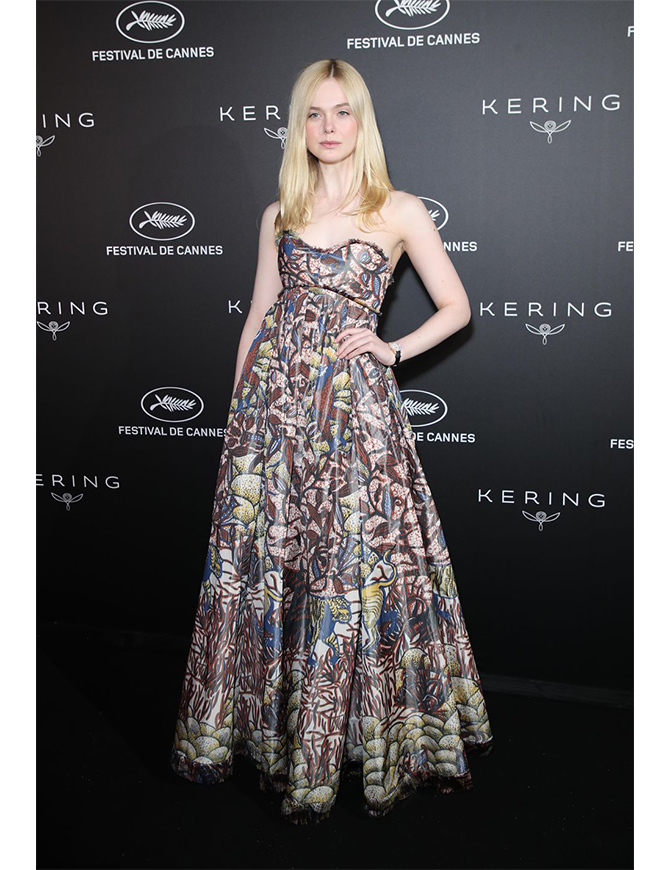 May 19: At the Kering Women in Motion Awards event, the star wore a Dior silk bustier gown and kept her hair and makeup simple and sleek. 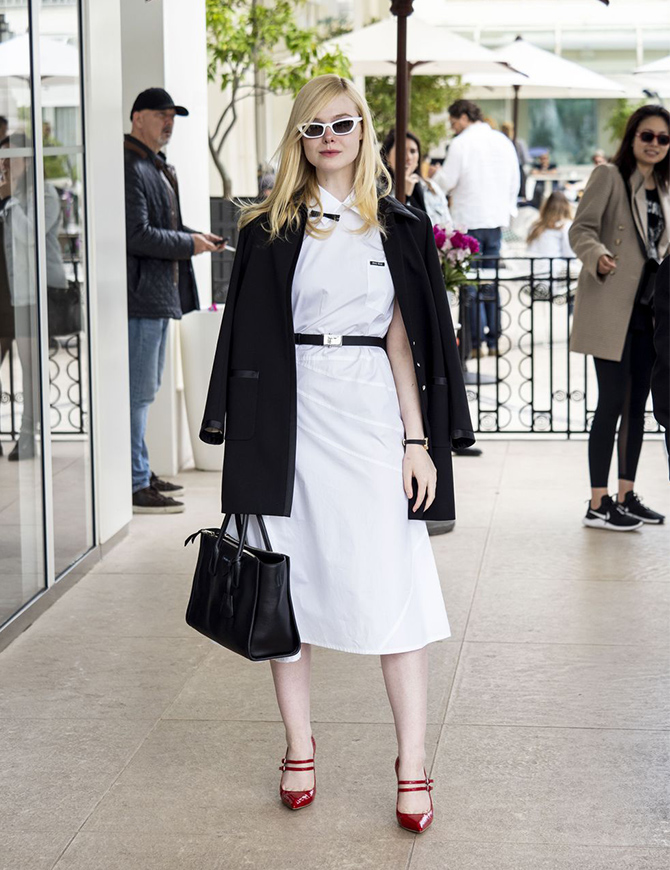 May 20: On her day off, the 21-year-old was spotted in a black-and-white Miu Miu look, and added a pop of colour in the form of her red Mary-Jane pumps. 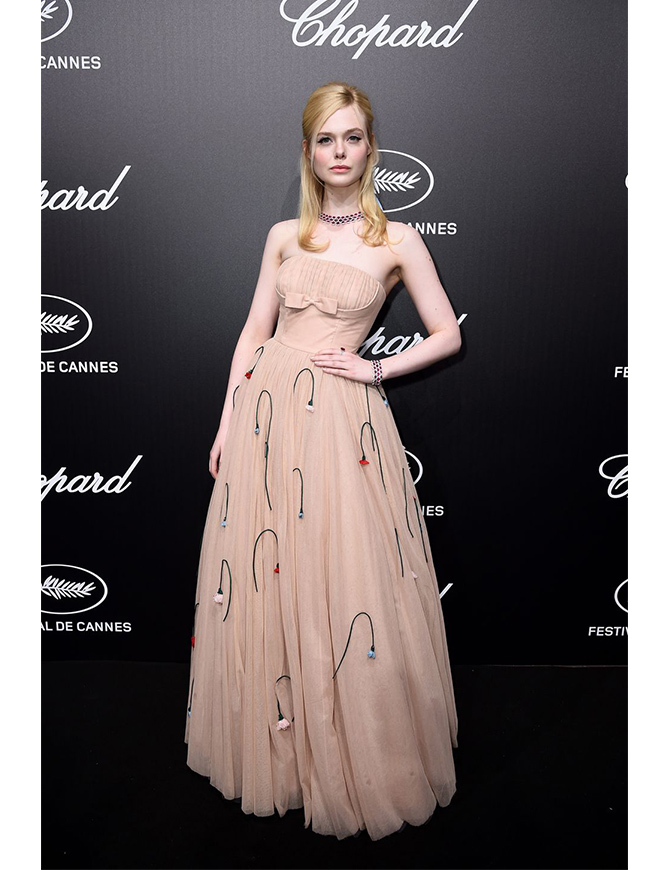 May 20: After walking the red carpet at the Chopard Trophee event, the actress had a fainting spell during the dinner party from her blush Prada gown as it was too tight. 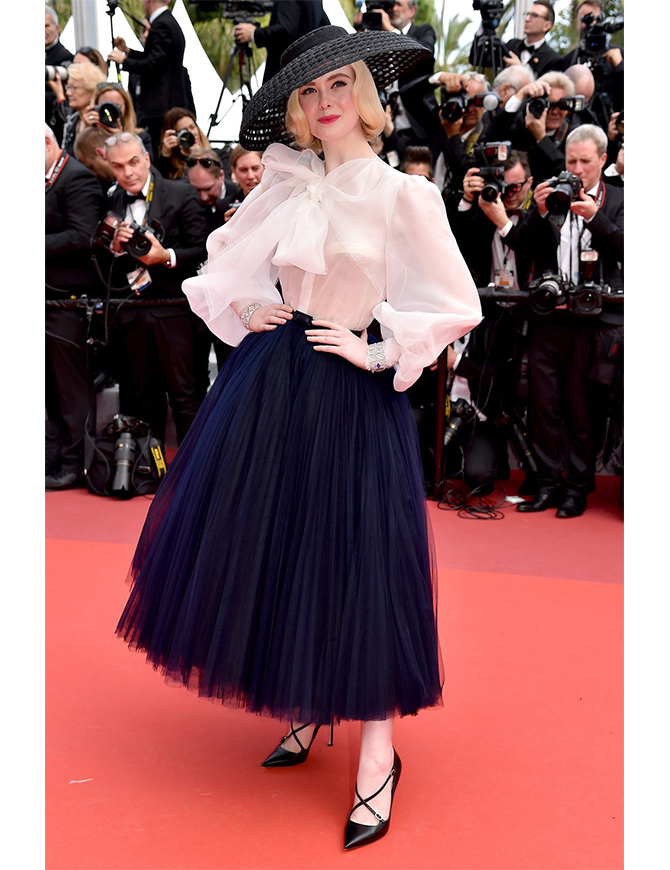 May 21: At the screening of Once Upon a Time in Hollywood, the reigning princess of Cannes stunned in a '50s-inspired Dior Haute Couture look that oozed old Hollywood glam like no other. The outfit took 450 hours to make, with 200 hours spent on the skirt alone. 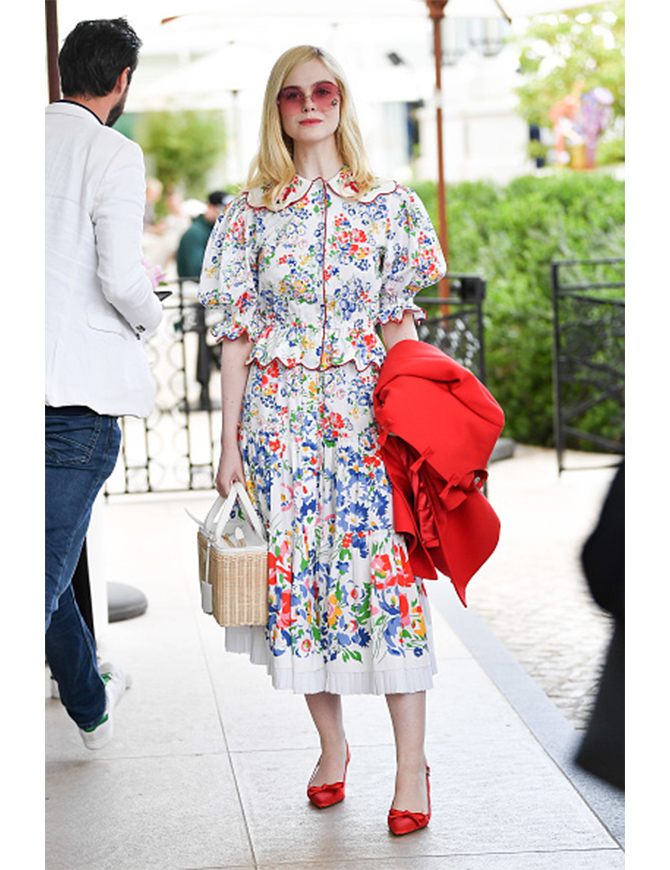 May 22: Fanning showed up for the Mayor's lunch in Cannes in another '50s-inspired silhouette in the form of a Marc Jacobs floral get-up and a Prada straw bag.