Why 'The Phantom of the Opera' is as relevant as ever

Wondrous spectacle aside, layers of lessons on life and love are to be unraveled from ‘The Phantom of the Opera’, as we learned from the main cast of the critically-acclaimed world tour production

There are few musicals that hold a place quite as revered as The Phantom of the Opera in the world of musical theatre. Since its debut at Her Majesty's Theatre in London's West End in 1986, the iconic musical has been performed to over 145 million people in 150 cities across 30 countries—and the numbers keep growing, with the world-touring production set to make its premiere on our shores in Istana Budaya come 15 June.

With a heartwrenching story of love, lyrics that hit you right in the heart, and Andrew Lloyd-Webber's beautiful, haunting melodies that linger long after the curtains draw to a close, anyone who has had the pleasure of watching the musical will probably agree: it is pure magic, brought to life by a set that is just as magical—and this writer can vouch for it after catching it first-hand during the production's stop in Manila. I could go on and on about the set design, but one of the most memorable scenes for me was the masquerade sequence. It was elaborate; it was dazzling; it was captivating—so much so that a collective "wow" swept over the audience to the opening of the scene.

More importantly, the musical remains as relevant as ever three decades on, as the main cast thoughtfully iterates in our post-show chat with them. For the touring production, Jonathan Roxmouth reprises his role as The Phantom (he first played the titular character in the 2012 tour), and soprano Meghan Picerno is Christine Daae (interestingly, Picerno first portrayed Christine in the Phantom sequel Love Never Dies prior to this production). Rounding out the starring trio is Matt Leisy in the role of Raoul Vicomte de Chagny.

Being in such an iconic production, how do you approach these roles that are just as iconic?

Matt: "I connect to Raoul in the fact that he seems like a good-natured guy. Of course there are aspects that might not be as relatable; he's been handed a good deck of cards in life, everything has been given to him so easily and then he's presented in a challenge in the form of Christine. He really gets to grow in the course of the show—he falls in love for the first time, and he becomes a lot less selfish. It's nice to have a character that has a journey from beginning to end."

Meghan: "Speaking of journey, I think this is something I really love about Christine Daae. She's so ingrained into so many different societies across the world that it's really important to realise that you see this girl become a woman through the course of the show. We do have to remember that Christine Daae didn't have the same freedom and rights that I, Meghan Picerno have in 2019, with movements like #MeToo etc. However, as much as I can within the context and constraints of the show—the blocking, the tradition of it all, the music—I try my best to empower her as much as possible. While she does willingly give her up her power to men at the beginning, she makes her own choice choice at the end, and that's a really important narrative. 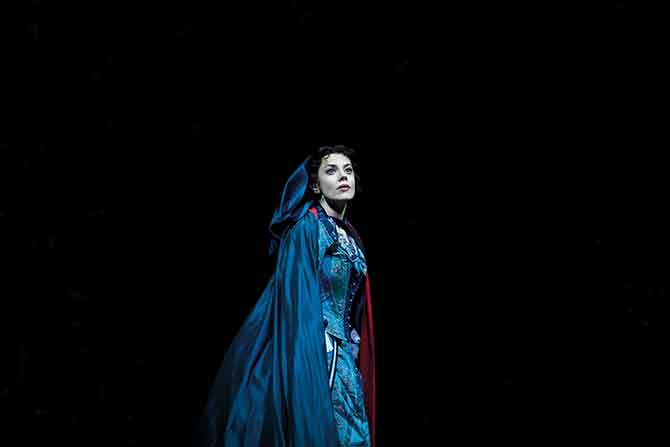 "Christine, she is a prodigy; she is a woman who grew up on fantasy. I think we are kindred spirits in the way she lives for music—for me, it is the same. I was bitten by the music bug, and I have no choice (laughs). It consumes me, I'm obsessed with it, I love it, I love the storytelling of it; and she is all of that. She is a vessel, and that is exactly how I feel. It's really quite an honour, and wonderful to be able to take on this role."

Jonathan: "Coming back to the role of Phantom has been an interesting journey, because you realise how much you've grown—or haven't grown—in your own life. The thing is, I know that this is as good as it's going to get for me as an actor in musical theatre with an existing role. Any actor who has played the Phantom will tell you it is the most challenging, most rewarding, most exhausting, most heartbreaking, most everything—but like most addiction to serious drugs, you can't help but keep doing it again and again. The difficulty with this role is everyone knows the show, and they probably feel they know how these roles should be played. Because the show is so owned by the audiences that come to it, the pressure in these roles is unlike anything I've experienced in any other production. That is a testament to the writing; that is a testament to what an incredible piece of theatre it is.

"Picking up on the #MeToo movement Meghan mentioned, for me, it's also the issue of toxic masculinity in this world we're living in. I think the men in the audience are the most interesting people to watch in terms of how the show affects them, because men aren't supposed to cry, are they? Whereas the Phantom is all about showing what you feel, and he sobs like a five-year-old basically from Music of the Night until the final scene in the lair and isn't afraid of it, he's not ashamed of it—it is what it is. I think that is something I had to really learn and take on board. I don't think there's anything stronger than being quite clear about how you feel, and the Phantom exemplifies that. As Meghan said, in 2019, the effect on the audience is perhaps more profound and more relevant than ever." 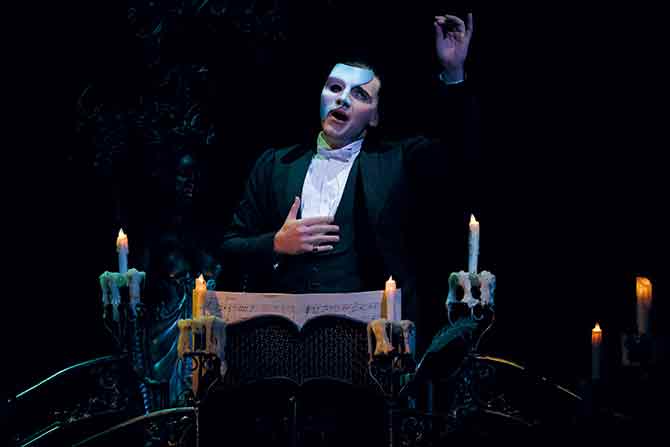 Would you say this sense of affecting—or inspiring, if you will—the audience is what drives you to perform with the same amount of passion day in, day out?

Meghan: "Playing these iconic roles, our performance just might be someone's first experience of musical theatre, and you never know who you're inspiring to be a part of the next generation. I pride myself in thinking that the three of us have the responsibilities of being role models not just on-stage, but off-stage as well. So when we meet our fans, and they want to know how do we do it—we kind of have to be aware of the fact that we are role models, what we do can influence the next generation, and hopefully we do that for the good."

Matt: "Yeah, I've never been in a show that affects people so strongly. Literally everyday we get contacted by people via social media saying how special that evening was for them, how they'll remember it forever and things like that, so that definitely helps fuel the energy we bring to the show each night, because it really does affect people. We're part of a legacy, and it's a great responsibility." 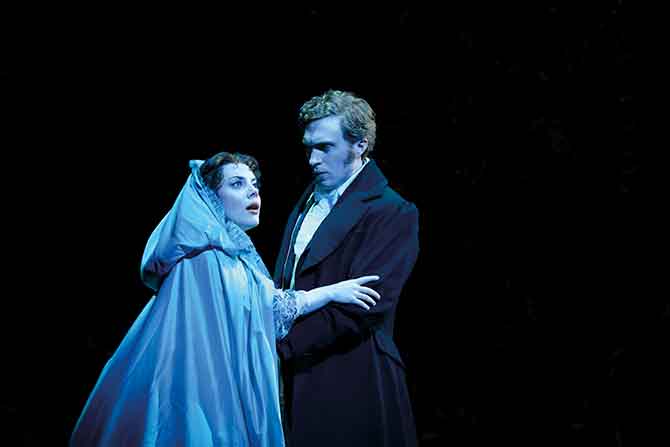 Phantom is coming to KL for the first time ever and we really can't wait! How does it feel to be bringing a show like Phantom to KL?

Jonathan: "There's something about a premiere of a musical—it's always special. Phantom is not just a musical, it's regarded as the musical. To take it somewhere for the first time is always the ideal, because there's nothing to compare it to. If you haven't seen Phantom, you have no idea—there's nothing that beats the first time they see the boat, or the masquerade staircase, or the chandelier."

Meghan: "I think it's a great honour too, in the sense that we will be the cast to present this beautiful piece that is so iconic and universal to the public of KL. That is such a responsibility and such an honour. It has also been incredible to be able to cross cultural boundaries and barriers via music and theatre—we might come from different places and backgrounds, but we all understand what's going on in the show, and that's amazing.

Jonathan: "Also the Istana Budaya is one of the most beautiful places I've seen. We can't wait to perform there."

Finally, what are your personal takeaways from the musical?

Matt: "I feel like I represent more of the romantic side of the show. One of my takeaways from the story is to allow yourself to fall in love. I think in most people's experiences, when you do fall in love the second time, you'll always be a little more cautious, and you don't fully go into it as you did the first time. I think it reminds me to just go with it when it feels right, don't second guess it and find reasons not to go above and beyond."

Meghan: "Mine is along the same line as well—it is to love. It's kind of two-pronged. There is so much fear in the world right now, and a lot of decisions are being based in fear of the unknown. I think if we made our decisions based in love, then we would have a very different world. At least at this moment in where I am with discovering Christine and myself and the show, it is to base your decisions in love and acceptance."

Jonathan: "I still have moments where I just full-on sob in the show—not because I'm an indulgent actor, but because sometimes it just catches up with you and you go: "this poor guy". I often get asked what's it like to play the villain in the show and I always get so defensive of him because he's not the villain; I think society is the villain. He is the product of a society that was fundamentally broken, even in the 1800s, when it comes to what people see without getting to know. We're at an age now where the concept of bullying is more prominent than ever, especially with the internet and social media.

"Every now and then I think about how one of the main reasons we have a show is because we all buy into the idea and we accept that society could do this to somebody. You have this man who has so much to offer—as a human being, as an artist, as this incredible inspirational figure—but people just see a monster. Books like Mary Shelley's Frankenstein also show that people have been writing about this since the beginning, so nothing's changed. That makes me sadder than anything else because I just think that we pride ourselves in being so advanced but I think it's safe to say we still have some way to go."

'The Phantom of the Opera' will run from 15 June to 5 July 2019 at Istana Budaya. For ticketing and more information, click here.

Insiders
Interview
Musical
The Phantom of the Opera
Istana Budaya

Capturing “Ageless Beauty”: The portraits of old women that we rarely talk about