On Wednesday (7 February), 'OlaBola The Musical' opened to a full house at the newly renovated Panggung Sari, the main stage for theatre performances in Istana Budaya. Directed by Puan Sri Tiara Jacquelina, it is adapted from the film about our national football team a.k.a. Harimau Malaya and their journey to qualify for to the 1980 Olympics.

The moment we stepped into the theatre, we were virtually transported to Stadium Merdeka—large LED screens formed a semi-circle along the stage, portraying a stadium filled with cheering fans, supported by a surround sound system. It's the first time projected visuals are used so extensively in musical theatre, and while sometimes the screens act as set backgrounds (this was used to particularly stellar effect in a scene just before half-time), they were also used to portray graphic illustrations that helped amplify the story-telling.

Catch a glimpse of the set in the rehearsal footage below:

The diverse cast of talents sang, rapped, danced and acted their hearts out on stage. Luqman Hafidz and Jian Wen reprised their roles as Ali and Ong Thiam Cai respectively, while the majority of the cast were no strangers themselves to the theatre and arts scene in Malaysia. Iedil Putra was excellent as sports commentator Rahman, earning smiles all around the theatre hall whenever he was on stage with his wit and charisma. Other scene-stealers include Nasz Sally as sassy office manager Cik Kiah, and Douglas Lim as the critical yet comical kopitiam owner Mr Wong. The more emotionally raw moments in the musical were delivered to great effect by Nave Vj, who played the father of "Spider-man" Muthu. 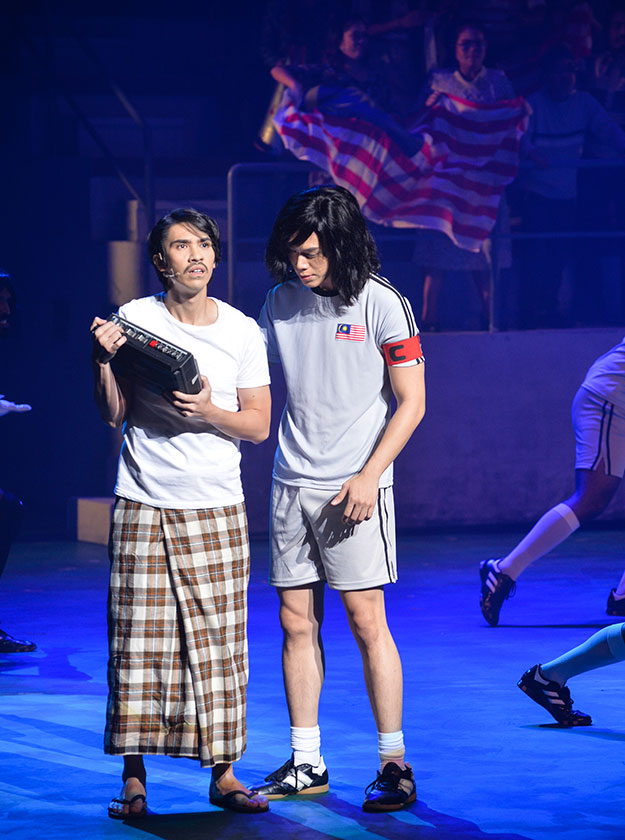 In true Malaysian spirit, not only is the script multi-lingual, even the music genres in the musical span from hip-hop to ballads, which was quite a pleasant surprise for the Hamilton fan in me. The hip-hop leanings are also seen in the choreography, particularly in the scenes of football matches. If you wondered how they were going to portray a football game on stage, imagine actual football elements tied in with special movements (choreographed by Stephen Rahman-Hughes, who also plays Coach Harry Mountain) and street dance moves, as well as breakdance performed by b-boys doubling as footballers on stage—even the digital screens played special effects, particularly in the last match against South Korea. 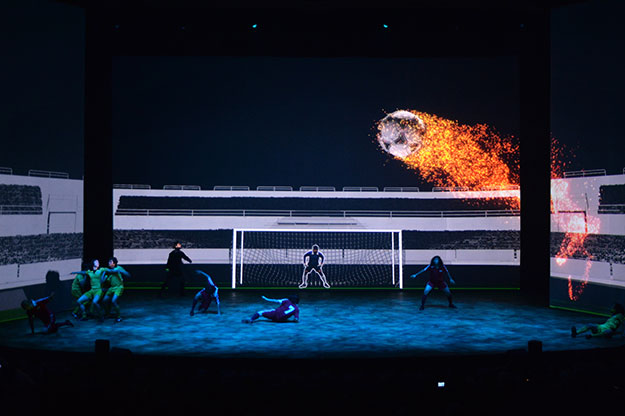 There were some glitches here and there—it was opening night, after all—but nothing dampened the spirits of the passionate performers nor audience, whom gave a roaring applause of approval at the end of the show. In short, OlaBola The Musical will have you smiling, laughing, singing along (even if it's not aloud) and rooting for the Harimau Malaya all in the name of the Malaysian spirit that is really #luarbiasa.

Don't miss it—'OlaBola The Musical' runs until 11 March 2018 at Istana Budaya. Get your tickets here.

A Mak Yong adaptation of ‘A Midsummer Night’s Dream—reprised