The story of light over darkness behind Deepavali

While there are several stories on the origin of Deepavali—depending on the regions in India—they all share one common theme: the triumph of good over evil, hope over despair, and light over darkness. The festival gets its name from the words row (avali) or clay lamps (deepa) that people light outside their home during the festival, symbolising the inner light that protects them from spiritual darkness.

Here, we'll be telling one of the most common tales behind the festival - the story of Lord Rama from the epic Ramayana.

Once upon a time, King Dasharatha ruled the ancient city of Ayodhya. He had three wives: Kaushalya, Sumitra and Kaikeyi. After a long rule on the throne, an elderly Darsharatha expressed his desire to crown Rama, his son with Kaushalya, as the new King. But before the ceremony, Kaikeyi - whose jealousy is aroused by the wicked maidservant Manthara - stepped up to claim two boons that Dasharatha had long ago granted her. She demanded two things, that 1) Rama is to be exiled into the wilderness for 14 years, and 2) her son Bharata is to be made king. Dasharatha gives in to her demands with a broken heart, while Rama calmly accepts his father's orders and went away to the forest with his wife Sita.

One day, in Rama's last year of exile, Sita was captured by Ravana, the demon king of Lanka. Ravana took her away and kept her as prisoner until she would agree to marry him. With the help of Hanuman, the biggest devotee of Lord Rama and the greatest of ape heroes, Rama succeeds in finding Sita in Ashoka Vatika. A great battle ensues between Rama and Hanuman's army of apes and Ravan. In the end, Rama emerged victorious, freeing Sita from the grasp of the demon king. 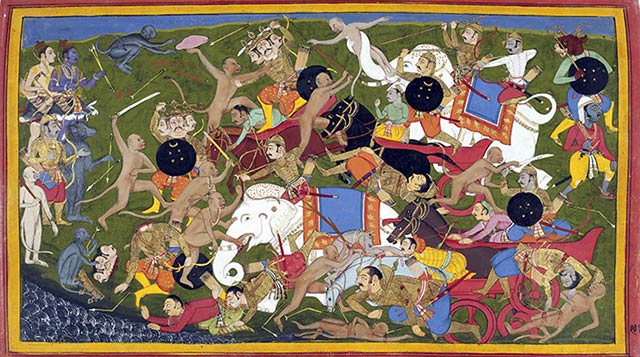 After the fourteen years of exile, Lord Rama and Sita returned home. The people of Ayodhya celebrated their beloved prince's homecoming with grandeur; rows of oil lamps were lit to welcome him home, while fireworks were set off to commemorate the defeat of Ravana, marking the triumph of good over evil, and light over darkness.