The art is here and now

During the Soviet era, there was once an emblematic and very famous restaurant in the modernist pavilion called ‘Vremena goda’ (Seasons of the year), which was built in 1968. By the ’90s, it was in decline and the place was eventually abandoned. The boisterous parties with champagne and musicians were replaced with empty halls, which soon resembled the backdrop for most post-apocalyptic stories. At the request of Garage, Dutch architect Rem Koolhaas and his team at OMA worked on the reconstruction of ‘Vremena goda’. At that time, all that remained of the pavilion was the supporting structure with mosaic and tiles at some places, while the rest of the construction has literally turned into ruins in the span of 20 years from being vacant.

With the efforts of Koolhaas and his colleagues, the first permanent home of the museum of contemporary art (a status granted to Garage in 2014) has become a model example of contemporary architecture—one that aims at the future, yet respects the past. The state-of-the-art building facade is made of a translucent double-layer polycarbonate that is raised two meters from the ground, to visually reconnect the Museum’s interior to the park, whereas its concrete body has remained. The original mosaics have also remained, and is incorporated into the decor of the museum interior by the architects. The 5,000 square-metre venue is made up of an atrium, five exhibition galleries, an auditorium, cinema, bookstore, and cafés on three levels, all at the disposal of art lovers. It gives you all the reasons you need to visit the museum and makes you dread to leave it. For this purpose, expositions play a major role. Garage created seven exhibitions for its grand opening, and this is not including Katharina Grosse’s ‘Yes no why later’ installation in the temporary pavilion, which was completed by the Pritzker prize laureate Shigeru Ban.

Both Russian and international art are showcased. Among them, Erik Bulatov’s ‘Come to Garage!’ installation and Georgy Kiesewalter, who was a key contributor to the Moscow underground art scene in the ’70s, represented Russian art. In the international art department, Yayoi Kusama and Rirkrit Tiravaniya, a Japanese and a Thai born in Argentina respectively, represent two very different artists in both character of creativity and in the methods of influencing the audience. Kusama’s exhibition titled ‘Yayoi Kusama: Infinity Theory’ comprises of two installations complemented by a film of the performance ‘Kusama’s Self Obliteration’ and a slide film, ‘Walking Piece’ from 1966. An interesting piece of information to note: the building in which ‘Walking Piece’ is being presented now was built in 1968, two years after one of Kusama’s best known works was produced, adding to the connotation of its display. With regards to the curators’ choice, the two main installations are ‘Infinite mirror room – The Souls of Millions of Light Years Away’, 2013, and ‘Guidepost to the Eternal Space’, 2015. Both of the installations unsettle the audience by dipping into Yayoi Kusama’s world, which honestly has no end.

Tens of metres away, at the Central Gallery and Skylight Gallery of the Museum, is where Rirkrit Tiravaniya presented his artistic methods. He does it right in the museum space by cooking, serving, and offering pelmeni (Russian dumplings) to guests. For his ‘Tomorrow is the question?’ exhibition, the space is transformed into a surreal place for leisurely passing time, filled with custom-black ping pong tables and a small ‘factory’ for t-shirt production. While such transformations of museums may seem foreign to the Moscow audiences, it is the norm for Tiravaniya. However, the artist also incorporated familiar constructions in the form of two “stations” which the audience may recognise as bus stops from the soviet era. In other parts of the museum, guests may find the project ‘Field research’, which is composed of four parts. ‘Field research’ is the first cross-disciplinary ‘Garage’ program in a contemporary art museum in Russia. Established in 2013, it gives a new perspective on events, actors, and philosophical beliefs of Russian culture. Each research project lasts 1-3 years, and has no predetermined outcome. At the exhibition, the audience may look at four current projects being presented at various stages of development, they are ‘Saving Bruce Lee: African and Arab cinema and the era of Soviet cultural diplomacy’ by Koyo Kouoh and Rasha Salti, ‘Black square XVII’ by Taryn Simon, ‘This is cosmos’ by Anton Vidokle, and ‘Face-to­face: the American national exhibition in Moscow, 1959/2015’ by a group of researches from The Museum of American Art in Berlin. 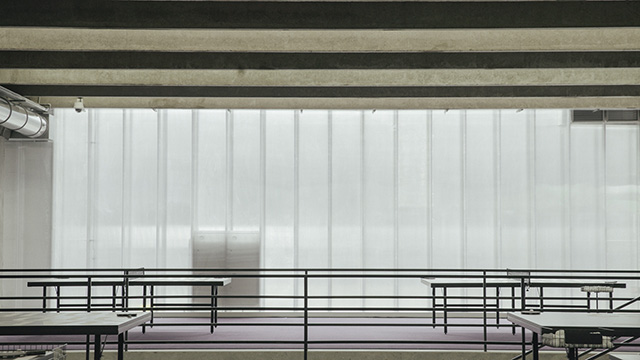 “Garage is a place where history is created”, said Anton Belov, the director of museum, at the press conference devoted to the opening. You can trust his words—history is being written right here and now, and it is not passing any one of us by.